Rajnath invites US defence companies to invest in India, support 'Make in India' 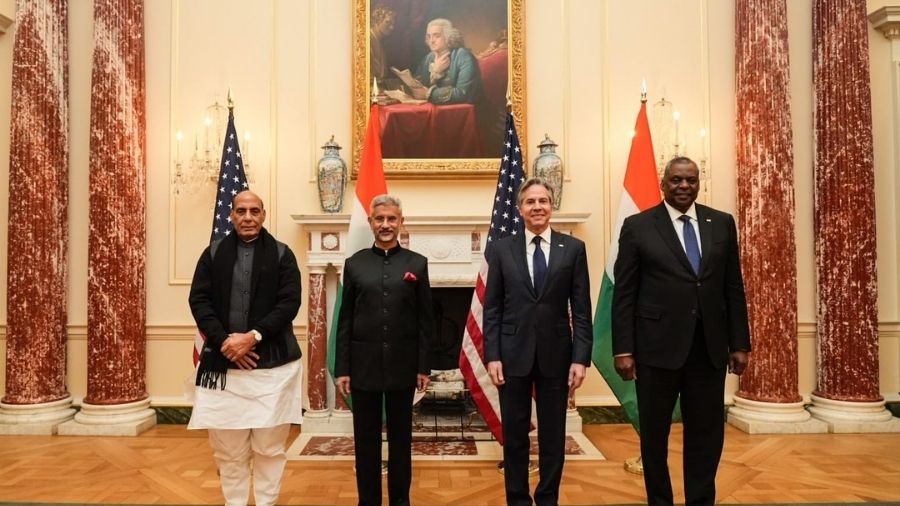 The discussions during the India US 2+2 ministerial here has helped the two countries to strategize on mitigating the volatility and unpredictability that the world is currently experiencing, External Affairs Minister S Jaishankar said on Monday.

"It has helped us today to strategize on mitigating the volatility and unpredictability that the world is currently experiencing. That will be naturally reflected in our policies," Jaishankar told reporters addressing a joint news conference with Defense Minister Rajnath Singh and their American counterparts Secretary of State Antony Blinken and the Defense Secretary Lloyd Austin.

The fourth 2+2, the first under the Biden administration, was held here on Monday.

The discussions have also encouraged the two countries to think together on long-term challenges, especially in the Indo-Pacific. "It has energized our collaborative endeavours to build what is emerging as a key bilateral relationship of our times," he said.

"While we're also addressing the humanitarian situation, in fact, we have -- the Ukrainians have been in touch with us for -- especially for the supply of medicines. We have already provided humanitarian relief to Ukraine to some of the neighbours. And even as we speak, a shipment of medicines is being delivered or will be delivered very soon to Kiev," he said.

The minister said that one of the big concerns that India and the world has is of energy security, of rising prices, of increasing premiums, of limited supplies. "So today you have to understand it is a legitimate concern of countries to ensure their energy security. But an equally big worry, which is emerging, is of food security. There are concerns across geographies of societies who are importing wheat or sugar or other foodstuff out of the conflict region".

The issue also came up for discussion during the virtual summit between Prime Minister Narendra Modi and President Joe Biden, about what could India do to stabilize the global economic situation.

"We are quite willing and, in fact, we have already started responding to the need for greater food supplies, especially wheat, most of all; but to some degree, sugar as well. We have even at this moment a number of countries are discussing with us the possibility of greater food supplies, including the World Food Programme," he said.

Jaishankar said COVID-19 has also left them with a lot of uncertainties and a lot of challenges to be addressed. "I think part of it is how do you construct more reliable and resilient supply chains? How do you increase trust and transparency? How do we work together on critical and emerging technologies like 5G? And again, we discussed an Indian initiative called Performance Linked Initiative, which would incentivize manufacturing in India".

It is very much in American interest to support it, the minister said.

"We also spoke about how we could work together to help with the global health situation. How do we get a shot in every arm? How do we increase the distribution of vaccines? And the other issue, again, which has added to global uncertainty is Afghanistan. And how do you stabilize the region, how do you again provide humanitarian assistance? he told the reporters.

India, he said, is in the middle of providing 50,000 tons of wheat. "How do you deal with the terrorism concerns that the world has in the Security Council, in FATF, et cetera. And I would say in a way, in terms of mitigating and stabilizing, the Quad itself is a great stabilizer. So that too is part of the contribution we are making towards a better world, and making that contribution in large measure through a partnership with the United States," said the minister.

Rajnath invites US defence companies to invest in India, support 'Make in India'

Defence Minister Rajnath Singh on Monday urged American companies to come and invest in India and support the 'Make in India' programme.

"I have talked to American companies for Make in India and aerospace and world programme. I have invited them for these programmes," Singh told reporters at a joint news conference with External Affairs Minister S Jaishankar along with their American counterparts Defence Secretary Lloyd Austin and Secretary of State Tony Blinken.

"We are talking to US companies for co-development and co-production. We are proposing it to them. We have asked the US companies to work in the UP and Tamil Nadu corridor and invest in that area," he said at the conclusion of the India-US 2+2 ministerial, the first of the Biden administration.

"I have insisted that India would focus on co-developmental productions and all the investors should come to India. They are welcome. And because in India they can develop the 'Make in India' because we want to build and make everything in India," Singh told reporters in response to a question.

Earlier, in his opening remarks at the 2+2 ministerial, Singh said that India places the highest priority upon the strategic partnership with USA. "Major defence partnership is one of the most important pillars of India-US strategic relations, he said.

"As the largest country and the centre to Indian Ocean, and as a democracy, India has critical roles to play in the Indian Ocean region and in the wider Indo-Pacific following the Act East and the Neighbourhood First policy," he said.

India played preeminent role in the region, from the Tsunami in 2004 and during the COVID pandemic. "We have signed eight different defence-related agreements between our two countries in last few years, including a Space Situational Awareness Agreement for unclassified domain, which is being signed today," he added.

Despite the pandemic, India-USA military engagements increased with higher capability in communication, closer information sharing, and enhanced mutual logistic support, he said adding that this is a reflection of their growing depth and scale of the defense partnership.

"In a decade, our defense suppliers from USA rose from negligible to a cumulative around of over USD 20 billion. We look forward to US companies investing in India and support the Make In India programme," he said.

"We look forward to further enhancing the depth and the scope of our defense cooperation to give effect to our shared vision of a free, open, inclusive, and a rules-bound Indo-Pacific and the Indian Ocean region," he said.

India, he said, is working with the US to double up capabilities across conventional and emerging defense domains. "We have made good progress in a number of defense cooperation activities since the visit of Secretary Austin to India in March 2021".

US: Don’t raise volume of oil trade with Russia