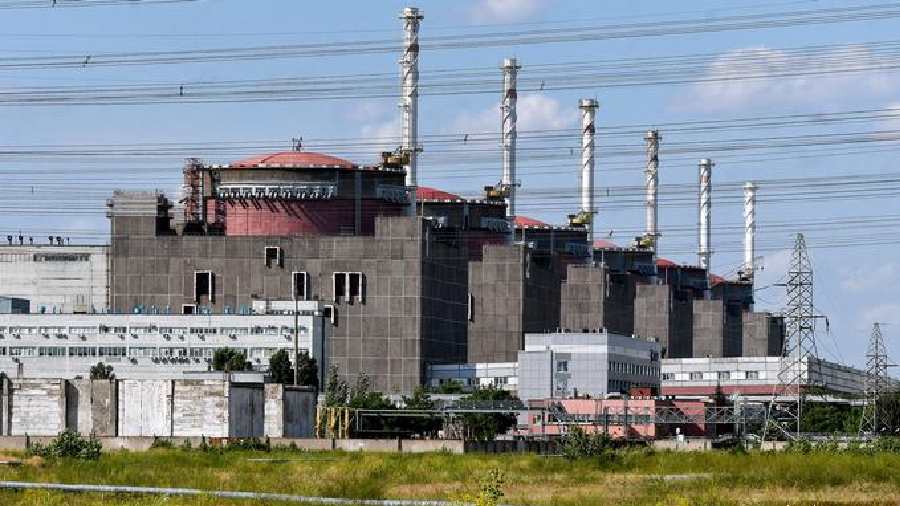 India has expressed concern over reports of shelling near the spent fuel storage facility of the Zaporizhzhia Nuclear Power Plant in Ukraine that could have "potentially serious consequences" for the people and called for mutual restraint to ensure that safety and security of nuclear facilities in the war-torn country are not endangered.

The head of the UN's nuclear watchdog told an emergency meeting of the Security Council on Thursday that fighting close to the Zaporizhzhia nuclear power plant in Ukraine had caused some damage to the facility and called for an immediate inspection mission to be allowed to visit the plant.

"We continue to carefully follow developments regarding the safety and security of Ukraine's nuclear power reactors and facilities," India's Permanent Representative to the United Nations, Ambassador Ruchira Kamboj, said at the open meeting in the Security Council on the situation at the Zaporizhzhia Nuclear Power Plant.

"India attaches high importance to ensuring the safety and security of these facilities, as any accident involving nuclear facilities could potentially have severe consequences for public health and the environment," she said.

Kamboj said India expresses its concern over the reports of shelling near the spent fuel storage facility of the Zaporizhzhia NPP.

"We call for mutual restraint so as not to endanger the safety and security of nuclear facilities," she said.

Earlier, Director General of the International Atomic Energy Agency (IAEA) Rafael Mariano Grossi told the UNSC meeting that on August 5, the Zaporizhzhia plant, Europe's largest was subjected to shelling, which caused several explosions near the electrical switchboard and a power shutdown.

Ukraine has informed the IAEA that 10 of the country's 15 nuclear energy reactors, two at the Zaporizhzhia nuclear plant, three at the Rivne NPP, three at the South Ukraine NPP and two at the Khmelnytskyy NPP, are currently connected to the grid.

UN Secretary-General Antonio Guterres has expressed grave concern about the unfolding situation in and around the Zaporizhzhia NPP in southern Ukraine and appealed to all concerned to exercise "common sense and reason" and not to undertake any actions that might endanger the physical integrity, safety or security of the nuclear power plant.

A spokesperson for the UN chief said regrettably, instead of de-escalation, over the last several days, there have been reports of further deeply worrying incidents that could, if they continue, lead to disaster.

"The Secretary-General calls for all military activities in the immediate vicinity of the plant to cease immediately and not to target its facilities or surroundings. He urges the withdrawal of any military personnel and equipment from the plant and the avoidance of any further deployment of forces or equipment to the site," the spokesperson said.

Guterres said the facility must not be used as part of any military operation and stressed that an urgent agreement is needed at a technical level on a safe perimeter of demilitarisation to ensure the safety of the area.

Kamboj underlined that India accords high priority to the discharge by the IAEA of its safeguards and monitoring activities, in accordance with its statute in an effective, non-discriminatory and efficient manner. She said New Delhi values the efforts of the IAEA on this issue.

Guterres added that the UN continues to fully support the critical work of the IAEA and its efforts to ensure the safe operations of the Zaporizhzhia NPP. The secretary-general urged the parties to provide the IAEA mission with immediate, secure and unfettered access to the site.

"We must be clear that any potential damage to Zaporizhzhia or any other nuclear facilities in Ukraine, or anywhere else, could lead to catastrophic consequences not only for the immediate vicinity but for the region and beyond. This is wholly unacceptable," Guterres said.

Russia's capture of the Zaporizhzhia NPP has renewed fears that the largest of Ukraine's 15 nuclear reactors could be damaged, setting off another emergency like the 1986 Chernobyl accident, the world's worst nuclear disaster, which happened about 110 kilometres north of the capital Kyiv.

Kamboj said India also continues to remain concerned over the situation in Ukraine. Since the beginning of the conflict, India has consistently called for an immediate cessation of hostilities and an end to violence.

"We have called upon both sides to return to the path of diplomacy and dialogue. We support all diplomatic efforts to end the conflict," Kamboj said.

While nations discuss the nuclear dimension of this conflict, Kamboj said, "We need also to be acutely cognizant of the impact of the Ukraine conflict on developing countries, particularly, on the supply of foodgrains, fertilisers and fuel. It is important for all of us to appreciate the importance of equity, affordability and accessibility when it comes to foodgrains. Open markets must not become an argument to perpetuate inequity and promote discrimination".

India welcomed the UN Secretary General-backed initiative to open the exports of grains from Ukraine via the Black Sea and facilitate the exports of Russian food and fertilisers.

"These efforts demonstrate that differences can be resolved through sustained dialogue and diplomacy, which has been the consistent position of India," Kamboj said.

India reiterated that the global order should be anchored on international law, the UN Charter and on respect for the territorial integrity and sovereignty of states.

The UN nuclear watchdog chief also warned on Thursday that "very alarming" military activity at Europe's largest nuclear plant in southeastern Ukraine could lead to dangerous consequences for the region and called for an end to combat actions there.

Rafael Grossi urged Russia and Ukraine, who blame each other for the attacks at the plant, to immediately allow nuclear experts to assess the damage and evaluate safety at the Zaporizhzhia facility.