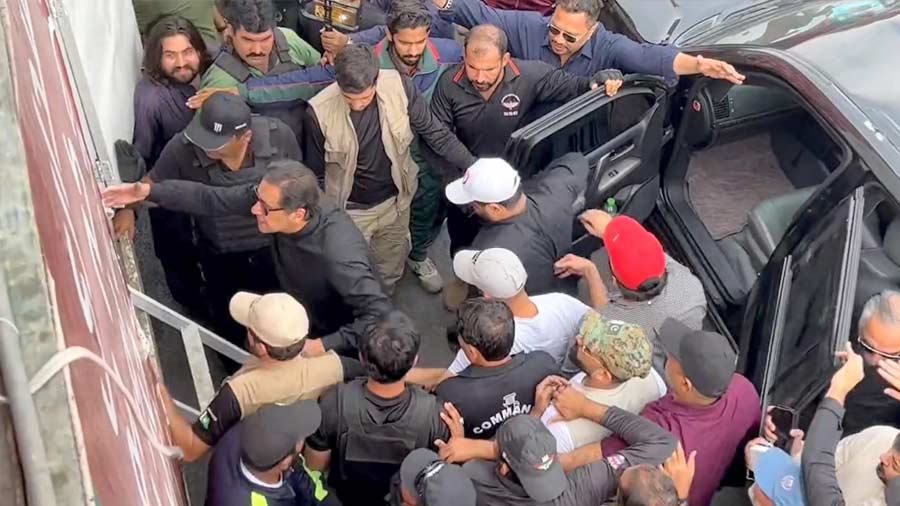 Imran Khan's Pakistan Tehreek-e-Insaf party is poised to resume its stalled long march on Thursday from Wazirabad in Punjab province, where an assassination attempt was made on the former premier last week.

The long march to Islamabad, demanding fresh general elections, was suspended following the attack on Khan.

Khan, 70, suffered bullet injuries in the right leg when two gunmen fired a volley of bullets at him and others standing on a container-mounted truck in the Wazirabad area, where he was leading the march on November 3.

He underwent surgery for bullet injuries at the Shaukat Khanum Hospital owned by his charitable organisation.

He is advised to take rest for four to six weeks by doctors.

The former cricketer-turned-politician, who is recovering from injuries, had announced resumption of the long march on Tuesday but later the party changed the decision and rescheduled it for Thursday.

He would join the long march in Rawalpindi when it reaches there in 10 to 14 days.

"The long march will resume with prayers for those killed and injured in the shooting. A sea of people will reach Islamabad to push the coalition government of 13 parties led by the Pakistan Muslim League-Nawaz (PML-N) to announce the date for early elections," she said.

During a meeting presided by Khan at his Lahore residence on Wednesday, it was decided that the "Haqeeqi Azadi" march would move towards Rawalpindi from the spot following a public gathering.

The federal government has not yet granted permission to PTI to hold its rally in Islamabad.

In a statement, the Pakistan Tehreek-e-Insaf (PTI) party said leaders from Faisalabad and other parts of the country would move towards Rawalpindi in groups, while more convoys will reach the city in the third week of November, Geo TV reported.

Meanwhile, a three-member probe panel would be formed on Thursday, which will provide details of the investigation done by local police to the joint investigation team, it added.

One person was killed and 11 others, including Khan, were injured in the attack during the long march.

Khan has alleged that Prime Minister Shehbaz Sharif, Interior Minister Rana Sanaullah and Major General Naseer were part of a plot to assassinate him in the same way former Punjab governor Salman Taseer was killed in 2011 by a religious extremist.

Khan, who was ousted as prime minister in april this year after a no-confidence motion was passed in the National Assembly, is seeking fresh general elections in Pakistan.

However, the federal government led by Prime Minister Sharif is opposed to holding elections now. The term of the current National Assembly will end in August 2023.

The political turmoil in Pakistan comes as it reels from the economic crisis and the effects of devastating floods.