How is China trying to redefine power balance in Taiwan Strait? 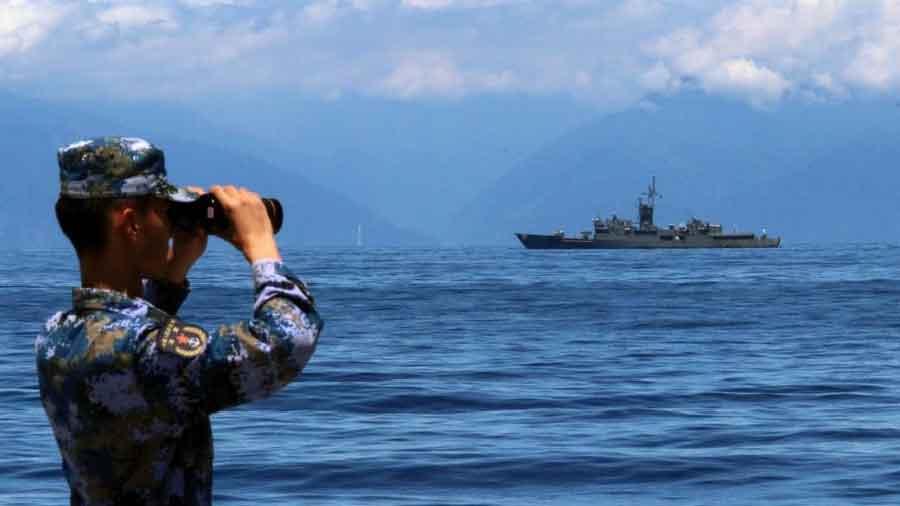 The military drills represent some of Beijing's most provocative action toward Taiwan in decades
Deutsche Welle
William Yang   |   Published 13.08.22, 05:23 PM

Beijing's pledge to conduct "regular patrols" near Taiwan after large-scale military drills points to a worrisome and dangerous development, according to analysts.

After seven days of large-scale military exercises around Taiwan, the Chinese People's Liberation Army announced on Wednesday that the drills — held in response to a recent visit to the island by US House Speaker Nancy Pelosi — had concluded.

Beijing, however, pledged to continue "regular combat readiness patrols" in the area, raising the possibility of frequent Chinese military operations near the self-governed democratic island.

"I believe the Chinese are trying to change the status quo and create a new normal in the Taiwan Strait," said Bonnie Glaser, director of the Asia program at the German Marshall Fund.

"China decided they wanted to do something unprecedented and they wanted to demonstrate the development in their military capabilities and show their resolve," she added. "I'm concerned about the fact that they were explicitly demonstrating they can implement a blockade."

In a white paper published on Wednesday, China said it had zero tolerance for "separatist activities" in Taiwan.

While underlining its goal to achieve the "peaceful reunification" of Taiwan and China, Beijing also stressed that it "will not renounce the use of force, and we reserve the option of taking all necessary measures."

China also went on to threaten to use force against "interference by external forces or radical action by separatist elements."

US 'will not allow' isolation of Taiwan

The drills held in the wake of Pelosi's visit represent some of China's most provocative action toward Taiwan in decades.

During the exercises, the Eastern Theater command of the Chinese People's Liberation Army dispatched ships and fighter jets that regularly crossed the median line — an unofficial demarcation between China and Taiwan that the former does not recognize.

It also held anti-submarine drills, aimed at enhancing the ability of air and sea units to work together while hunting submarines.

In Washington, Pelosi said on Wednesday that she was "very proud" of her delegation and believed China had used her visit as a "pretext" to launch its military exercises.

"We will not allow China to isolate Taiwan," she told reporters.

She also said the US could not allow Beijing to standardize a new level of pressure on Taiwan. "What we saw with China is that they were trying to establish sort of a new normal. And we just can't let that happen."

Beijing, however, retaliated by saying that Washington was the one that broke promises and violated China's sovereignty. "The US took the initiative to make provocations and then China responded with countermeasures, which are legitimate, justified, necessary and proper," Chinese Foreign Ministry Spokesperson Wang Wenbin said during Wednesday's daily press briefing.

'A new baseline for crisis protestation'

The ratcheting up of tensions between China and the US, and Beijing's pledge to conduct "regular patrols" near Taiwan, point to a worrisome and dangerous development, said Christopher Twomey, an expert on security affairs at the US Naval Postgraduate School in California.

"We could see the continued operation of Taiwanese forces and occasional transits of US forces in international waterways, and the more Chinese forces are routinely operating there, the more dangerous that is," he stressed.

"One of the real worries here is that the next time there is a political or diplomatic move that China feels that it needs to respond to, the Chinese may have to do even more next time. The idea that this being the new baseline for crisis protestation is also important to note."

While analysts have expressed concerns about China's aggressive military moves, the US said recent events had not changed its assessment that Beijing would not launch an invasion of Taiwan in the next two years.

Brian Hart, a fellow at the Center for Strategic and International Studies in the US, said Washington was trying to de-escalate the situation while not giving the impression that it was backing down in the face of Chinese pressure.

Hart stressed that Washington should continue its cooperation with Taipei in accordance with its longstanding official policy. "Instead of being loud and highly visible, do it in a way that's quieter while still making real substantial gains for Taiwan and US-Taiwan relations," he suggested.

The United States is Taiwan's primary military backer, selling Taipei much-needed weapons and defense tech. For decades, Washington has sold arms to the island under the Taiwan Relations Act, which allows for the supply of "defensive" weapons.

Since 2019, Taiwan has ordered at least $17 billion (€16.65 billion) worth of US military equipment, according to Defense News. This includes an $8 billion order of 66 F-16 fighter jets under former President Donald Trump, one of the largest single orders ever.

Preparing for the new status quo?

Twomey, from the US Naval Postgraduate School, said one of the outcomes that he hoped to see from China's recent military exercises was a more serious adoption of asymmetric or "porcupine" capabilities and strategies by Taiwan, and less emphasis on expensive hardware such as fighter jets or large-scale naval platforms.

"They should focus more on enhancing the reserves and building up stockpiles of anti-ship cruise missiles that can be launched from coastal areas," he said.

To better prepare for the new status quo that Beijing is pushing for, Tzu-yun Su, an analyst at the Institute for National Defense and Security Research in Taiwan, said Taipei needed to show the rest of the world that it was not only relying on other countries to ensure its own security.

"Taiwan should also increase its defense budget, which Germany did earlier this year following the Russia-Ukraine war," he pointed out. "Additionally, Taiwan should prioritize military investment for ground-based air-defense missiles or ground-based anti-ship missiles, which form a more effective defense force quickly."