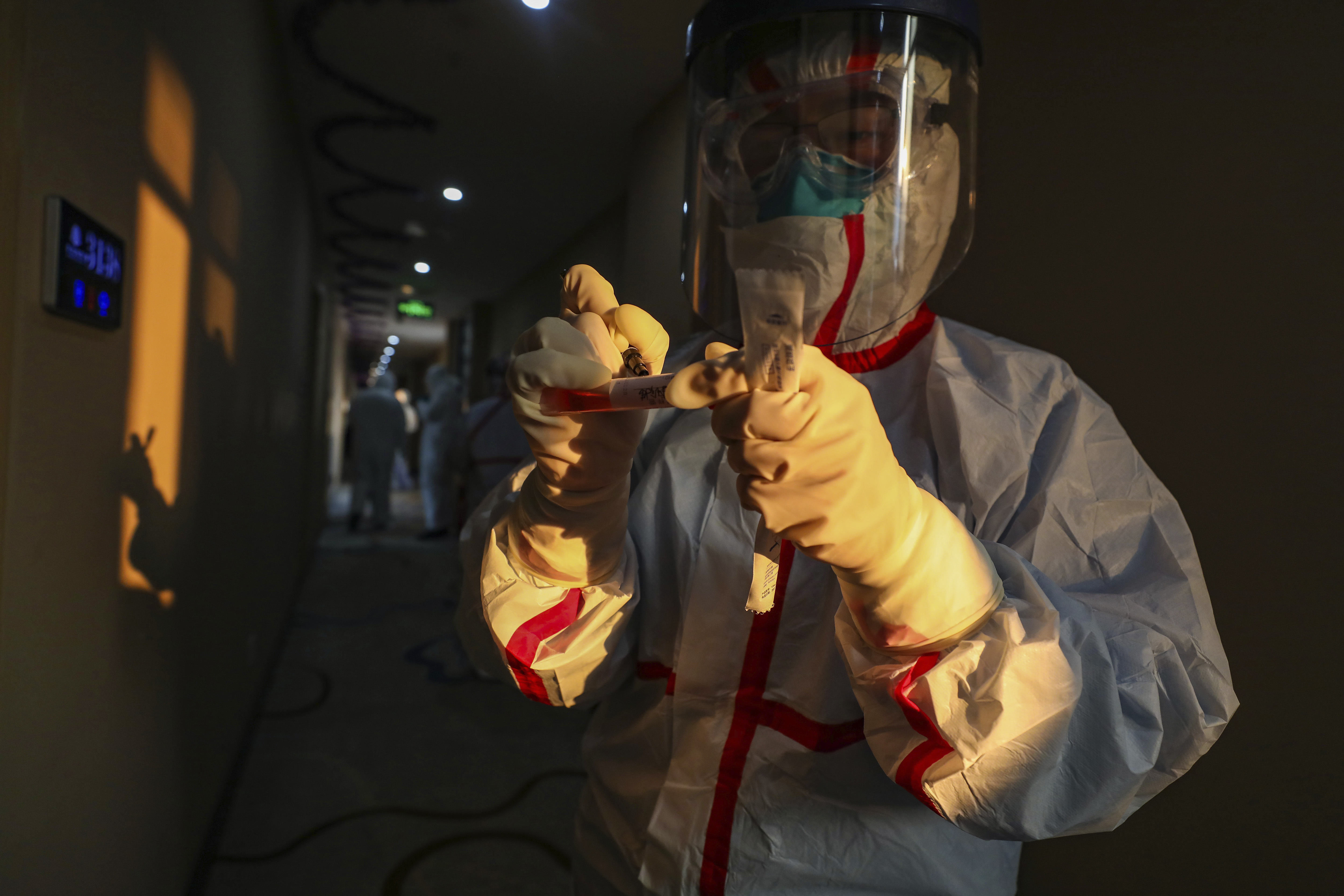 A medical worker in a protective suit writes on a tube after collecting a sample for nucleic acid tests from a suspected virus patient in Wuhan
(AP)
Reuters   |   Beijing   |   Published 04.02.20, 08:24 PM

Hong Kong reported its first coronavirus death on Tuesday, the second outside mainland China from a fast-spreading outbreak that has killed 427 people and threatened the global economy.

The Chinese-ruled gambling hub of Macau asked casino operators to close for two weeks to help curb the virus. And in the latest major corporate hit, Hyundai Motor was to gradually suspend production at South Korean factories because of supply chain disruptions.

Hong Kong’s first fatality was a 39-year-old man with an underlying illness who had visited Wuhan city, the epicentre of the outbreak.

Chinese authorities, meanwhile, reported a record daily jump in deaths of 64 to 425. The only other death outside mainland China was a man who died in the Philippines last week after visiting Wuhan, the virtually quarantined city at the epicentre of the outbreak.

Total infections in mainland China rose to 20,438, and there have been nearly 200 cases elsewhere across 24 countries and China’s special administrative regions Hong Kong and Macau.

Thailand’s tally of infections jumped to 25, the highest outside China, while Singapore’s rose to 24, four of those from local contagion as opposed to visitors from China.

New cases were reported in the US, including a patient in California infected via someone in the same household who had been infected in China.

The World Health Organisation (WHO) has declared the flu-like virus a global emergency and experts say much is still unknown, including its mortality rate and transmission routes.

The outbreak did not constitute a pandemic but an epidemic with “multiple foci”, WHO director of global hazard preparedness Sylvie Briand said in Geneva.

The uncertainties have spurred strong measures by some countries — offending Beijing's communist government which has called for calm, fact-based responses instead of scaremongering.

The deluge of misinformation on social media — from a recommendation to eat more onions to a warning of spread via a video game — has led Asian governments to hit back with arrests, fines and fake news laws, alarming free speech advocates.

At least 16 people have been arrested over coronavirus posts on social media in Malaysia, India, Thailand, Indonesia and Hong Kong.

Australia sent hundreds of evacuees from Wuhan to an island in the Indian Ocean, while Japan began screening some 3,700 passengers and crew aboard a cruise liner held in quarantine at the port of Yokohama, after a Hong Kong passenger who sailed on the vessel last month tested positive.

Thousands of medical workers in Hong Kong, which had seen months of anti-China political protests, held a second day of strikes to press for complete closure of borders with the mainland after three checkpoints were left open.

“We’re not threatening the government, we just want to prevent the outbreak,” said Cheng, 26, a nurse on strike.

The Asian financial centre has confirmed 17 cases of the virus.

Hong Kong was badly hit by Severe Acute Respiratory Syndrome (SARS), another coronavirus that emerged from China in 2002 to kill almost 800 people worldwide and cost the global economy an estimated $33 billion.

Chinese data suggest the new virus, while much more contagious, is significantly less lethal, although such numbers can evolve rapidly.

The WHO’s Briand said most who had died or suffered severe infections were people with underlying conditions such as cancer, diabetes or suppressed immune systems, or the elderly.

Raising the prospect of another major spat, Beijing on Monday accused the US of spreading panic.