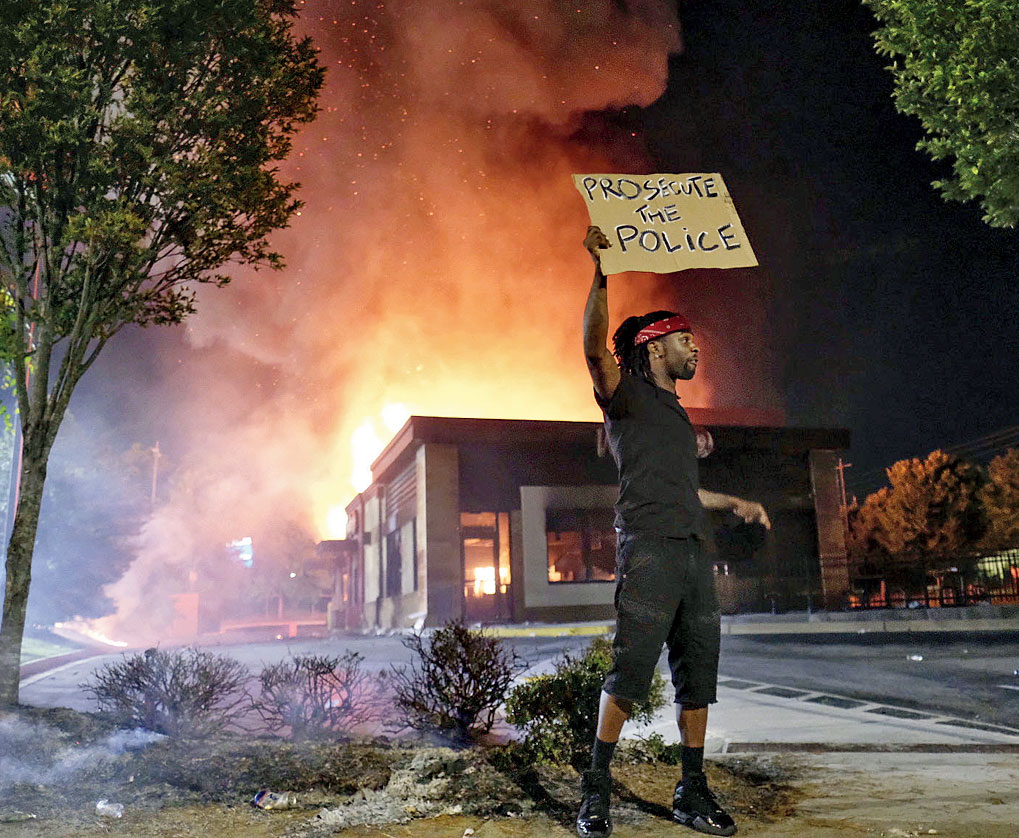 Protesters shut down a major highway in Atlanta on Saturday and burned down a Wendy’s restaurant where a black man was shot dead by police as he tried to escape arrest, an incident likely to fuel more nationwide tensions over race and police tactics.

The restaurant was in flames for more than 45 minutes before fire crews arrived to extinguish the blaze, protected by a line of police officers, local television showed. By that time the building was reduced to charred rubble next to a gas station.

Other demonstrators marched onto Interstate-75, stopping traffic, before police used a line of squad cars to hold them back.

Near the scene of the shooting, street protests began on Saturday, with more than 100 people calling for the officers to be charged criminally in the case. Friday’s shooting came after police were called to the Wendy’s over reports that Brooks had fallen asleep in the drive-through line. Officers attempted to take him into custody after he failed a field sobriety test, according to the Georgia Bureau of Investigation.

A bystander’s video showed Brooks struggling with two officers on the ground outside the Wendy’s before breaking free and running across the parking lot with what appears to be a police Taser in his hand.

A second videotape from the restaurant’s cameras shows Brooks turning as he runs and possibly aiming the Taser at the pursuing officers before one of them fires his gun and Brooks falls to the ground.

Brooks ran the length of about six cars when he turned back towards an officer and pointed what he had in his hand at the policeman, Vic Reynolds, director of the GBI, told a media conference.

“At that point, the Atlanta officer reaches down and retrieves his weapon from his holster, discharges it, strikes Brooks there on the parking lot and he goes down,” Reynolds said.

At a news conference in downtown Atlanta on Saturday night, L. Chris Stewart, a lawyer for the Brooks family, disputed the official account of the shooting.

He said that witnesses told his team that they did not see the police conduct a field sobriety test on Brooks. He said they did see him talking with officers in a “civil” manner while standing outside of his car.

Stewart repeatedly said that a Taser was not considered a deadly weapon, and that there was no reason to shoot Brooks because he had one in his hands. He also said that the police could have easily cornered Brooks and arrested him, instead of chasing him and shooting him.

“His life was not in immediate harm when he fired that shot,” Stewart said of the officer.