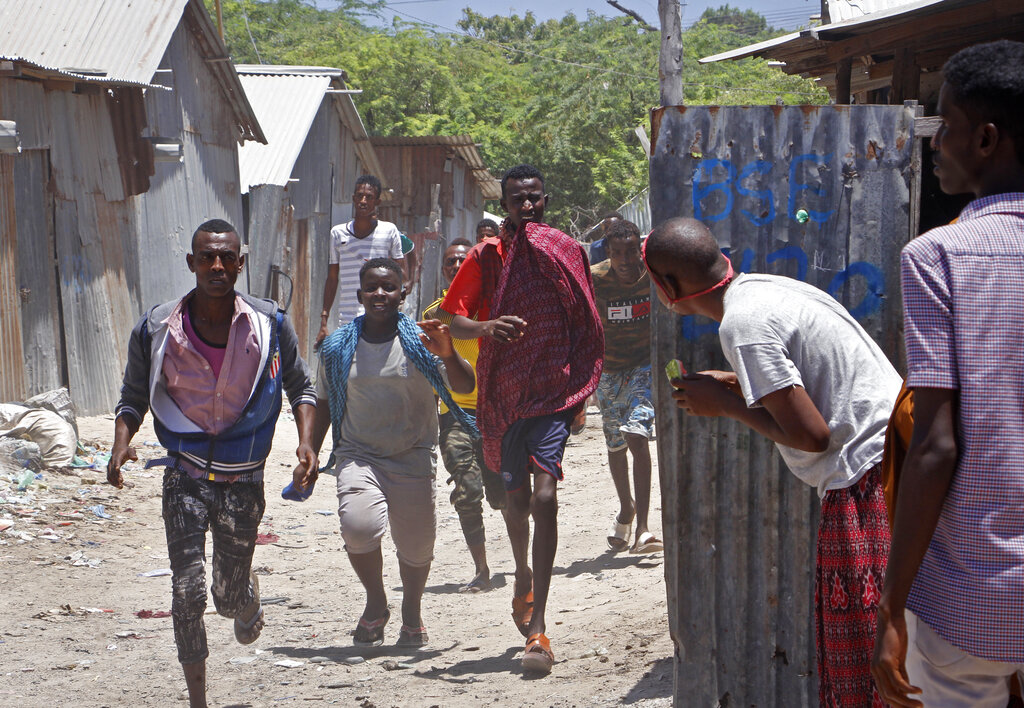 Somali civilians run for cover during an ongoing fighting between government soldiers and gunmen after the suicide car bomb attack on a government building in Mogadishu on Saturday.
AP
AP   |   Mogadishu   |   Published 23.03.19, 10:47 AM

At least 5 people, including the deputy labour minister, was killed in an attack by Islamic extremists in the Somali capital on Saturday.

Five gunmen stormed into a government building in Mogadishu following a suicide car bombing at the gates, a police officer said, in the latest attack by Islamic extremist fighters in the Horn of Africa nation.

Somali security forces were fighting to neutralise the attackers and rescue public servants trapped inside the Mogadishu building, which houses the ministries of labour and works, police captain Mohamed Hussein said.

Dozens of people were believed to be inside the building at the time of the attack since Saturday is a working day in Somalia.

Gunfire could be heard from inside the building as a smoke billowed from the scene, according to witnesses.

Al-Shabab claimed responsibility for the ongoing attack, saying that its fighters were inside the building, which is located not far from the headquarters of the Somali intelligence agency.

A woman stands behind wreckage left from the suicide car bomb attack.
AP

A similar attack targeting a busy area in Mogadishu in February-end killed at least 24 people. That attack also began with a pair of car bombs exploding in a popular area of Mogadishu, where Somalis were relaxing at restaurants.

Al Shabab, Africa's most active Islamic extremist group, has been fighting for years to take power and create an Islamic state in Somalia.

The group continues to mount lethal attacks despite being pushed out of Mogadishu. It mostly operates from rural areas in the country's south.

African Union peacekeepers stationed in Mogadishu and elsewhere in the country have helped Somali forces to keep al Shabab fighters at bay.

The group has carried out many deadly attacks in neighbouring Kenya in retaliation over Kenya's deployment in 2011 of peacekeepers in Somalia.

The US military has carried out a number of deadly airstrikes in recent months against al Shabab.