Advertisement
Home / World / Getting worse with each decade

Getting worse with each decade 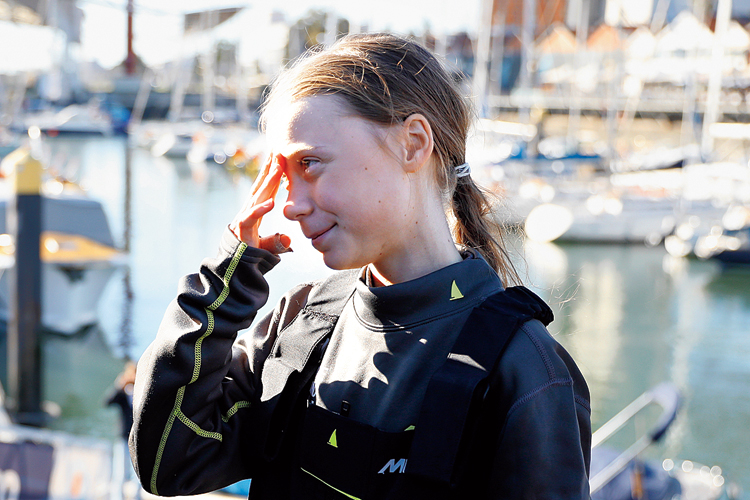 Swedish climate activist Greta Thunberg, who refused to take a plane because of emissions, after arriving in Lisbon on Tuesday aboard a sailboat
(AP photo)
Jayanta Basu   |   Madrid   |   Published 03.12.19, 08:53 PM

The current decade, 2010-2019, has been the warmest ever recorded and Earth is headed for a 3 to 5°C temperature rise unless countries rapidly cut greenhouse gas emissions, the World Meteorological Organisation (WMO) said on Tuesday.

The global agency, in a report released on the sidelines of a UN climate conference that opened in Madrid, Spain, on Monday, has also warned of an accelerated mean sea level rise that scientists say could impact multiple sites worldwide, including the Sunderbans.

A senior WMO official said the rate of sea level rise in the Sunderbans was among the highest in the world, touching 8mm a year in contrast to the global average of 3 to 4mm a year.

The agency’s provisional State of the Global Climate report said 2019 was on course to be the second or third warmest year on record with global average temperature from January to October about 1.1°C above the pre-industrial-era average. The year 2016 has been the warmest thus far.

The report has cautioned that global warming trends have actually worsened since the Paris climate pact in 2015 under which countries had pledged to cut or curb Earth-warming greenhouse gas emissions to cap the average temperature rise at 2°C.

“Major greenhouse gases like carbon dioxide… have reached record levels and the situation has worsened since the Paris agreement,” Petteri Taalas, the WMO’s secretary-general said. Carbon dioxide has crossed a critical level of 400 parts per million (ppm) and is now at a record high of 407ppm, up from 405ppm in 2017.

The WMO has named Bulbul and Fani among 2019’s top six cyclones but has also underscored the country’s response to the storms that led to only a moderate loss of lives.

The year’s other big cyclones are Idai to hit Mozamique, Hurricane Dorian in the Bahamas, Typhoon Hagibis in Japan and Typhoon Lekima in China.

The WMO warned that melting ice sheets in Antarctica and Greenland may have contributed to the accelerated mean sea level rise. The average sea level rise is currently 3 to 4mm per year, compared to 1 to 2mm during the past century.

However, several hotspots, including the Sunderbans adjoining the Bay of Bengal on the southern fringes of Bengal and Bangladesh, have recorded up to 8mm sea level rise rates.

A representative of the climate organisation 350.org told this newspaper that the WMO report was a “terrifying reminder” that the world was running out of time. “This climate conference is an opportunity to world leaders to show that they have understood the irrefutable scientific evidence and will now roll out clear plans for urgent reductions in greenhouse gas emissions.”