Chancellor Scholz was under pressure to deliver weapons, but in the end Ukraine's EU candidacy took centrestage 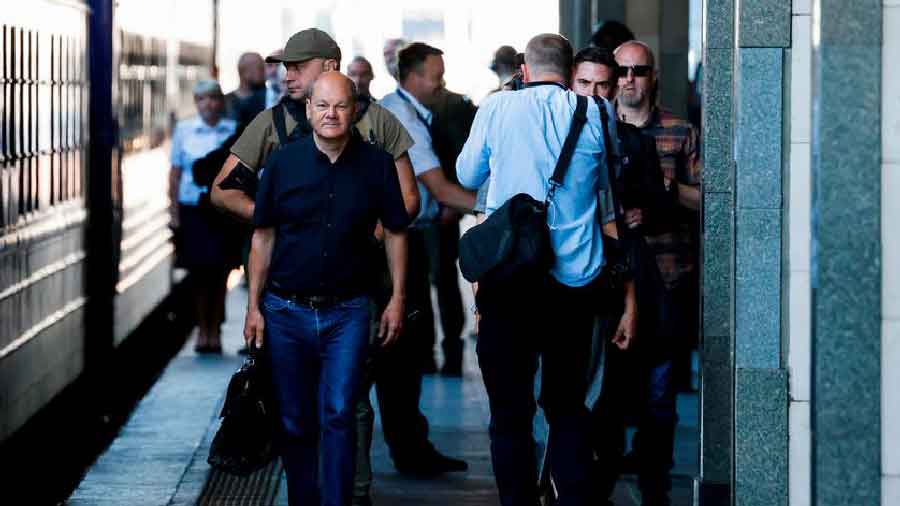 The German chancellor was under pressure in Kyiv for his reluctance to deliver heavy weapons. In the end, Ukraine's EU membership candidacy took center stage and made his train trip a success.

When Olaf Scholz stepped out of his overnight train at Kyiv's main station Thursday morning in jeans and a black short-sleeved shirt, one aim of his trip was already fulfilled. According to observers, the fact the journey even took place was a success. While other leaders were quick to visit Ukraine after it was invaded by Russia, Scholz took his time — and was roundly criticized for it at home and abroad.

The reason? Discord over Kyiv's April snub of German President Frank-Walter Steinmeier, who was deemed unwelcome in the Ukrainian capital. With Scholz's visit, it appears that wrinkle in German-Ukrainian relations has been at least partially smoothed. Scholz traveled with French President Emmanuel Macron and Italian Prime Minister Mario Draghi, while Romanian President Klaus Iohannes met up with them when they arrived.

No keys for new German tanks just yet

The controversial topic of German heavy arms deliveries remains. Those who expected Scholz to pull a bundle of keys for new German tanks out of his pocket to quiet critics were disappointed. At a group press conference the chancellor made no promise to deliver new arms despite the fact that the need grows daily due to heavy fighting in the eastern Donbas region. Instead, he repeated earlier promises to deliver howitzers, Gepard (Cheetah) tanks, and multiple rocket launchers (MRLs). He did not say when. French President Macron promised to deliver new howitzers but nothing more.

Whether in the Kyiv suburb of Irpin, which was heavily shelled and almost entirely occupied by Russian forces in March; or on the heavily militarized, sand-sacked streets of the capital, it was impossible for the chancellor not to see or hear the war in Ukraine.

The sun may have been shining and Kyiv's cafes well-visited, but air raid sirens reminded the European guests of the threat posed by Russian rockets almost as soon as they stepped off the train. When sirens blared as the politicians stepped up to their podiums on a meadow near the Mariinsky Palace, President Zelenskyy told those gathered that at least 15 rockets hit Ukraine each day.

Despite all that, the trip was, nevertheless, a success. For Scholz offered something that Kyiv needs just as desperately as weapons these days — political solidarity from leading EU countries in support of Ukraine's candidacy for EU membership. Members gathering for an EU summit in the coming weeks are set to decide whether Ukraine will receive that coveted candidacy status.

In Kyiv, Scholz offered his first public statement of support for Ukraine's candidacy. The other leaders echoed his sentiment. All four guests signaled support for Ukraine's EU candidacy, calling it a "historic moment." Ukrainian Foreign Minister Dmytro Kuleba told DW that from Kyiv's perspective, that announcement was the most important thing to come out of the trip. He said other countries previously voicing skepticism would no longer be able to "hide behind Germany."

Scholz remained true to form in Kyiv, giving a sober and objective performance. In a special gesture of solidarity, however, the chancellor ended his press remarks with the words "Slava Ukraini!" ("Glory to Ukraine"). It is a phrase called out by Ukrainian patriots and the official salute of the armed forces.

Ukrainians like Olexiy — not his real name — fight Russian invaders under that slogan each and every day. Olexiy, who just days ago was fighting on the eastern front, is in Kyiv for a short visit. Asked if he is convinced by Scholz and Macron, the soldier says: "We are thankful for everything we get. For every howitzer, for every machine gun."

Still, he says much more is needed to stop Russia. His message to Western leaders: "Wake up already! Give us everything you can. This is your war, too, because your countries are next." But, he adds, he's not too sure Scholz and the others really understand that.