G7 summit in the shadow of Ukraine war

With several key issues on the agenda, the summit is a key opportunity for Chancellor Scholz to show strong leadership 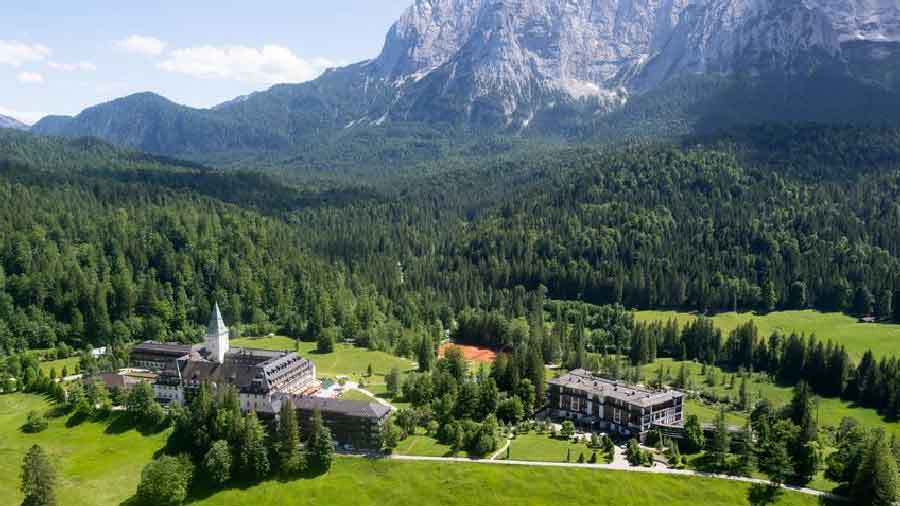 War, climate change, hunger, poverty and health will be on the agenda of the G7 summit in Germany. This will be a key opportunity for Chancellor Olaf Scholz to show strong leadership.

Soaring snow-capped mountains, lush green meadows and blue river valleys: the stunning panorama in southern Bavaria is like something out of a fairy tale. It's here, in the five-star hotel Schloss Elmau, where German Chancellor Olaf Scholz will host this year's G7 summit of leaders from France, the United Kingdom, Italy, Japan, Canada, and the United States, starting on Sunday.

The hotel already proved itself to be the ideal summit venue during Germany's previous G7 presidency in 2015. Along with the dreamlike backdrop for pictures of the political spectacle, its location in a valley above Garmisch-Partenkirchen is hard to reach and easy to secure.

At least 18,000 police officers and a 16-kilometer long (10-mile) security fence will be in place to ensure no demonstrators can disturb the idyll. Guests will be flown in by helicopter. Germany's federal government and the state of Bavaria have budgeted €180 million ($190 million) for security alone.

The idyllic venue stands in stark contrast to the pressing problems which will be discussed. "Progress towards an equitable world" is the motto of the summit, and the Russian invasion of Ukraine and its far-reaching and existential consequences will dominate the talks.

"The G7 is of outstanding importance this year," emphasized German Chancellor Olaf Scholz, who is hoping to send the signal that the G7 is resolute and united.

As host, Germany has a decisive role to play, and Scholz could use this advantage to polish up his tarnished image. Germany has faced much criticism internationally in recent weeks. Shortly after the outbreak of war in February, Scholz announced an about-face in German foreign and security policy and massive rearmament of the Bundeswehr military forces, and then that heavy weapons would be delivered to Ukraine. But the wheels of government turned slowly.

The chancellor was seen as dithering and hesitant. Weapons deliveries were delayed, and Scholz also avoided traveling to Kyiv for several weeks. It seemed as if he was maneuvering — also to avoid completely severing the lines of communication with Russian President Vladimir Putin.

However, the reasons for his hesitation were also much closer to home and within his own political party. The center-left Social Democrats are by no means united when it comes to this so-called "turning point." Pacifism and the conviction that there can be no peace in Europe without Russia's involvement are deeply rooted among the Social Democrats.

Germany as a leading power?

In the face of the Russian army's brutality in Ukraine, the pacifists have become increasingly silent. On June 21, Germany's government published a long-withheld list of all the equipment it had sent or pledged to Ukraine. Shortly thereafter, it became known that the first German self-propelled howitzers, had arrived in the war zone.

At the same time, Lars Klingbeil, the co-leader of Scholz's Social Democrats, surprised political observers with a bold statement: "Germany must be a leading power." In a keynote address, he emphasized that the world's expectations of Germany were growing significantly.

"After almost 80 years of restraint, Germany today has a new role in the international order," Klingbeil said, explaining that in the decades since the reunification of East and West Germany, the country had earned a reputation as a trustworthy ally.

"We should meet international expectations," he said.

Getting the G7 on track

If Chancellor Scholz, who took office in December, succeeds in getting the G7 heads of state and government on a clear and unified course, it will reflect well on him, too. It helps that Germany, as the host, has a considerable influence on the process and agenda of the summit.

The sanctions against Russia and further long-term help for Ukraine are due to be discussed on the summit's first day. "We will continue to massively support Ukraine — financially, economically, politically, and not least by delivering weapons — and we will do so for as long as Ukraine needs our support," Scholz told Germany's Bundestag parliament in a speech on Wednesday, during which he also proposed a rebuilding plan for the war-torn country.

The chancellor was referring to the Marshall Plan, the US-sponsored road map which promoted the reconstruction of West Germany and other European countries after World War II.

"The extent of the destruction is enormous," Scholz said of Ukraine. Since the beginning of the war, Germany and other countries have pledged billions in support. "But we will need many more billions of euros and dollars for reconstruction, for many years to come. That can only work if we all stand together," he said.

Financial assistance for Ukraine is also up for discussion by the leaders at Schloss Elmau, and Scholz will call for a high-ranking expert conference on Ukraine to be convened. Ukrainian President Volodymyr Zelenskyy will participate in the talks via video link.

Grain deliveries from Ukraine are being held up, with the Russian navy preventing Ukrainian ships from leaving the Black Sea ports. The United Nations is warning of the biggest famine in decades. Many countries in the Global South are also still grappling with the consequences of the coronavirus pandemic.

"If we fail to show solidarity and assist these countries, powers such as Russia and China will take advantage of this," Scholz warned.

In any case, Scholz thinks it's important to pay more attention to the large democracies in Asia, Africa and South America. The understanding of democracy falls short if you concentrate only on the classic West, he said. Joining the G7 leaders on the second day of the summit will be the leaders of Indonesia and India, the current and upcoming presidency holders of the G20 group, Senegal, the holder of the African Union presidency, Argentina, the chair of the Community of Latin American and Caribbean States and South Africa.

They will also be involved in discussions on how to meet climate targets. "We want to work together to combat global warming, achieve industrial transformation towards carbon neutrality and still have good jobs all over the world," said Scholz.