Advertisement
Home / World / France's parliamentary elections, round 2: Why they matter

France's parliamentary elections, round 2: Why they matter 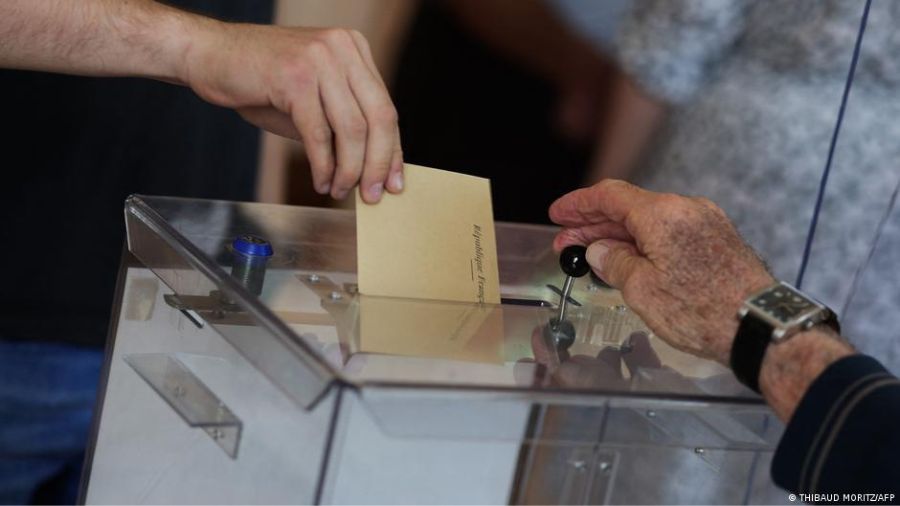 In much of the country, voters will be asked to choose between Macron's centrist alliance and Melenchon's leftist on
Deutsche Welle
Darko Janjevic   |   Published 19.06.22, 09:15 AM

Emmanuel Macron's centrist alliance barely edged out Jean-Luc Melenchon's NUPES in the first round, but Macron's bloc is expected to do better this time. However, retaining a majority is by no means assured.

French voters are gearing up to vote once again on Sunday, after bestowing another mandate on Emmanuel Macron in April and taking part in the first round of the parliamentary elections last weekend.

The principal second round battle will be fought between Macron's centrist Ensemble and Jean-Luc Melenchon's left-wing NUPES.

Last weekend's ballot put Ensemble ahead of NUPES, but the advantage was razor-thin: Ensemble secured 25.75% of the popular vote to NUPES' 25.66% nationwide. Thanks to France's electoral system, however, the outcome will only be decided this Sunday when two top candidates from nearly all 577 constituencies go head-to-head.

What's at stake for Macron?

Most analysts expect Macron's bloc to win the knockout round by luring more moderate voters away from far-left NUPES. Even some left-wingers might turn away from Melenchon, political science researcher Bruno Cautres told DW.

"They think Melenchon is too far-left and are put off by his stance on international alliances and his historical proximity with Russian leader, Vladimir Putin," Cautres said ahead of the initial vote.

Even so, Macron could lose his parliamentary majority and possibly be forced into a coalition government with right-wing parties, dashing his plans for wide-reaching economic reforms.

The 44-year-old president wants to raise retirement age from 62 to 65, cut taxes and further deregulate the labor market. He has also pledged to build more nuclear power plants, and build up an economy that aims to cut greenhouse gas emissions to net zero by 2050.

What's at stake for Melenchon?

Melenchon, a former Trotskyist who repeatedly refers to Macron as the "president of the rich," decried his opponent's plans as "evil" while urging his voters to cast their ballots on Sunday.

"Given this result and the extraordinary opportunity it represents for our personal lives and the future of our common homeland, I call on our people to storm the polls next Sunday to reject, once and for all, the disastrous projects of Mr. Macron's majority," said the 70-year-old.

The far-left NUPES alliance has plans to cut the retirement age to 60, increase the minimum wage, and place caps on food and energy prices. Their program also includes nationalizing the banking and energy sectors, and putting pressure on the European Central Bank to nullify all EU states' debt.

Melenchon hopes to become France's prime minister and lead a government with Macron still in power as president — an arrangement known in France as "cohabitation." Although polls suggest this target is highly unlikely, it is not mathematically impossible.

What's at stake for the EU and the world?

A French government led by Melenchon could shake the foundations of the EU at the time of unprecedented instability for the European bloc. The war in Ukraine, combined with the consequences of the coronavirus pandemic, has left EU politicians scrambling to respond to security fears and escalating economic issues.

The unity between Paris and Berlin is crucial to formulating and implementing joint EU policies. NUPES programs, by their own admission, would cost hundreds of billions of euros per year and are virtually guaranteed to prompt outrage in fiscally conservative Germany. Melenchon has also pledged to reconsider France's membership in NATO, although he has backed away from plans to leave the alliance outright.

On the other hand, Melenchon is seen as a symbol of hope for the European and global left and enjoys popularity among young voters in France. His supporters argue that radical changes are needed to bring the world back from the brink and break the power of financial elites.

The vote is also likely to showcase rising political apathy in France. Voter turnout of below 50% last Sunday was France's worst on record in a parliamentary election first round. Typically, second round turnout is even lower, with some voters no longer moved to participate after their party or candidate of choice is eliminated in the first round.