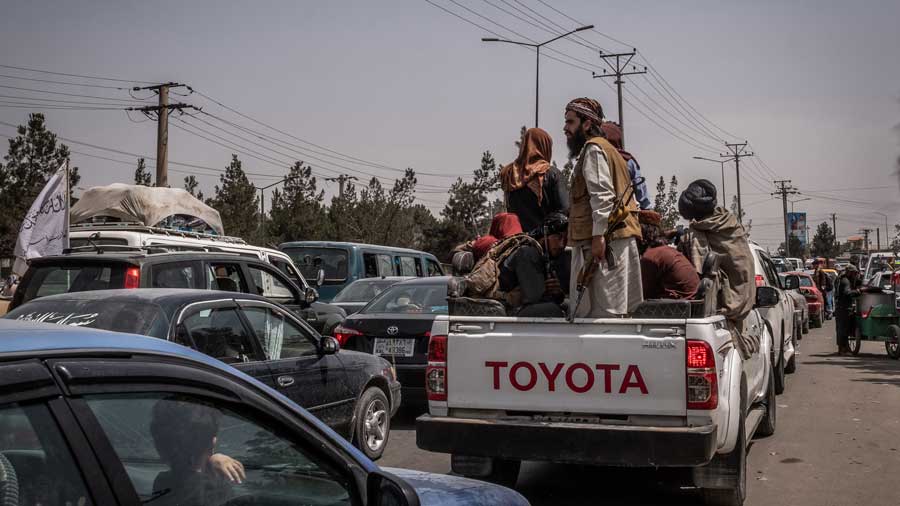 A firefight broke out between unidentified gunmen, Western security forces and Afghan guards at the North Gate of Kabul airport on Monday, Germany's armed forces said, as thousands of Afghans and foreigners thronged the airport, seeking to flee Taliban rule.

One Afghan guard was killed and three others were injured in the battle, which also involved U.S. and German forces, the German military said on Twitter, without specifying whether the dead Afghan was one of the Taliban fighters deployed to guard the airport.

The airport has been a scene of chaos since the Taliban seized the Afghan capital on Aug. 15 as U.S. and international forces try to evacuate citizens and vulnerable Afghans.

On Sunday, Taliban fighters beat back crowds at the airport a day after seven Afghans were killed in a crush at the gates as the deadline for the withdrawal of foreign troops approaches.

Foreign forces in Afghanistan have not sought to extend the Aug. 31 deadline to leave the country, a Taliban official said on Monday, after President Joe Biden said U.S. troops might stay longer to oversee a "hard and painful" evacuation.

The Taliban seized power in Afghanistan just over a week ago as the United States and its allies withdrew troops after a 20-year war aimed at overthrowing the Taliban and hunting down al Qaeda after the 9/11 attacks.

Foreign forces were working towards the end-August deadline agreed with the Taliban to leave the country and had not sought to extend it yet, a senior legal adviser to the Taliban leadership told Reuters on Monday.

Biden, who last week flagged the possibility of troops remaining longer, said on Sunday the security situation in Afghanistan was changing rapidly and remained dangerous.

"Let me be clear, the evacuation of thousands from Kabul is going to be hard and painful" and would have been "no matter when it began", Biden said in a briefing at the White House.

"We have a long way to go and a lot could still go wrong."

Asked by a reporter whether the United States would extend an Aug. 31 deadline for evacuations, Biden replied: "Our hope is we will not have to extend but there are going to be discussions I suspect on how far along we are in the process."

Biden said he had directed the State Department to contact Americans stranded in the country, where Taliban checkpoints are in place.

"We're executing a plan to move groups of these Americans to safety and to safely and effectively move them to the airport compound. For security reasons, I'm not going to go into detail ... but I will say again today what I've said before: Any American who wants to get home will get home."

Afghan allies of the West and vulnerable Afghans such as women activists and journalists would be helped too, he said.

Panicked Afghans have clamoured to board flights out of Kabul, fearing reprisals and a return to a harsh version of Islamic law that the Sunni Muslim group implemented when it was last in power, two decades ago.

The United States on Sunday sought the help of six commercial airlines to transport people after their evacuation from Afghanistan. Biden said people fleeing Afghanistan were being assisted by more than two dozen countries in four continents.

Japan said it will send a military aircraft to Afghanistan on Monday to bring back its citizens. More flights are expected to repatriate not only Japanese citizens but also Afghans working at the Japanese embassy or with Japanese missions, a government spokesperson said.

A United Nations flight transported 120 people from Kabul to Kazakhstan on Sunday, said U.N. spokesman Stephane Dujarric. Passengers included U.N. personnel and members of non-governmental organizations who work with the United Nations in Afghanistan, he said, adding that it was the second such flight in the past week.

Leaders of the Taliban, who have sought to show a more moderate face since capturing Kabul, have begun talks on forming a government.

They face opposition from forces in northern Afghanistan, which said this weekend they had taken three districts close to the Panjshir valley.

Anti-Taliban leader Ahmad Massoud said on Sunday he hoped to hold peaceful talks with the Islamist movement but that his forces in the Panjshir - remnants of army units, special forces and militiamen - were ready to fight.

"We want to make the Taliban realise that the only way forward is through negotiation," he said. "We do not want a war to break out."

The Taliban said hundreds of their fighters were heading towards Panjshir, showing a video on Twitter of a column of captured trucks with the white Taliban flag but still bearing their government markings moving along a highway.

Reuters spoke to eight doctors in public hospitals in several Taliban controlled cities elsewhere in the country who said they had not heard of any violence or received any wounded or bodies of people killed in clashes since Thursday.