What on the surface appeared to be a routine trip, has become a tricky dance of diplomacy in a region increasingly unnerved by military advances by North Korea and China 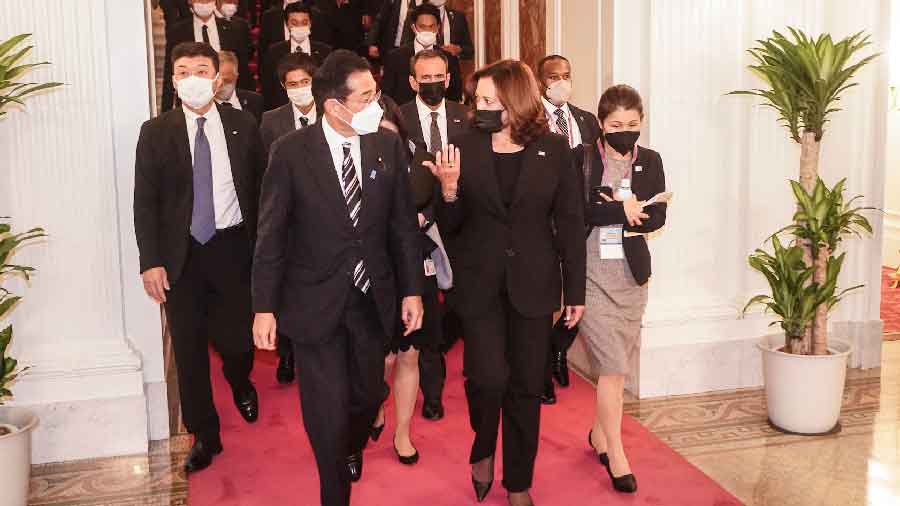 A day after she placed flowers at the funeral altar of Shinzo Abe, the assassinated former Japanese prime minister, Vice President Kamala Harris traded the solemn setting of the state ceremony for the Yokosuka naval base south of Tokyo, where she took aim at China’s aggression toward Taiwan.

“China has challenged freedom of the seas. China has flexed its military and economic might to coerce and intimidate its neighbors,” Harris said Wednesday while speaking to American sailors on board the Howard, a naval destroyer. “And we have witnessed disturbing behavior in the East China Sea and in the South China Sea and, most recently, provocations across the Taiwan Strait.”

What on the surface appeared to be a routine, symbolic trip for the vice president has become a tricky dance of diplomacy in a region increasingly unnerved by military advances by North Korea and China.

Just after Harris’ speech, South Korea reported that the North had launched two ballistic missiles into the waters off its east coast. Almost at the same time, Harris said in an interview with The New York Times that her message for the North’s leader, Kim Jong Un, was that “we believe that his recent activity has been destabilizing and in many ways provocative” and that “we stand with our allies.”

The North’s launches, conducted four days after its first ballistic missile test in nearly four months, came on the eve of a planned trip by Harris to the Demilitarized Zone separating the two Koreas.

Hours before Abe’s funeral, Harris confronted another issue weighing on South Korea: U.S. tax credits for electric vehicles. Meeting with frustrated South Korean representatives, she defended legislation approved by Congress that excludes electric vehicles built outside North America from the credits, according to a senior administration official. The vice president planned to continue the discussion with President Yoon Suk Yeol of South Korea on Thursday, as well as raise concerns about his gender equality policies.

Throughout the first leg of Harris’ trip to a region walking a tightrope on China, she primarily kept the focus on Taiwan, a week and a half after President Joe Biden appeared once again to move beyond a policy of “strategic ambiguity” by saying the United States would defend the island if China invaded.

The question of how far the United States would go to defend Taiwan has only grown more urgent among allies in the region after China responded to Speaker Nancy Pelosi’s visit to the island last month by conducting its most extensive drills ever in the air and waters around Taiwan.

While Harris’ aides denied that Biden’s comments earlier this month on Taiwan had affected their meetings with leaders from Japan, Australia and South Korea, a senior official did say that China’s response to Pelosi’s visit was a focus of their discussions.

“Biden’s most recent statements and his previous ones about Taiwan have kept the China-Taiwan issue at the top of the regional agenda,” said Evan Medeiros, a Georgetown University professor who was senior Asia director at the White House National Security Council in the Obama administration.

“It matters to U.S. allies and policymakers throughout Asia who are asking the key question: What’s the line between deterrence and provocation?” he added. “And no one knows where that line is, and exploring those boundaries is complicated business.”

Harris underlined the administration’s focus on China and Taiwan while addressing the sailors aboard the Howard, accusing Beijing of seizing on Pelosi’s Taiwan visit to conduct an “unprecedented show of military force, a pressure campaign against Taiwan, a series of destabilizing actions.”

She listed examples of growing threats for the gathered sailors, noting Russia’s invasion of Ukraine, North Korea’s test launch and China’s “undermining key elements of the international rules-based order.” When Harris last accused China of aggressive tactics in the South China Sea, Beijing responded by accusing the United States of provoking tensions in the region.

It is not the first time Harris has encountered a maze of challenges in pursuit of bolstering her foreign policy bona fides as the Biden administration faces low approval ratings back home.

Last year, during her first visit to Asia as vice president, Harris faced questions about the historical parallel between the U.S. evacuation of American citizens in 1975 from Saigon, Vietnam, and the scenes of desperate Afghans running behind U.S. military planes as the Taliban took control of Kabul after the withdrawal of U.S. forces.

She visited Emmanuel Macron, the French president, weeks after the United States and Australia kept Paris in the dark over a plan to build nuclear-powered submarines, a deal that France called a “betrayal” of an existing agreement to buy conventional French-made subs.

While visiting Guatemala, she demanded that asylum-seekers “do not come” to the United States as the administration faced increasing criticism over maintaining a Trump-era policy of turning back migrants amid surging illegal crossings at the U.S.-Mexico border.

Harris appeared to confront controversy again this week in Japan. Her attendance at the state funeral came as thousands of protesters took to the streets to oppose the event, calling it a waste of public money and a unilaterally imposed celebration of a divisive leader.

Aaron Connelly, a research fellow at the International Institute for Strategic Studies in Singapore, said the administration’s decision to send Harris to the funeral just eight days after the president attended the funeral for Queen Elizabeth II risked undermining the administration’s stated priority of shoring up alliances in the Indo-Pacific region to counter China.

“This is an interesting moment of comparison where Biden dropped everything to go to Queen Elizabeth’s funeral and kind of sit in the back of the abbey with other countries’ leaders,” Connelly said. “The fact Shinzo Abe only gets the vice president,” he added, “shows America is kind of trapped in this Atlanticist perspective and we can’t really shift our view.”

But that did not mean America’s Asian allies were not eager to address with Harris the military challenges posed by China and North Korea.

Almost immediately after arriving in Tokyo on Monday, Harris called the U.S.’ alliance with Japan, which is pushing to drastically expand its military spending, a “cornerstone” of peace in the region. On Tuesday, after he broke the news that Harris would become the first high-ranking Biden administration official to visit the DMZ, the South Korean prime minister, Han Duck-soo, made clear his own nation’s anxieties over North Korea’s nuclear capabilities.

“It was very rare that some country is actually making explicit how they will use nuclear, you know, nuclear ambitions in such an explicit way,” Han said, referring to a new law adopted in North Korea saying the country will launch a nuclear attack if the United States or South Korea threatens its leader’s hold on power.

“We should really go into real cooperation and work together in making a really effective deterrence to the possible provocations of the North Koreans,” Han added.

But while the two nations recommitted to working to deter the North, one of the signature achievements of Biden’s domestic agenda has become a source of tension.

A senior official traveling with Harris said that South Korean representatives had expressed concerns about Biden’s Inflation Reduction Act, which provides tax credits for U.S. buyers of electric vehicles made in North America.

South Korean leaders have felt “betrayed” by the law, particularly after Biden joined the chair of Hyundai earlier this year in Seoul to celebrate the South Korean company’s investment in a new electric vehicle and battery manufacturing facility in Savannah, Georgia, said Frank Aum, a senior expert on Northeast Asia at the U.S. Institute of Peace.

“That’s one of the issues of tension right now,” Aum said.

Harris told the Times that she also planned to discuss gender equality issues in South Korea, which has the highest gender-wage gap among wealthy countries, and where less than one-fifth of its national lawmakers are women. During his campaign, Yoon proposed eliminating the nation’s Ministry of Gender Equality and Family — an idea he has since stepped back from.

“I strongly believe that you can actually measure the state of a democracy based on the status of women in that democracy,” Harris said. “I do plan on bringing it up with him.”

She said she would raise representation in “all parts of the system, including government.” She will also hold a roundtable discussion with female leaders to explore how to “actually address this issue in a systemic way.”

But before Harris turned her attention to Korea, she sought to affirm the administration’s focus on Beijing.

Rahm Emanuel, the U.S. ambassador to Japan, said the administration’s investments in the semiconductor industry and military assistance to Ukraine had “enhanced the American brand, especially in comparison to China’s failed COVID, housing, technology crackdown and slowing economy.”

Harris in Asia amid nuclear threat