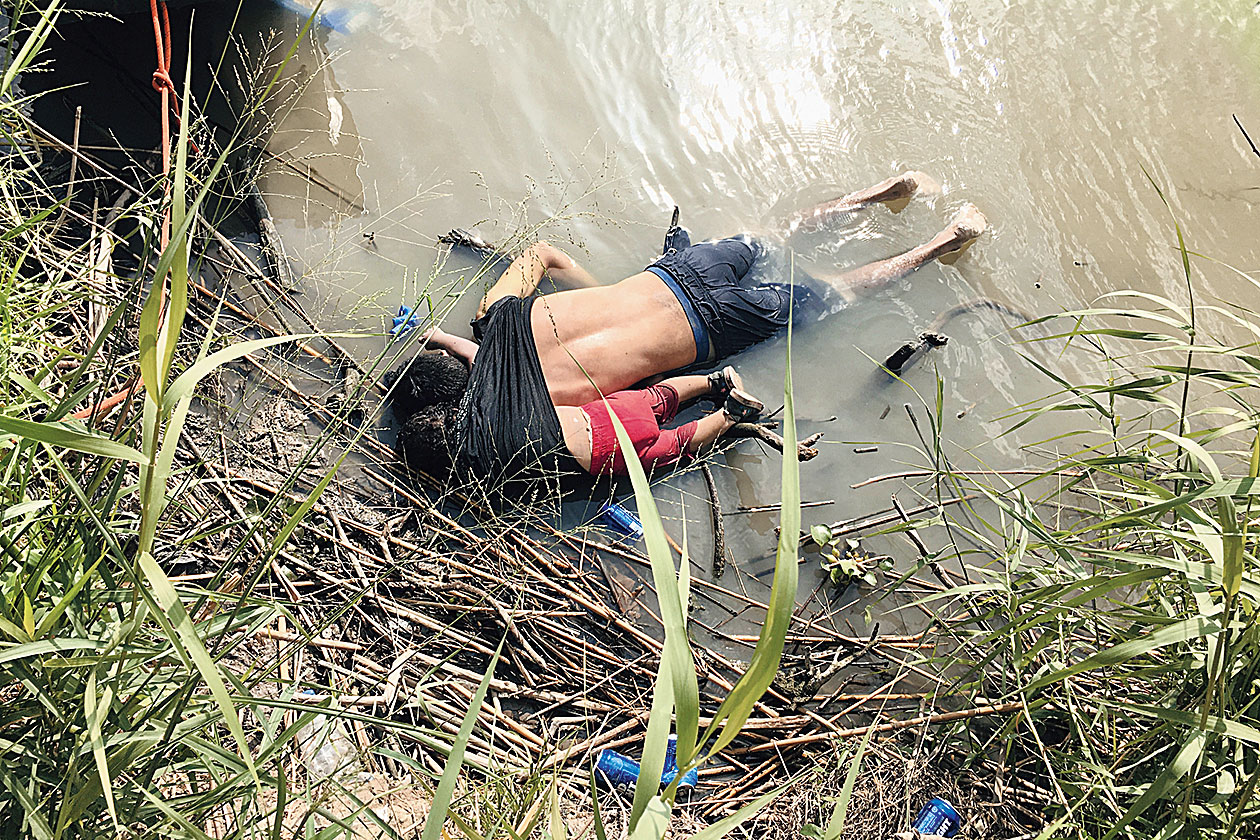 The bodies of Salvadoran migrant Oscar Alberto Martinez Ramirez and his daughter Angie Valeria lie on the bank of the Rio Grande river in Matamoros, Mexico, after they drowned trying to cross the river to Brownsville, Texas.
(AP)
Kirk Semple/New York Times News Service   |     |   Published 29.06.19, 06:42 PM

Rosa Ramirez pleaded with her son, urging him not to leave El Salvador and head north with his wife and young daughter. The risks were simply too high.

He saw no other choice. Their neighbourhood was controlled by a gang that enriched itself through drug-dealing, extortion and violence. But most pressing of all, Ramirez said, they could barely make ends meet on their jobs at fast-food restaurants, and had pinned their hopes on making it to the US.

Last Sunday, after weeks on the road, Ramirez’s son, Oscar Alberto Martinez Ramirez, 25, and his 23-month-old daughter, Angie Valeria, drowned while trying to cross from Mexico into Texas.

Their fate, captured in a searing photograph of father and daughter lying face down in the muddy waters of the Rio Grande, her arm limply wrapped around him, has quickly become a focal point in the debate over the stream of migrants pushing towards the American border — and President Trump’s determination to stop it.

Critics of the President have taken up the case of the Martinez family, with Senator Chuck Schumer calling the President’s policies “a whirlwind of incompetence, leading to pictures like this”.

Trump and his supporters, in turn, have accused Democrats of an inaction that has worsened the crisis, with Senator Mitch McConnell of Kentucky criticizing them as being “uncooperative and uninterested in anything except political posturing”.

But for many residents here in Martinez’s hometown, San Martín, the heated political battle in Washington has barely registered, and Trump’s repeated efforts to block migrants have had little impact on the decision to make the perilous journey.

“He can say what he wants — that he’s going to put up a wall of I-don’t-know-how-many metres,” said Jose Aleman, 48, a partner in a local car washing business. “But they keep going.”

The death of Martinez and his daughter has given an urgent and poignant face to a major driver of migration from Central America and elsewhere: economic duress.

Much attention in recent years has been given to the rampant violence that has compelled so many Salvadorans and residents of neighbouring Guatemala and Honduras to head north.

But perhaps a bigger impetus, officials and residents here say, has been economics, especially poverty and the lack of good jobs.

The Martinez family made it as far as the northern Mexican border city of Matamoros last weekend, where, according to relatives, they hoped to cross into the US and apply for asylum.

Told the bridge was closed, however, they decided to ford the Rio Grande on Sunday afternoon instead.

Martinez went ahead with the couple’s daughter, carrying her on his back, tucked under his T-shirt. His wife, Tania Vanessa Avalos, followed behind, riding on the back of a family friend, she told Mexican officials.

As Martinez, carrying their daughter, approached the opposite bank, he was visibly tiring in the rough water, Avalos told the authorities. Unnerved, she decided to swim back to the Mexican side, but she saw her husband and daughter, close to the American riverbank, sink into the water and get swept away.

“I didn’t want them to go,” Ramirez, Martinez’s mother, said this week in an interview at the small, two-bedroom rowhouse that she shared with her son and his family. “But they didn’t take my advice.”

It remains unclear how the Martinez family intended to argue their case for asylum, or whether they even understood the legal basis for gaining such protection. Martinez’s wife, Avalos, did not respond to requests for an interview.

But Ramirez repeatedly said that her son and his family were not fleeing persecution or the threat of it — requirements for gaining asylum in the US.

They migrated “only because of the economic situation,” she said. “Lamentably, the salaries here are very little and they aren’t enough,” she added, speaking softly.

Trump has railed against what he calls rampant asylum fraud, and he has imposed restrictions on the system in an effort to curb abuse — measures that human rights and migrants’ advocates say have imperiled the lives of asylum-seekers who have legitimate claims.

Residents and officials here say a gang dominates the neighbourhood, Altavista. But Ramirez and another relative said the immediate family had not been directly imperiled by the gang.

Instead, like so many others here and throughout the working class of El Salvador, the family was struggling to get by, living on the edge of poverty. “There isn’t opportunity, there’s no work,” said Víctor Manuel Rivera, the mayor of San Martin. He estimated that about 50 per cent of the municipality’s residents with a high school degree are unemployed.

“Every day I hear it: ‘I’m leaving for the United States,’” he said.

People here talk about “la situación” — the situation — shorthand for the economic struggle many face. The counterpoint is often simple: “The American dream.”

“It hasn’t occurred to me to leave for there,” said Salvador Humberto Andrade Torres, 59, a neighbour of the Martínez family, referring to the US. “But it occurs to a lot of people.”

Officials described the neighbourhood — indeed, the entire municipality of San Martin — as a de facto “bedroom community”, with many residents commuting on average about two hours each way to work in the capital, San Salvador.

Martinez and Avalos, however, worked relatively close to their home, family members said — she in a Chinese fast-food restaurant at a middle-class mall, and he at various branches of the pizza chain Papa John’s.

But the couple, even though they were sharing household expenses with Ramirez and her partner, were having a hard time on their salaries of about $300 a month. Last autumn, they started talking about migrating to the US.

Most of those who migrate are young, as has been the case for generations. But in recent years, the municipality has seen a sharp increase in the number of families migrating, too, part of a wave of family migration from Central America towards the US.

Ramirez said she spoke with her son from time to time as the family made its northward trek, but he did not reveal many details.

The farewell had been subdued. The family gathered for a simple, Sunday meal one afternoon last spring. Ramirez prepared beef stew — “they love that”, she said.

Several days later, as she headed to her night shift at the garment factory where she works, Ramirez said one last goodbye to her son and his family.

When she returned in the morning, they were gone.

Ramirez remembered her son as a loyal, doting father and “a responsible, friendly, respectful son”.

After the bodies were discovered on Monday, Ramirez found herself scrolling through the photos of her son and granddaughter on her phone.

Her daughter eventually erased them to spare her the pain.

“I would feel bad when I looked at them,” Ramirez said.