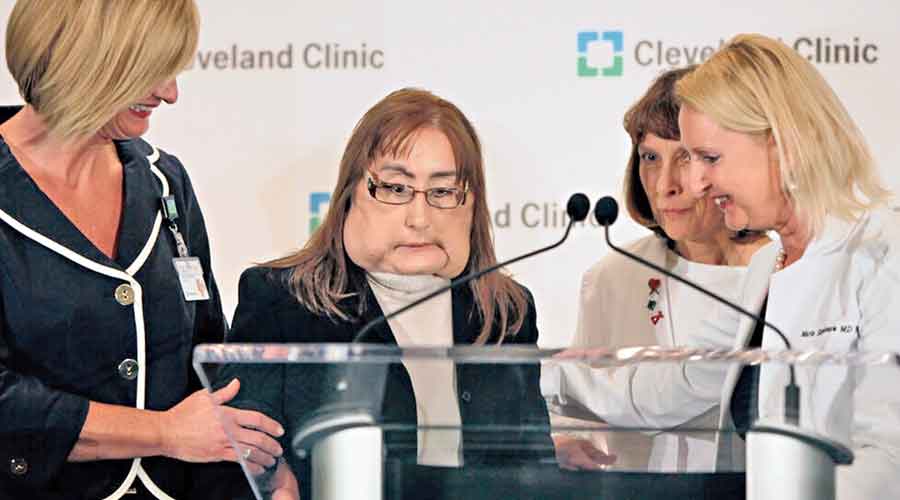 Connie Culp, the first patient in the US to receive a face transplant, died on Wednesday at the Cleveland Clinic, which had performed her procedure in 2008. She was 57.

She died of complications from an infection that was unrelated to her transplant, a spokesperson for the hospital said. The clinic confirmed Culp’s death on Twitter.

Culp was the longest-living face transplant patient in the world, the spokesperson said.

“She was a great pioneer and her decision to undergo a sometimes-daunting procedure is an enduring gift for all of humanity,” said Dr Frank Papay, chairman of the Cleveland Clinic’s Dermatology and Plastic Surgery Institute.

Papay was part of the surgical team that performed Culp’s 23-hour operation in 2008, which replaced her damaged face with that of a recently deceased woman.

It was the most extensive and complicated face transplant at the time. Three face transplants had been done before Culp’s— two in France and one in China.

A Cleveland Clinic ethics committee had approved such a procedure only in 2004, the first such committee to do so. Dr Eric Kodish, the then chairman of the clinic’s bioethics department, told The New York Times after the transplant that Culp had undergone psychological testing before surgery.

She was asked whether it was she or a family member who wanted the transplant, and about how she felt about living with the face from a dead person, Dr Kodish said.

Culp was shot by her husband, Thomas Culp, in 2004, damaging most of her face and leaving her unable to breathe or eat on her own. Her husband, with whom she had a common-law marriage, according to The Plain Dealer, was sentenced to seven years in prison for aggravated attempted murder and released in 2011.

After shooting his wife, Thomas Culp turned the shotgun on himself but only lost a few teeth and some of the vision in his left eye. He still looked the same, his wife told The Plain Dealer.

She said she had forgiven her husband. “I still love my husband,” she told Good Morning America in 2009. “I forgave him the day he did it. I have to.”

Around 40 such surgeries have been done worldwide since Culp’s, said Dr Thomas Romo III, director of facial plastic and reconstructive surgery at Lenox Hill Hospital and Manhattan Eye, Ear and Throat Hospital.

Her procedure was immediately successful and Culp’s body did not reject the transplant, though she needed to take anti-rejection drugs for the rest of her life because her body could have rejected the transplant at any time. The drugs suppress a patient’s immune system to prevent it from rejecting the transplant but also make the person more susceptible to infections.

Charla Nash, who received a full face transplant in 2011 after being mauled by her friend’s pet chimpanzee in Stamford, Connecticut, was hospitalised in 2016 after she participated in a trial to determine if transplant patients could be weaned off the drugs.

Face transplants are more than just cosmetic improvements for patients, Dr Romo said. After successful transplants, most patients are able to speak, eat and otherwise live a more normal life.

If not for the surgery, Culp would not have been able to smile or talk, Dr Romo said, adding that face transplants can have positive psychological effects for patients.

Culp is “a milestone in medical history, and will be forever,” he said.

She was chosen for the then-experimental surgery because of her optimism and willingness to follow medical orders, according to a 2010 profile in The Plain Dealer.

At a news conference unveiling her new face in 2009, Culp asked others to be kind to people with facial disfigurements. “Don’t judge people who don’t look the same as you do,” she said. “Because you never know. One day it might be all taken away.”