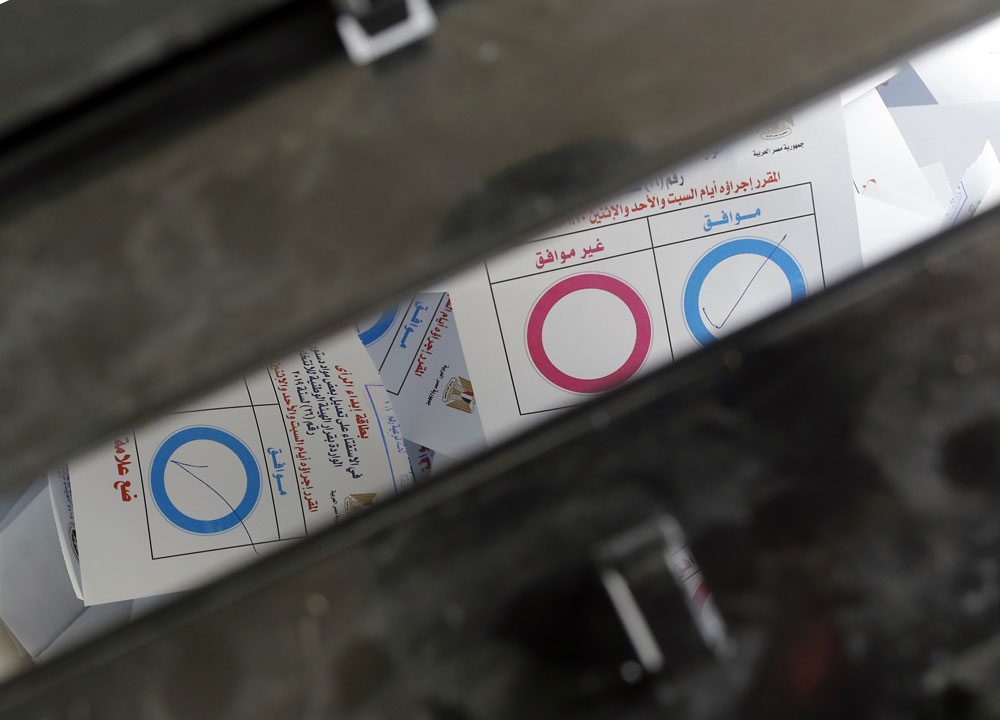 El-Sissi led the military overthrow of an elected but divisive Islamist president amid mass protests against his rule in 2013 and has since presided over an unprecedented crackdown on dissent. Thousands of people, including many pro-democracy activists, have been arrested by authorities. Freedoms won in 2011, when mass protests ended President Hosni Mubarak's nearly three-decade rule, have been rolled back.

Lasheen Ibrahim, the head of Egypt's National Election Authority, told a news conference the amendments to the 2014 constitution were approved with 88.83% voting in favor, with a turnout of 44.33%. The nationwide referendum took place over three days, from Saturday through Monday to maximize turnout. Egypt has some 61 million eligible voters.

In his first public comments on the amendments, el-Sissi thanked the Egyptian people for voting.

'Wonderful scene done by Egyptians who took part in the referendum... will be written down in our nation's historical record,' he tweeted minutes after Ibrahim announced the results.

Pro-government media, business people and lawmakers had pushed for a 'Yes' vote and a high turnout, with many offering free rides and food handouts to voters, while authorities threatened to fine anyone boycotting the three-day referendum.

Opposition parties had urged a 'no' vote, but they have little power in parliament, which is packed with el-Sissi supporters and overwhelmingly approved the amendments earlier this month. The local media is also dominated by pro-government commentators, and the authorities have blocked hundreds of websites, including many operated by independent media and rights groups.

Two international advocacy groups — Human Rights Watch and the International Commission of Jurists — had urged the Egyptian government to withdraw the amendments, saying they placed the country on a path to more autocratic rule.

Hassan Nafaa, a political science professor at Cairo University, said the results were expected. 'There will be dangerous repercussion from the ruling regime as we will see more repression and restrictive policies,' he said.

Generally, the amendments extend a president's term in office from four to six years and allow for a maximum of two terms. But they also include a special article specific to el-Sissi that extends his current second four-year term to six years and allows him to run for another six-year term in 2024 — potentially extending his rule until 2030.

The changes also allow the president to appoint top judges and include language declaring the military the 'guardian and protector' of the Egyptian state, democracy and the constitution, while granting military courts wider jurisdiction in trying civilians.

El-Sissi was elected president in 2014 and re-elected last year after all potentially serious challengers were jailed or pressured to exit the race.

Parliament overwhelmingly approved the amendments last week, with only 22 no votes and one abstention from 554 lawmakers in attendance. The national electoral commission announced the following day that voting would begin Saturday.

Since early April, the Egyptian capital had been awash with large posters and banners encouraging people to vote in favor of the changes. Most of the posters were apparently funded by pro-government parties, businessmen and lawmakers.

In Cairo's central Tahrir Square, where mass protests became the symbol of the 2011 anti-Mubarak uprising and of hopes for democratic change in Egypt, the posters urged people to vote in the referendum.

'Take part, say ... 'yes' for the constitutional amendments,' said one banner near the offices of the pro-government Nation's Future Party. Most of the posters were apparently funded by pro-government parties, businessmen and lawmakers.

During the referendum, business people and lawmakers loyal to el-Sissi offered incentives to voters. They provided buses to transport people free of charge to a polling center. Also some voters were being handed bags of food staples — like oil, rice and sugar — after they cast their ballots.

Trucks with loudspeakers drove around central Cairo through the three-day referendum, playing patriotic songs and urging people to vote.