The ambitious new metropolis is rising from what was UAE's Expo City site master-planned to sustain a population of about one million and create 500,000 new jobs; will host COP28, the next global climate conference 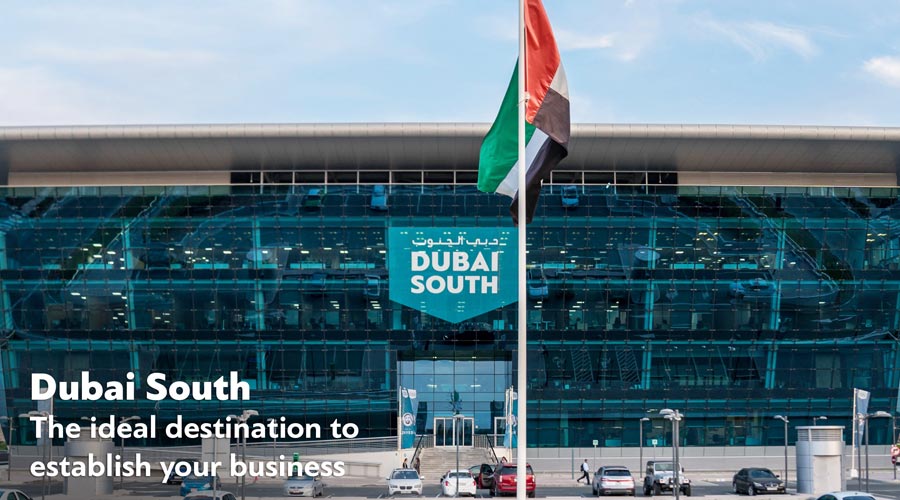 Dubai South will be home to the world’s largest airport, the Al Maktoum International Airport, when it is completed, another 'biggest' for the emirate
Twitter / @Dubai_South
K P Nayar   |   Published 07.11.22, 03:57 PM

The world’s newest city opened recently at the repurposed site of Expo 2020 Dubai, the first World Exposition to have been held in the Middle East, North Africa and South Asia (MEASA) region. The highly successful show ran for six months until March this year.

Located between Dubai and Abu Dhabi, Expo City Dubai is the size of 610 football fields as of now. But when Dubai’s 2040 Urban Master Plan is implemented in phases, the new city will become part of Dubai South, which is projected to be almost twice the size of Hong Kong Island when it is fully built. It is being master-planned to sustain a population of about one million and create 500,000 new jobs in an era when governments elsewhere in the world worry about job losses and are at a dead end in creating fresh employment opportunities.

The new city will host the next Conference of the Parties (COP28), the Global Climate Conference in 2023, it was announced on Monday. Marking the one-year countdown to COP28, Expo City Dubai is kicking off a diverse and engaging calendar of sustainability-themed events, featuring thought-provoking youth discussions, performances, exhibitions and more.

Indians constitute the biggest expatriate population in the UAE numbering 3.5 million. It is reasonable to expect that a big share of the new jobs to be created in Dubai South will go to potential employees from South Asia. The Narendra Modi government has made it a mission to send back to the Gulf as many people as possible who lost their jobs during the Covid-19 disruptions. It has achieved reasonable success in the UAE labour market in this matter.

Dubai is famous for creating the “world’s biggest”. It already has the world’s tallest skyscraper, the Burj Khalifa. Expo 2020 Dubai was the biggest in history since the first World Exposition was held in London’s iconic Crystal Palace 171 years ago. The Dubai Expo saw the participation of 192 countries, only one short of the total membership of the United Nations. It attracted 24.1 million visits from all over the world, braving the odds of the global pandemic and consequent travel as well as logistical disruptions which came in the wake of COVID-19 – which forced the organisers to postpone the event by a year.

Dubai South will be home to the world’s largest airport, the Al Maktoum International Airport, when it is completed, another “biggest” for the emirate. The airport gradually began operating cargo flights in 2010 and passenger flights three years later. When complete, the airport will have five runways capable of transporting 220 million passengers and 16 million tons of cargo annually.

Expo City Dubai, which opened on October 1, is integral to the success of the emirate’s Urban Master Plan. Reflecting the vision of the urban planners involved, they have christened Dubai South as “The City of You: to become a city of happy, creative and empowered people, to build a smart and sustainable city and create an inclusive and cohesive society.”

Converting the Expo space into Expo City Dubai was very much the plan of Dubai’s leadership all along. But they were further encouraged in the final week of the World Exposition by an unusual request to the zestful woman minister of the United Arab Emirates in charge of Expo 2020 Dubai, Reem bint Ebrahim Al Hashimy. The request came from a multinational group of invitees to one of the concluding events: find a way to extend the duration of Expo 2020 Dubai beyond its six months.

The Expo closed when it was at the pinnacle of its popularity. This was reflected in a succinct comment by Mohammed Jalal Al Rayssi, Director-General of the Emirates News Agency, WAM, on the concluding night of Expo: “Despite humanity’s passing through the most difficult and challenging time due to the COVID-19 pandemic and its negative effects on the economies of the world…an indicator of the success of Expo was the large number of visitors who came from outside the host country.” The half year-long event was a welcome getaway for people all over the world after the lockdowns and prolonged pains from the pandemic.

Al Hashimy responded to pleas that extending the Expo beyond six months was not in the UAE’s hands. Like the United Nations on international political and other matters, such as global health, everything related to World Expos are the responsibility of the Paris-based Bureau International des Expositions (BIE), an inter-governmental organisation with 170 member countries. Two-thirds of member countries would have had to vote in a specially convened BIE General Assembly to approve any such extension. The UAE Minister said even if such a proposal was mooted at that stage, there wasn’t enough time to secure such a two-thirds approval by governments before the Expo closed.

Expo City Dubai is a town with a difference. Hence its opening has been smooth and painless. Most new cities in the world, of late, have been built to satisfy the vanity of their rulers or are vainglorious monstrosities which their residents simply must put up with: Nur-Sultan in Kazakhstan, Abuja in Nigeria, Naypyidaw in Myanmar are examples. But Dubai’s new city has been built keeping in mind the guiding idea of the World Exposition it hosted, namely, “Connecting Minds, Creating the Future."

Sustainability is embedded throughout the city, from its distinctive architecture and its green buildings to the demands of 21st century smart urban planning. It has shown that the UAE will walk the talk in its proactive role in fighting climate change: the 28th session of the Conference of the Parties (COP 28) will be held in the UAE in 2023.

Expo City Dubai is already 5G-enabled and its technology is state-of-the-art, with artificial intelligence providing for interaction between humans on the one hand and robots and computers on the other. It is expected that many of the new city’s tenants will be highly advanced technology companies. It is custom built so that 90 to 95 percent of the daily errands of residents can be undertaken in 15 minutes. A short walk or a bicycle ride from their residences is all that is needed. Hence the eponym “15-minute city”. For residents and visitors, it will have regular entertainment drawn from all over the world at its custom-built, multiple venues already built for the World Exposition.

India’s institutional presence in Expo City Dubai will steadily increase as Dubai South continues to be built. A four-floor Indian Pavilion, which was a huge draw during the entire six months of the World Exposition, will reopen as a permanent exhibition on India, the only such display of the country’s growing strengths anywhere in the world. A state-of-the-art music studio by A. R. Rahman built for Expo 2020 lives on and seeks to attract musical and artistic talent to Dubai from all over the world. Preparatory to Dubai Expo, Rahman created the Firdaus Orchestra, an ensemble of 50 to 60 female musicians from across the Arab world. Firdaus means “paradise” in Arabic.