The move is almost certain to face a court challenge 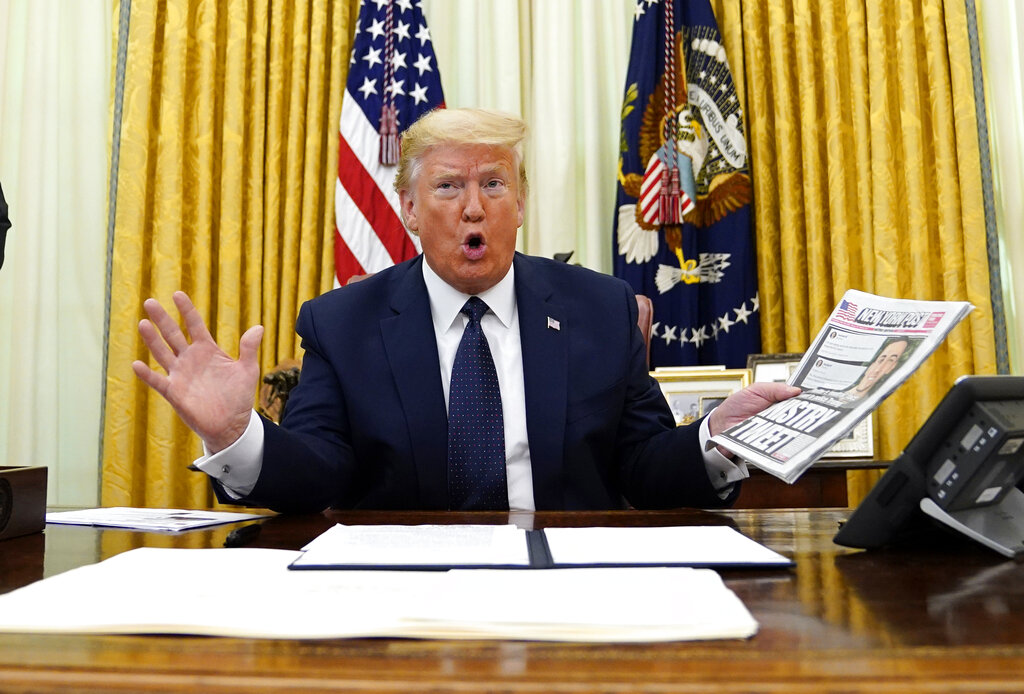 The Trump administration is preparing an executive order intended to curtail the legal protections that shield social media companies from liability for what gets posted on their platforms, two senior administration officials said early on Thursday.

Such an order, which officials said was still being drafted and was subject to change, would make it easier for federal regulators to argue that companies like Facebook, Google, YouTube and Twitter are suppressing free speech when they move to suspend users or delete posts, among other examples.

The move is almost certain to face a court challenge and is the latest salvo by President Trump in his repeated threats to crack down on online platforms. Twitter this week attached fact-checking notices to two of the President’s tweets after he made false claims about voter fraud, and Trump and his supporters have long accused social media companies of silencing conservative voices.

Under Section 230 of the Communications Decency Act, online companies have broad immunity from liability for content created by their users.

But the draft of the executive order, which refers to what it calls “selective censoring,” would allow the commerce department to try to refocus how broadly Section 230 is applied, and to let the Federal Trade Commission bulk up a tool for reporting online bias.

It would also provide limitations on how federal dollars can be spent to advertise on social media platforms.

Some of the ideas in the executive order date to a “social media summit” held last July at the White House, officials said.

Although the law does not provide social media companies blanket protection — for instance, the companies must still comply with copyright law and remove pirated materials posted by users — it does shield them from some responsibility for their users’ posts.

Along with the First Amendment, Section 230 has helped social media companies flourish. They can set their own lax or strict rules for content on their platforms, and they can moderate as they see fit. Defenders of the law, including technology companies, have argued that any move to repeal or alter it would cripple online discussion.

But as conservatives have claimed that social media companies are biased against them and overmoderate their political views, Republican lawmakers have increasingly pushed to modify the statute.

Senators Marco Rubio of Florida and Josh Hawley of Missouri also chimed in this week after Twitter applied its new fact-checking standard to the president. Both lawmakers have been critics of the protections that technology companies enjoy under Section 230, and they renewed their calls to alter it.

The President has long favoured Twitter as a means to reach his supporters, posting personal attacks and previewing policy. This week, Trump repeatedly spread a debunked conspiracy theory about the MSNBC host Joe Scarborough and the death of a woman who worked for him in his congressional office years ago. The woman’s widower has pleaded with Trump to stop.

The President ignored the widower’s request and denounced Twitter, claiming in a tweet that the social media company was trying to tamper with the November presidential election.

On Wednesday, he continued to criticise the company, accusing it of stifling conservative views. “We will strongly regulate, or close them down, before we can ever allow this to happen,” Trump tweeted.

But Mark Zuckerberg, the company’s chief executive, appeared to be pre-emptively trying to soften any blowback from the White House. In a taped television interview scheduled for Thursday morning with Fox, he cast aspersions on Twitter’s willingness to fact check Trump on its platform in real time.

“I just believe strongly that Facebook shouldn’t be the arbiter of truth of everything that people say online,” Zuckerberg said.

“Private companies probably shouldn’t be, especially these platform companies, shouldn’t be in the position of doing that.” Courts have often ruled in favour of technology companies, upholding their immunity.