President releases 4-minute video, admits he “wasn’t feeling so well” but said he felt “much better now” and expected to return to work shortly 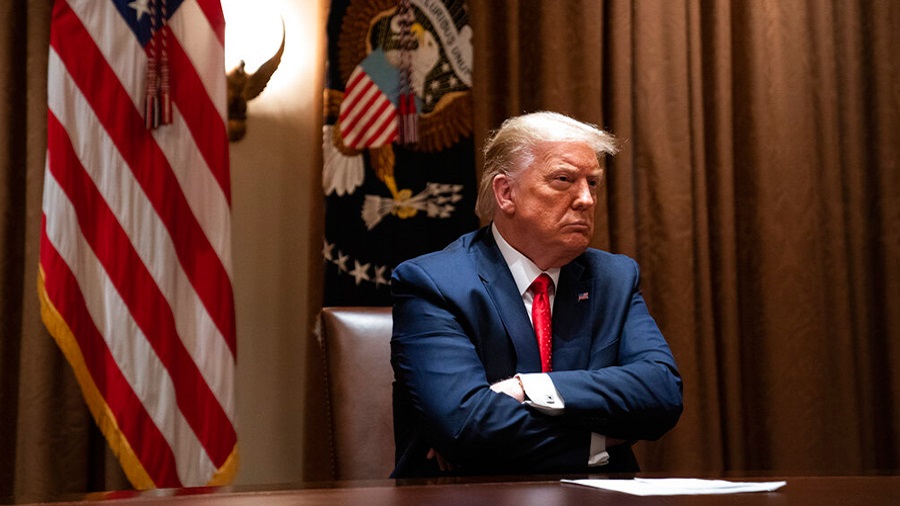 The White House offered a barrage of conflicting messages and contradictory accounts about President Donald Trump’s health on Saturday as he remained hospitalised with the coronavirus for a second night and the outbreak spread to a wider swath of his aides and allies.

Just minutes after the president’s doctors painted a rosy picture of his condition on television, Mark Meadows, the White House chief of staff, gave reporters outside Walter Reed National Military Medical Center a far more sober assessment off camera, calling Trump’s vital signs worrisome and warning that the next two days would be pivotal to the outcome of the illness.

“The president’s vitals over the last 24 hours were very concerning, and the next 48 hours will be critical in terms of his care,” Meadows told the reporters, asking not to be identified by name. “We’re still not on a clear path to a full recovery.”

In keeping with the ground rules he had set, Meadows’ remarks were attributed, in a pool report sent to White House journalists, to a person familiar with the president’s health. But a video posted online captured Meadows approaching the pool reporters outside Walter Reed after the doctors’ televised briefing and asking to speak off the record, making it clear who the unnamed source was.

The comments infuriated the president, according to people close to the situation, and he intervened directly to counter the perception that he was sicker than the White House had admitted. Within hours, he posted a message on Twitter saying, “I am feeling well!” and called his friend and personal lawyer Rudy Giuliani to have him convey a message to the outside world. “I’m going to beat this,” Trump told him.

By evening, the president released a four-minute video meant to reassure the nation, showing him sitting at a conference table at the hospital and wearing a suit jacket but no tie. He looked wan and sounded less energetic than usual in a rambling message that included campaign talk and boasts about his record.

He acknowledged that he “wasn’t feeling so well” but said that he felt “much better now” and that he expected to return to work shortly. “I think I’ll be back soon, and I look forward to finishing up the campaign the way we started,” he said, although he acknowledged, like Meadows, that the next few days would be the real test.

At one point, he offered a muddled explanation for his behavior. It was not entirely clear whether he was referring to his decision to go to the hospital or to keep campaigning in recent months despite the pandemic. “I had no choice,” he said. “I just didn’t want to stay in the White House.” He added: “I can’t be locked up in a room upstairs and totally safe and just say, hey, whatever happens happens. I can’t do that. We have to confront problems.”

The mixed messages only exacerbated the uncertainties surrounding the president’s situation. During their televised briefing, the doctors refused to provide important details and gave timelines that conflicted with earlier White House accounts, leaving the impression that the president was sick and had begun treatment earlier than officially reported. The White House physician later released a statement insisting he and his colleagues had misspoken.

The inconsistencies and confusion may presage an unsettling period for the president and the country. As the doctors indicated, it may be a week to 10 days before the course of Trump’s illness becomes clear, leaving America, as well as its allies and adversaries, guessing about the leadership in the world’s only superpower in the final days of a momentous election campaign.

White House officials sought to project as much of a business-as-usual image as possible, insisting that the president could govern from his hospital bed and that there was no need to transfer power to Vice President Mike Pence. Even as doctors hovered over Trump, his staff Friday night and Saturday issued a report on his buy-American drive, announced some minor appointments and released a proclamation on Fire Prevention Week.

But in reality, Trump has had difficult and even scary moments since being diagnosed with the virus that has killed more than 208,000 in the United States so far. Two people close to the White House said in separate interviews with The New York Times that the president had trouble breathing Friday and that his oxygen level had dropped, prompting his doctors to give him supplemental oxygen while he was at the White House and to transfer him to Walter Reed where he could be monitored with better equipment and treated more rapidly in case of trouble.

Oxygen or no oxygen

During the televised briefing Saturday, Dr. Sean Conley, the White House physician, said the president was not currently receiving supplemental oxygen Saturday but repeatedly declined to say definitively whether he had ever been on oxygen. “None at this moment, and yesterday with the team, while we were all here, he was not on oxygen,” he said, seeming to suggest that there was a period Friday at the White House when he was.

Conley likewise appeared to indicate that the president had first been diagnosed with the virus Wednesday rather than late Thursday night before Trump disclosed the test on Twitter early Friday morning. While describing what he said was the president’s progress, he said Trump was “just 72 hours into the diagnosis now,” which would mean midday Wednesday.

Dr. Brian Garibaldi, another physician treating the president, also said that Trump had received an experimental antibody therapy “about 48 hours ago,” which would have been midday Thursday — before the confirmation test Conley said had come back positive that evening and a full day before the White House disclosed the treatment Friday.

Just two hours later, the White House issued a written statement by Conley trying to clarify. “This morning, while summarizing the president’s health, I incorrectly used the term ‘72 hours’ instead of ‘Day 3’ and ‘48 hours’ instead of ‘Day 2’ with regards to his diagnosis and the administration of the polyclonal antibody therapy,” Conley said. Trump, he said, was “first diagnosed” with the virus Thursday evening and given the antibody combination Friday.

The confusion came from a briefing where Conley and his team offered a relentlessly positive assessment of Trump’s condition. The doctors said Trump had been free of fever for 24 hours and had blood pressure and heart rates that were normal for him.

“This morning the president is doing very well,” Conley said. “At this time, the team and I are extremely happy with the progress the president has made.”

Dr. Sean Dooley, another physician on the team, said Trump was feeling optimistic. “He’s in exceptionally good spirits,” Dooley said. He added that the president told his doctors, “I feel like I could walk out of here today.”

Trump, bored at the hospital and talking to a number of relatives and advisers by phone, was said by three administration officials and people close to him to indeed be in better shape, which added to the frustration among advisers that Conley and Meadows had created such confusion.

At Walter Reed, doctors put Trump on remdesivir, an antiviral drug that has hastened the recovery of some coronavirus patients, and gave him a second dose Saturday. In another statement, issued after 9 p.m., Conley said Trump “remains fever-free and off supplemental oxygen” with a saturation level of 96% to 98%. “While not yet out of the woods, the team remains cautiously optimistic,” he said.

The outbreak infected a third Republican senator Saturday as Ron Johnson of Wisconsin reported testing positive as did former Gov. Chris Christie of New Jersey, who helped prepare Trump for his campaign debate Tuesday. Nicholas Luna, the director of Oval Office operations, also tested positive, an administration official said Saturday night. In the course of barely 48 hours, the president, his wife, his campaign manager, his party chairwoman, his senior adviser, his assistant, his former counselor, his debate coach and three Republican senators all tested positive for the virus, along with at least three White House reporters.

The White House medical unit was investigating Trump’s announcement of his nomination of Judge Amy Coney Barrett to the Supreme Court last weekend as a likely source of the virus’s spread. More than a half-dozen people who attended the event Sept. 26 or were with the president on Air Force One flying to a campaign rally in Pennsylvania later in the evening have now tested positive.

Two of the three senators who have now tested positive for the virus, Mike Lee of Utah and Thom Tillis of North Carolina, were at the Barrett announcement and serve on the Senate Judiciary Committee that will consider her nomination, further complicating a confirmation drive that was already testing speed limits and a razor-thin majority to get done before the election, as Trump has insisted. Johnson, the third senator now infected, was not at the event because he was quarantining from a previous exposure to someone with the virus. He emerged from 14 days of quarantine after testing negative and returned to Washington on Tuesday, his office said, but attended lunch with other Senate Republicans that put him in the same room with Lee and Tillis. He was tested again Friday, and it came back positive.