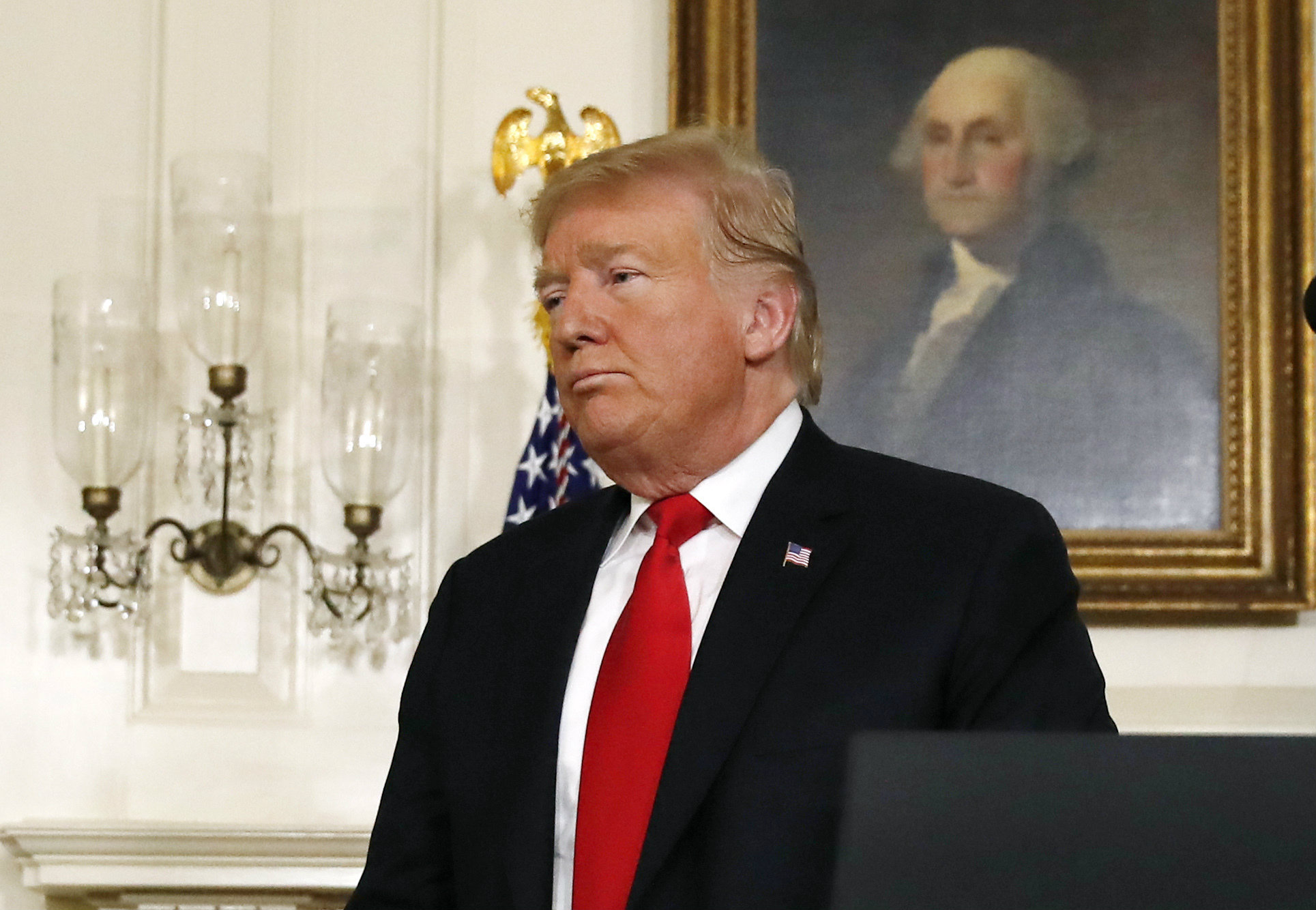 Donald Trump leaves the podium after speaking about the partial government shutdown, immigration and border security in the Diplomatic Reception Room of the White House, in Washington, on Saturday.
AP
AP   |   Washington   |   Published 22.01.19, 05:59 AM

Senate Republicans have released a measure designed around President Donald Trump's proposal for breaking a budget impasse, its centerpiece his demand for $5.7 billion to build a southern border wall all but guaranteeing Democratic opposition and no foreseeable end to a partial government shutdown.

As the shutdown dragged through its fifth week, another missed paycheck loomed for hundreds of thousands of workers.

Voting in Congress was not expected to unfold until later in the week. Even then it seemed doubtful that the 1,300-page measure, dubbed 'End The Shutdown And Secure The Border Act,' had any chance of passing swiftly.

Senate Republicans hold a 53-47 majority but would need Democrats to reach the usual 60-vote threshold for bills to advance. Not a single Democrat publicly expressed support for Trump's proposal since he announced it over the week.

Details of the measure released late on Monday highlight the trade-off of border wall funding for temporary protection from deportation for some immigrants. The Republican package would re-open the shuttered parts of government and boost some spending. To try to draw more bipartisan support, it adds $12.7 billion in supplemental funding for regions hit by hurricanes, wildfires and other natural disasters.

'Nothing has changed with the latest Republican offer,' said Schumer spokesperson Justin Goodman. 'President Trump and Senate Republicans are still saying: 'Support my plan or the government stays shut.' That isn't a compromise or a negotiation — it's simply more hostage taking.'

While the House and Senate are scheduled to be back in session on Tuesday, no votes have been scheduled so far on Trump's plan. And senators, who will be given 24-hour notice ahead of voting, have yet to be recalled to Washington.

McConnell spokesperson David Popp said on Monday that the GOP leader 'will move' to vote on consideration of the President's proposal 'this week'.

Trump, who on Sunday lashed out at House Speaker Nancy Pelosi, accusing her of acting 'irrationally', continued to single her out on Twitter.

'If Nancy Pelosi thinks that Walls are 'immoral,' why isn't she requesting that we take down all of the existing Walls between the U.S. and Mexico,' he wrote on Monday. 'Let millions of unchecked 'strangers' just flow into the U.S.'

House Democrats this week are pushing ahead with voting on their own legislation to re-open the government and add $1 billion for border security —including 75 more immigration judges and infrastructure improvements — but no funding for the wall.

Trump later tweeted: 'Democrats are kidding themselves (they don't really believe it!) if they say you can stop Crime, Drugs, Human Trafficking and Caravans without a Wall or Steel Barrier. Stop playing games and give America the Security it deserves. A Humanitarian Crisis!'

Meanwhile, the impact of the shutdown — the longest ever — continued to ripple across the nation as it stretched into its 32nd day on Tuesday.

The Transportation Security Administration said the percentage of its airport screeners missing work hit 10 percent on Sunday — up from 3.1 percent on the comparable on Sunday a year ago.

The screeners, who have been working without pay, have been citing financial hardship as the reason they can't report to work. Even so, the agency said it screened 1.78 million passengers on Sunday with only 6.9 per cent having to wait 15 minutes or longer to get through security.

The shutdown had also threatened to disrupt plans for an annual Martin Luther King Jr. Day service at Atlanta's Ebenezer Baptist Church, where the civil rights leader was co-pastor with his father from 1960 until his assassination in 1968. The site is run by the National Park Service and had been closed. But a grant from Delta Air Lines is keeping the church and associated sites, including the home where King was born, open through February 3.

Trump on Saturday offered to extend temporary protections for young immigrants brought to the country illegally as children and those fleeing disaster zones for three years in exchange for $5.7 billion for his border wall. Democrats said the proposal for a three-year extension didn't go nearly far enough, and that Trump was using as leverage programs that he had targeted. Meanwhile, some on the right, including conservative commentator Ann Coulter, accused Trump of offering 'amnesty'.

'No, Amnesty is not a part of my offer,' Trump tweeted on Sunday, in response. He noted that he'd offered temporary protections for the immigrants in question, but added: 'Amnesty will be used only on a much bigger deal, whether on immigration or something else.'

That statement led some to suggest that Trump might be open to including a potential pathway to citizenship for the young 'Dreamer' immigrants in a future proposal to end the standoff.

'Well, of course,' Pence said. 'The legislative process is a negotiation.'