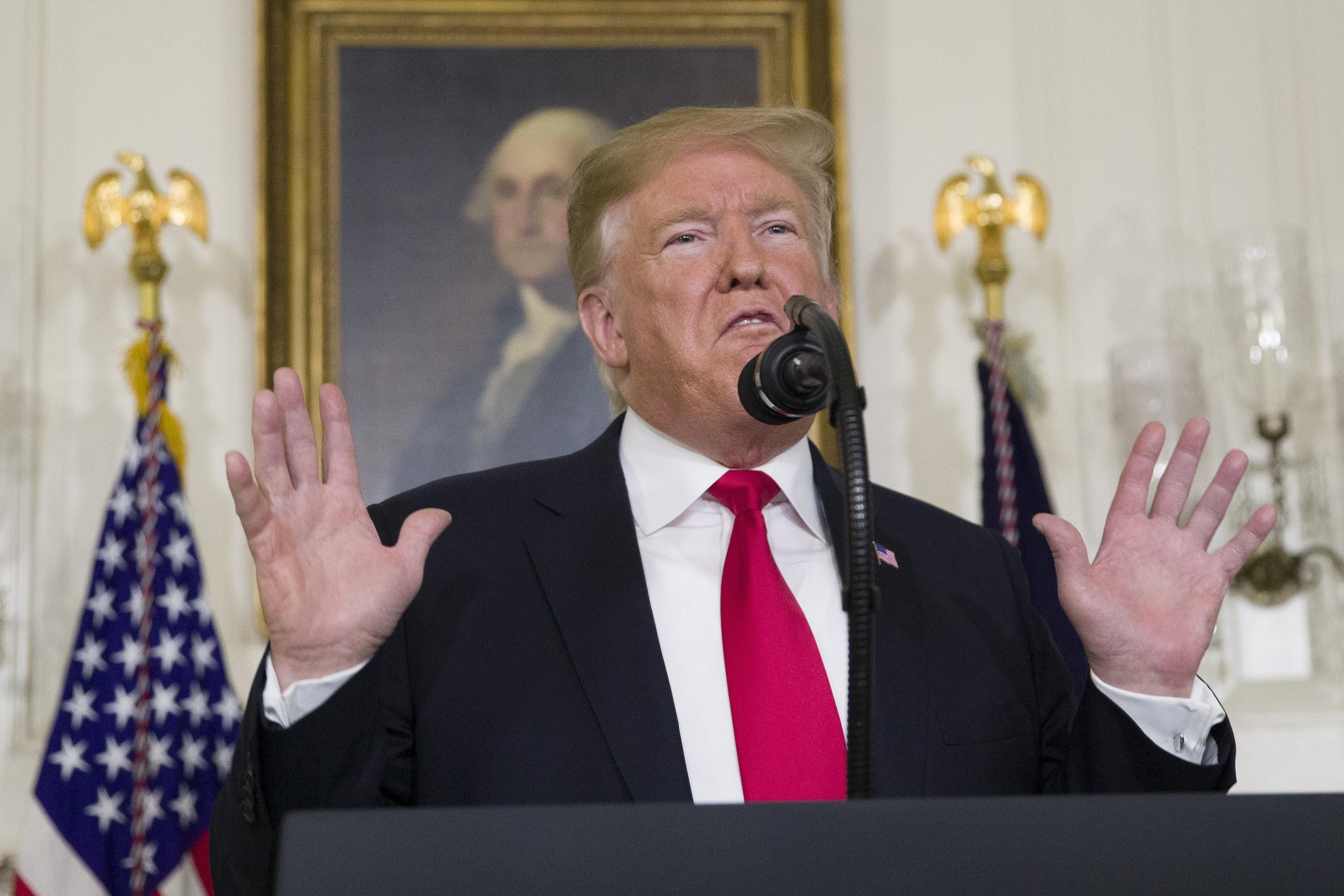 President Donald Trump speaks about the partial government shutdown, immigration and border security in the Diplomatic Reception Room of the White House in Washington on January 19.
AP
AP   |   Washington, D.C.   |   Published 20.01.19, 06:03 AM

In a bid to break the shutdown stalemate, President Donald Trump offered to extend temporary protections for young people brought to the US illegally as children and those fleeing disaster zones in exchange for his long-promised border wall. But while Trump cast the move as a 'common-sense compromise,' Democrats were quick to dismiss it at a 'non-starter'.

With polls showing a majority of Americans blaming him and Republicans for the impasse, Trump said from the White House that he was there 'to break the logjam and provide Congress with a path forward to end the government shutdown and solve the crisis on the southern border'.

Hoping to put pressure on Democrats, the White House billed the announcement as a major step forward. But Trump did not budge on his $5.7 billion demand for the wall and, in essence, offered to temporarily roll-back some of his own hawkish immigration actions — actions that have been blocked by federal courts.

Following a week marked by his pointed clashes with House Speaker Nancy Pelosi, it was not clear if Trump's offer would lead to serious steps to reopen the government, shut for a record 29 days. Trump's move came as hundreds of thousands of federal workers go without pay cheques, with many enduring financial hardship. Many public services are unavailable to Americans during the closure.

Democrats dismissed Trump's proposal even before his formal remarks. Pelosi said the expected offer was nothing more than 'a compilation of several previously rejected initiatives' and that the effort could not pass the House

Senate minority leader Chuck Schumer also panned the proposal as 'more hostage taking,' saying that it was Trump who had 'single-handedly' imperilled the future of the immigrants he proposed to help.

The New York Democrat said there is only 'one way out' of the shutdown. 'Open up the government, Mr. President, and then Democrats and Republicans can have a civil discussion and come up with bipartisan solutions,' he said.

Democrats had made their own move late on Friday to try to break the impasse when they pledged to provide hundreds of millions of dollars more for border security. But Trump, who has yet to acknowledge that offer, laid out his own plan, which officials said had been in the works for days.

Seeking to cast the plan as a bipartisan way forward, he said on Saturday that he was incorporating ideas from 'rank-and-file' Democrats, as top Democrats made clear they had not been consulted. He also said Senate majority leader Mitch McConnell would bring the legislation to a vote this week, though Democrats appeared likely to block it. McConnell had previously stated that no vote should be held in the Senate until Trump and Democrats agreed on a bill.

Trump's plan seems to stand little chance of getting the 60 votes needed in the Senate. Chris Coons of Delaware, a Democrat the White House has looked to as a possible partner on immigration negotiations, said he will not support it. And Lisa Murkowski of Alaska, another key centrist, said she would study the details of the plan but did not commit to vote for it.

She added of the shutdown: 'This needs to end now.'

Trump's remarks from the Diplomatic Room marked the second time he has addressed the nation as the partial shutdown drags on. On this occasion, he sought to strike a diplomatic tone, emphasising the need to work across the aisle. He maintained a border barrier was needed to block what he describes as the flow of drugs and crime into the country — but described 'steel barriers in high-priority locations' instead of 'a 2,000-mile concrete structure from sea to sea.'

The proposal was met with immediate criticism from some conservative corners, including NumbersUSA, which seeks to reduce both legal and illegal immigration to the US. 'The offer the President announced today is a loser for the forgotten American workers who were central to his campaign promises,' said Roy Beck, the group's president.

At the other end of the political spectrum, Trump's offer was panned by progressive groups, with Anthony Romero, the executive director of the American Civil Liberties Union, calling it a 'one-sided proposal.'

Trump embraced the shutdown in December in large part because of angry warnings from his most ardent supporters that he was passing up on his last, best shot to build the wall before Democrats took control of the House in the new year. After his announcement Saturday, some supporters appeared unhappy with his effort to bridge the divide with Democrats. 'Trump proposes amnesty,' tweeted conservative firebrand Ann Coulter. 'We voted for Trump and got Jeb!' she said, in a reference to Trump's 2016 rival, Jeb Bush.

In a briefing with reporters, Vice-President Mike Pence defended the proposal from criticism from the right. 'This is not an amnesty bill,' he insisted.

White House acting chief of staff Mick Mulvaney also sought to increase the pressure on congressional Democrats in advance of Tuesday, the deadline for the next federal pay period and the day officials said McConnell would begin to move on legislation. 'If the bill is filibustered on Tuesday...people will not get paid,' he said.

Trump's son-in-law and senior aide, Jared Kushner, along with Pence, had led the efforts build the plan Trump announced on Saturday, according to three people familiar with White House thinking who were not authorized to speak publicly. After a heated meeting with Pelosi and Schumer that Trump stormed out of, the president directed his aides to bypass Democratic leaders and instead reach out to rank-and-file members for ideas.

To ensure wall funding, Trump said he would extend temporary protections for three years for 'Dreamers,' young people brought to the country illegally as children. Administration officials said the protections would apply to the approximately 700,000 people currently enrolled in the Obama-era program shielding them from deportation, and not all those who could be eligible. The plan would offer no pathway to citizenship for those immigrants — a deal breaker for many Democrats.

Trump also proposed a three-year extension to the temporary protected status the US offers to immigrants fleeing countries affected by natural disasters or violence. Officials said the exemption would apply to about 300,000 people who currently live in the US under the programme and have been here since 2011. That means people from El Salvador, Guatemala, Honduras and Haiti — countries that saw the status revoked since Trump took office — would get a reprieve.