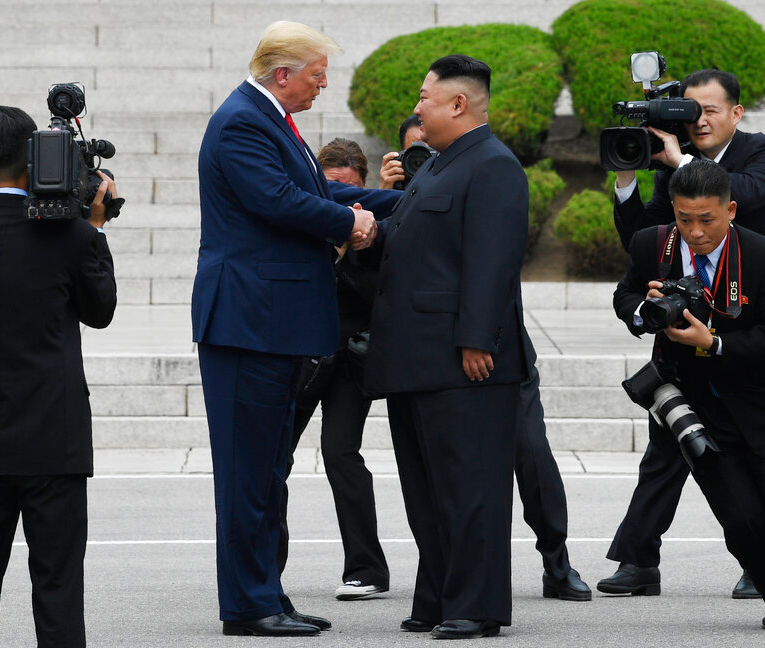 President Donald Trump became the first sitting American commander-in-chief to set foot in North Korea when he met Kim Jong-un at the heavily fortified Demilitarised Zone on Sunday and the two agreed to restart negotiations on a long-elusive nuclear agreement.

Greeted by a beaming Kim, the President stepped across a low concrete border marker at 3.46pm local time and walked 20 paces to the base of a building on the North Korean side for an unprecedented, camera-friendly display of friendship.

The drama was magnified by the choice of the Panmunjom truce village as the venue, where 66 years ago Americans and North Koreans had huddled to draw up the Military Demarcation Line following the bitter 1950-53 war.

Never before had American and North Korean leaders got together at the military demarcation line, where heavily armed forces have faced off across a tense divide for over six decades since the end of fighting in the Korean War.

“It is good to see you again,” an exuberant Kim told the President through an interpreter. “I never expected to meet you in this place.”

After about a minute on officially hostile territory, Trump escorted Kim back over the line into South Korea, where the two briefly addressed journalists before slipping inside the building known as Freedom House for a private conversation along with President Moon Jae-in of South Korea.

“This has a lot of significance because it means that we want to bring an end to the unpleasant past and try to create a new future,” Kim told reporters. “So it’s a very courageous and determined act.”

“Stepping across that line was a great honour,” Trump replied. He said he would invite Kim to the White House.

A showman by nature and past profession, Trump delighted in the drama of the moment, which he had arranged with a surprise Twitter invitation barely 24 hours earlier.

The Panmunjom encounter had been cast as a brief handshake, not a formal negotiation, but the two ended up together for a little over an hour. Trump said he and Kim had agreed to designate negotiators to resume talks in the next few weeks, four months after they collapsed.

Asked later if the North Korean negotiators were still alive following reports of a purge, Trump said: “I think they are. I can tell you who the main person is. And I would hope the rest are, too.”

Trump was already scheduled to make an unannounced visit to the DMZ, and he portrayed the idea of meeting Kim as a spontaneous one, although he had been musing out loud about it for days. Still, it caught even his own staff by surprise and forced an extraordinary scramble to arrange logistics and security, a task that would ordinarily take days or weeks.

North Korean security personnel were particularly aggressive on Sunday, pushing and pulling journalists and leaving bruises on the American side. Stephanie Grisham, the newly minted White House press secretary, had a trial by fire and emerged roughed up from body blows by North Korean officers, according to journalists at the scene.

Kim said he knew nothing about a possible meeting until the President’s tweet. Trump expressed relief that Kim came. “If he didn’t show up, the press was going to make me look very bad,” he said. So when Kim arrived, “he made me look very good.”

Trump escorted Kim back to the demarcation line. “Certainly, this was a great day; this was a very legendary, very historic day,” Trump exulted afterwards, before adding a cautionary note. “It’ll be even more historic if something comes out of it.”