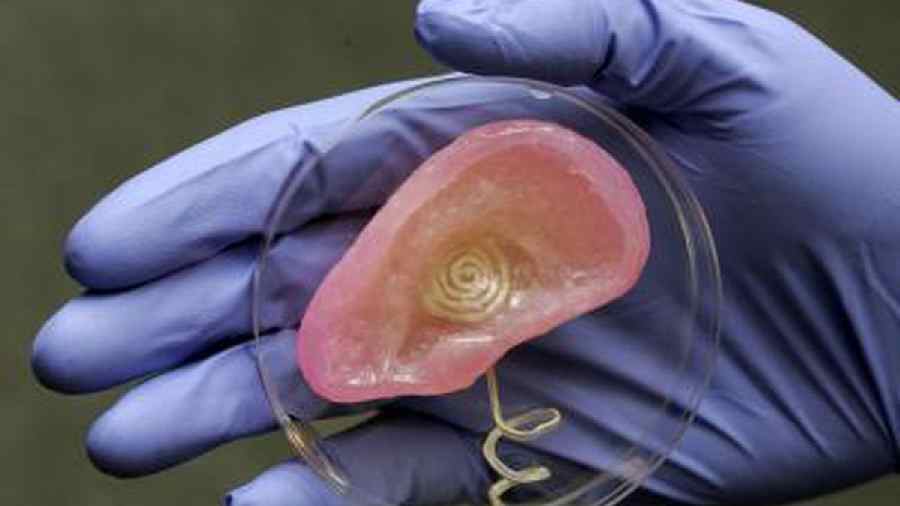 The new ear, transplanted in March, will continue to regenerate cartilage tissue, giving it the look and feel of a natural ear
Representational picture
Roni Caryn Rabin   |   Published 03.06.22, 01:06 AM

A 20-year-old woman who was born with a small and misshapen right ear has received a 3D printed ear implant made from her own cells, the manufacturer announced on Thursday. Independent experts said that the transplant, part of the first clinical trial of a successful medical application of this technology, was a stunning advance in the field of tissue engineering.

The new ear was printed in a shape that precisely matched the woman’s left ear, according to 3DBio Therapeutics, a regenerative medicine company based in Queens. The new ear, transplanted in March, will continue to regenerate cartilage tissue, giving it the look and feel of a natural ear, the company said.

“It’s definitely a big deal,” said Adam Feinberg, a professor of biomedical engineering and materials science and engineering at Carnegie Mellon University. Dr Feinberg, who is not affiliated with 3DBio, is a co-founder of FluidForm, a regenerative medicine company that also uses 3-D printing. “It shows this technology is not an ‘if’ anymore, but a ‘when’,” he said.

The results of the woman’s reconstructive surgery were announced by 3DBio in a news release. Citing proprietary concerns, the company has not publicly disclosed the technical details of the process, making it more difficult for outside experts to evaluate. The company said that federal regulators had reviewed the trial design and set strict manufacturing standards, and that the data would be published in a medical journal when the study was complete.

The clinical trial, which includes 11 patients, is still ongoing, and it’s possible that the transplants could fail or bring unanticipated health complications. But since the cells originated from the patient’s own tissue, the new ear is not likely to be rejected by the body, doctors and company officials said.

3DBio’s success, seven years in the making, is one of several recent breakthroughs in the quest to improve organ and tissue transplants. In January, surgeons in Maryland transplanted a genetically modified pig’s heart into a 57-year-old man with heart disease, extending his life by two months. Scientists are also developing techniques to extend the life of donor organs so they do not go to waste; Swiss doctors reported this week that a patient who received a human liver that had been preserved for three days was still healthy a year later.

United Therapeutics Corp, the company that provided the genetically engineered pig for the heart procedure, is also experimenting with 3-D printing to produce lungs for transplants, a spokesman said. And scientists from the Israel Institute of Technology reported in September that they had 3-D printed a network of blood vessels, which would be necessary to supply blood to implanted tissues.

Companies have previously used 3-D printing technology to produce custom-fit prosthetic limbs made of plastic and lightweight metals. But the ear implant, made from a tiny glob of cells harvested from the woman’s misshapen ear, appears to be the first known example of a 3-D printed implant made of living tissues.

The patient, who is from Mexico, was born with microtia, a rare birth defect that causes the auricle, or external part of the ear, to be small and malformed (it also can affect hearing in the ear). With more research, company executives said, the technology could be used to make many other replacement body parts, including spinal discs, noses, knee menisci, rotator cuffs and reconstructive tissue for lumpectomies. Further down the road, they said, 3-D printing could even produce far more complex vital organs, like livers, kidneys and pancreases.

“This is so exciting, sometimes I have to temper myself a little bit,” said Dr Arturo Bonilla, a paediatric ear reconstructive surgeon in San Antonio who performed the woman’s implant surgery. The trial was funded by 3DBio Therapeutics, but Dr Bonilla does not have any financial stake in the company. “If everything goes as planned, this will revolutionise the way this is done,” he said.

James Iatridis, who heads a spine bioengineering laboratory at Mount Sinai’s Icahn School of Medicine, said that other 3-D printed tissue implants were in the pipeline, but that he was unaware of any other products being tested in a clinical trial.

“The 3-D ear implant is then a proof of concept to evaluate biocompatibility, and shape matching and shape retention, in living people,” Dr Iatridis said.

Still, the external part of the ear is a relatively simple appendage that is more cosmetic than functional, said Dr Feinberg of Carnegie Mellon. He cautioned that the path towards solid organs — like livers, kidneys, hearts and lungs — was still a long one. “Just going from an ear to a spinal disc is a pretty big jump, but it’s more realistic if you’ve got the ear,” he said.

The 3-D printing manufacturing process creates a solid, three-dimensional object from a digital model. The technology generally involves a computer-controlled printer depositing material in thin layers to create the precise shape of the object.

The new ear implant from 3DBio Therapeutics integrates several proprietary technologies, executives said, beginning with a method for turning a small sample of a patient’s cells into billions of cells. The company’s 3-D printer uses a collagen-based “bio ink” that is safe in the body and that keeps all of the materials sterile.

All the research and manufacturing takes place under one roof, in a new, unassuming brick building in Queens equipped with hygienic “clean rooms”.

“It comes in as a biopsy from the patient, and it leaves a living ear,” Daniel Cohen, 3DBio’s chief executive and co-founder, explained during a tour of the facility last week.

The patient who received the new ear was one of the first to have had a successful transplant as part of the clinical trial led by Dr Bonilla.

The surgeon began by removing half of a gram of cartilage from the woman’s microtia ear remnant. He then shipped that, along with a 3-D scan of her healthy ear, from San Antonio to the 3DBio building in Long Island City, Queens. At the facility, the patient’s chondrocytes — cells responsible for cartilage formation — were isolated from the tissue sample and grown in a proprietary slurry of nutrients, proliferating into billions of cells.