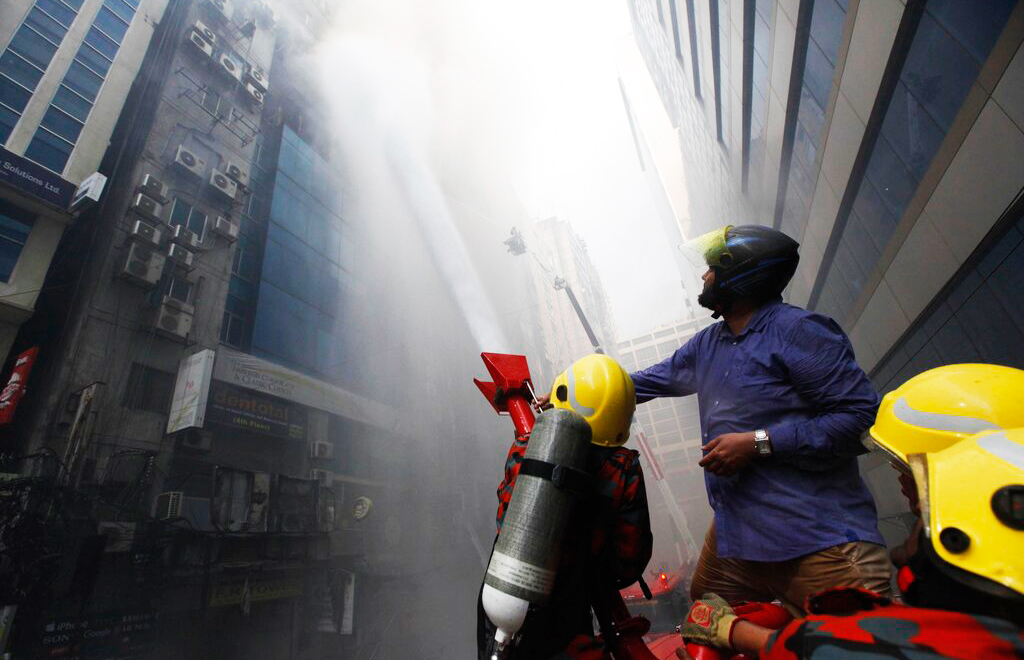 A commuter watches firefighters work to douse a fire in a multi-storied office building in Dhaka, Bangladesh, on Thursday
Picture by AP
Reuters And PTI   |   Dhaka   |   Published 29.03.19, 07:20 PM

A high-rise commercial building in the Bangladeshi capital where a blaze this week killed at least 25 people lacked proper fire exits, government officials said, prompting a senior minister to describe the incident as “murder”.

Lax regulations and poor enforcement have often been blamed for several large fires in the south Asian nation that have led to hundreds of deaths in recent years, at least 96 since last month.

Authorities have launched an investigation into the cause of Thursday’s fire, in which at least seven people, including a Sri Lankan, died after jumping off the 22-storey structure.

“There were no proper fire exits in the building that houses many offices and several restaurants,” Julfikar Rahman, director of the Fire Service and Civil Defence, said.

“If the building had proper fire exits, people would have been able to come out. There was little fire-fighting equipment in the building and it was not in working condition.”

At just 0.6m and 1.2m wide, the building’s two exits were too narrow for people inside to leave smoothly, and were blocked by obstructions that made the task harder, he added.

Reuters could not ascertain who owns the building, and a telephone number for the purported owner was switched off. The Dhaka development authority said it was investigating how the owner, who had permission only to build 18 stories, managed to extend them to 22.

“It’s not an accident, it’s murder,” public works and housing minister Rezaul Karim told reporters after visiting the site, where firefighters combed through the ashes. “Legal action will be taken against those responsible for violating the building code, no matter how powerful they are.”

Helicopters had joined 22 firefighting units in battling the fire, along with police and armed forces, as some of those trapped in the building waved desperately for help from its windows and roof. The blaze comes a month after an inferno killed 71 people in an old neighbourhood of the city.

The injured are now being treated at Dhaka Medical College Hospital’s burn unit.