It is more transmissible than the viruses that cause MERS, Sars, Ebola, the common cold, the seasonal flu and smallpox 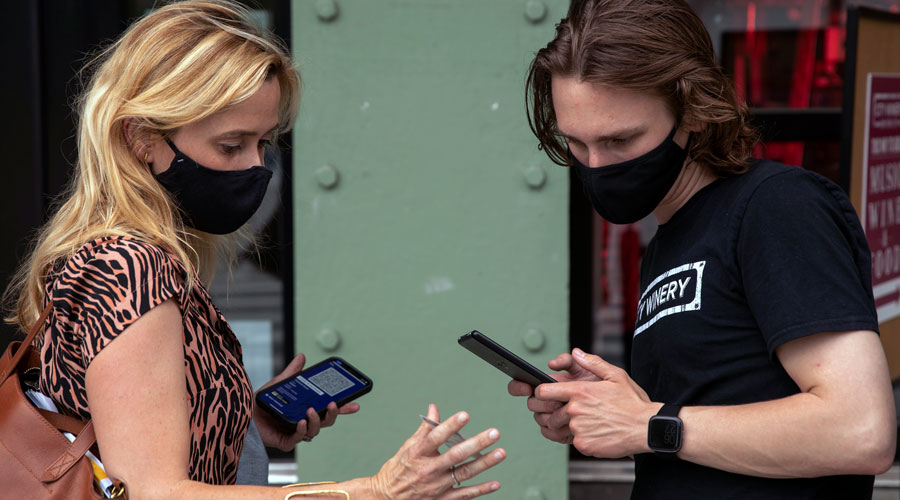 A customer shows her vaccination card to a host at City Winery, a restaurant in New York, on May 26, 2021. Many restaurants with policies requiring their customers to be vaccinated are asking for physical or digital proof of their vaccination status.
(Victor J. Blue/The New York Times)
Apoorva Mandavilli   |   New York   |   Published 31.07.21, 12:49 AM

The Delta variant is much more contagious, more likely to break through protections afforded by the vaccines and may cause more severe disease than all other known versions of the virus, according to an internal presentation circulated within the Centers for Disease Control and Prevention.

Dr Rochelle P. Walensky, the director of the agency, acknowledged on Tuesday that vaccinated people with so-called breakthrough infections of the Delta variant carry just as much virus in the nose and throat as unvaccinated people, and may spread it just as readily, if less often.

But the internal document lays out a broader and even grimmer view of the variant.

The Delta variant is more transmissible than the viruses that cause MERS, Sars, Ebola, the common cold, the seasonal flu and smallpox, and it is as contagious as chicken pox, according to the document, a copy of which was obtained by The New York Times.

The immediate next step for the agency is to “acknowledge the war has changed,” the document said. Its contents were first reported by The Washington Post on Thursday evening.

The document’s tone reflects alarm among CDC scientists about Delta’s spread across the country, said a federal official who has seen the research described in the document. The agency is expected to publish additional data on the variant on Friday.

“The CDC is very concerned with the data coming in that Delta is a very serious threat that requires action now,” the official said.

There were 71,000 new cases per day on average in the United States, as of Thursday. The new data suggest that vaccinated people are spreading the virus and contributing to those numbers — although probably to a far lesser degree than the unvaccinated.

Dr Walensky has called transmission by vaccinated people a rare event, but other scientists have suggested it may be more common than once thought.

The agency’s new masking guidelines for vaccinated people, introduced on Tuesday, were based on the information presented in the document. The CDC recommended that vaccinated people wear masks indoors in public settings in communities with high transmission of the virus.

But the internal document hints that even that recommendation may not go far enough. “Given higher transmissibility and current vaccine coverage, universal masking is essential,” the document said.

The agency’s data suggest that people with weak immune systems should wear masks even in places that do not have high transmission of the virus. So should vaccinated Americans who are in contact with young children, older adults, or otherwise vulnerable people.