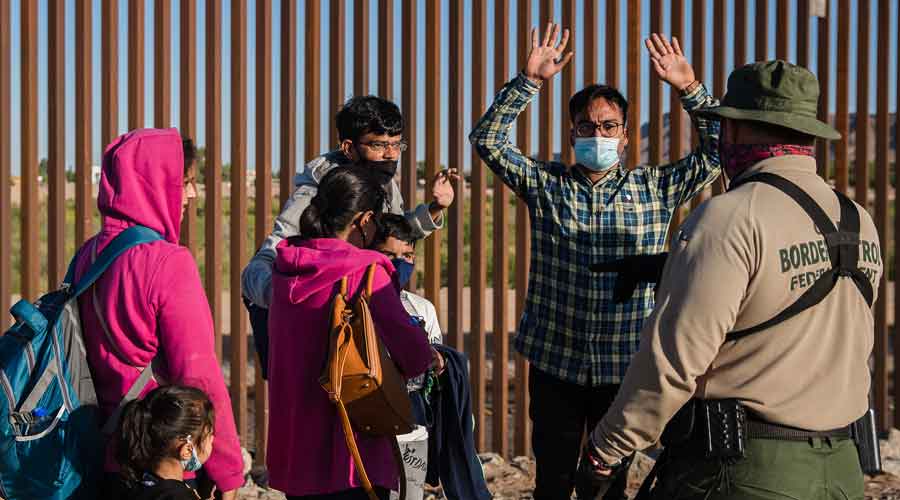 Standing by the hulking border wall, a US Border Patrol agent watched as a car dropped off passengers at the edge of a road on the Mexican side. “Oh, no,” he muttered. “Here come some more.”

In the next hours, dozens of people would descend a bare hillock, pass a puddle where the Colorado River trickles and, without fanfare, pass through a gap in the rust-beam barrier that soars between the US and Mexico. They had completed the final leg of journeys that began weeks or months earlier in Brazil, Cuba, India and Venezuela.

Carrying dusty backpacks and dreams of new jobs in new cities, the unauthorised migrants did not sprint across the road to hide in the vast alfalfa fields, as so many border crossers have in the past. Many of them walked towards the agent, arms raised in surrender, confident that they would not be turned away. Javier Gomez fell to his knees and prayed, his daughter, Maria, by his side.

“We sold our house, everything, to come,” said  Gomez, an itinerant salesman whose family left Venezuela three months ago to make the journey northward over land. “We are blessed to have made it.”

The Biden administration continues to grapple with swelling numbers of migrants along the southwestern border. In April alone, 178,622 people were encountered by the Border Patrol, the highest number in 20 years.

Most of them are from Central America, fleeing gang violence and natural disasters.

But the past few months have also brought a much different wave of migration that the Biden administration was not prepared to address: pandemic refugees.

They are people arriving in ever greater numbers from far-flung countries, including India, where the coronavirus has caused unimaginable levels of illness and death and decimated economies and livelihoods. If eking out an existence was challenging in such countries before, in many of them it has now become almost impossible.

According to official data released this week, 30 per cent of all families encountered along the border in April hailed from countries other than Mexico and the Central American countries of Guatemala, Honduras and El Salvador, compared to just 7.5 per cent in April 2019, during the last border surge.

The coronavirus pandemic has had far-reaching consequences for the global economy, erasing hundreds of millions of jobs. And it has disproportionately affected developing countries, where it could set back decades of progress, according to economists. About 13,000 migrants have landed in Italy, the gateway to Europe, so far this year, three times as many as in the same period last year.

At the US-Mexico border in recent months, agents have stopped people from more than 160 countries, and the geography coincides with the path of the virus’s worst devastation.

From India and elsewhere in Asia, they embark on Phileas Fogg journeys. Some reported taking buses in their hometowns to a big city, like Mumbai, where they boarded planes to Dubai and then connected through Moscow, Paris and Madrid, finally flying to Mexico City. From there, they embarked on the two-day bus ride to reach the Mexico-US border.

Many of them are entering the US through wide openings in the border wall near Yuma, sparing them from the risky routes through remote desert regions, where migrants frequently lose their bearings, or across the Rio Grande in Texas, where migrants occasionally drown.

Border Patrol agents working in the Yuma sector said the number of migrants arriving there now dwarfs the surge of Central Americans two years ago that prompted some of the harsh immigration measures imposed by former President Donald J. Trump. They said they were struck by how far people had travelled.

US asylum law grants protection to those suffering persecution on account of their race, religion, nationality, political opinion or membership in a particular social group.

But large numbers of migrants have been driven to the US border by economic hardship in their home countries, and now the pandemic has widened that circle. Though no records are kept at the border on the reasons people have cited in choosing to move, interviews with many of those arriving at the border, along with Border Patrol officials, shelter operators and immigration scholars, suggested that the job collapse brought about by the coronavirus — coupled with the Biden administration’s more welcoming policies — is driving much of the new surge.

Most migrants are being released to await immigration hearings that could take years, and if they fail to win asylum, many may wind up staying anyway, adding to the millions of immigrants living in the US without permission.

Diego Piña Lopez, who runs Casa Alitas, a shelter in Tucson, Arizona, that receives migrants from Yuma after they have been processed by the Border Patrol, has had to expand its language and cultural resources to handle the migrants passing through. “We never worked with such large numbers with this diversity,” he said, citing Arabic, Haitian Creole, Hindi and Portuguese speakers.

The spike in Arizona prompted governor Doug Ducey to declare a state of emergency in several counties last month and to deploy the National Guard along the border. Republican lawmakers have been sharply critical of the admission of tens of thousands of young migrants, along with a large number of families, who would have been turned back under the Trump administration. Even Senator Mark Kelly, a Democrat, recently criticised President Biden for not addressing “the immediate crisis at the border”.

During a single weekend in early May, agents in the Yuma area intercepted 1,600 migrants.

“So many people around the world saw their standard of living slide backward, it’s no surprise that they would jump at the chance to get into the US when they hear that others have managed to cross from Mexico successfully,” said Andrew Selee, president of the non-partisan Migration Policy Institute.

Most of the long-distance migrants have been crossing in the Yuma sector, where openings in the fence are there intentionally, to enable the Bureau of Reclamation to reach agricultural canals near the Colorado River, or in places where the border fence is just waist high, enough to block vehicles but not people on foot.

But some migrants have been scaling the newly reinforced, 30-foot bollard boundary right in the vicinity of a plaque where Trump commemorated the 200th mile of his border wall system.

A huge tent has gone up in the parking lot behind the Border Patrol’s headquarters in Yuma to accommodate migrants taken into custody, who must be interviewed and undergo background checks.

Some are transferred to Immigration and Customs Enforcement detention. But most are simply being released to non-profit aid centres, where they spend a day or two before travelling to join friends and relatives elsewhere in the US.

Measures imposed under the Obama administration, such as fitting migrants with ankle monitors to ensure that they attend court hearings later, are only sparingly used.

Along the gravel road heading south from Yuma, signs of recent crossings are ubiquitous: water bottles, shirts, beanies, a rattle. An abandoned blue backpack was filled with disposable diapers and baby clothes. In one spot, two mattresses were parked against the US side of the wall to ensure a soft landing for migrants willing to take a leap.

On one recent morning, two families from India made their way across the border, the men with their arms raised, their wives and children following behind. One family said they hoped to reach Georgia; the other was Florida-bound.

They had flown through five countries to reach Mexico City, where they had boarded a bus to the US-Mexico border. A cabdriver connected to coyotes had deposited them on a road from which they walked to a gap in the wall.

Close behind them came a Cuban man headed for Miami.

A few minutes later, a little girl with a Mickey Mouse sweater dangling from her waist came through with three adults, headed for Boston, where friends and jobs awaited.

Then came the Gomez family, the ones who had come from Venezuela, dragging wheeled baggage.  Gomez’s wife, Natasha, held her three grandchildren and wept. “In Venezuela, there is no food, no electricity, no medicine, no work,” she said.

Border Patrol agents checked documents and jotted down names of the migrants who, to escape the oppressive heat, had gathered in the shade cast by the wall.

Soon a van arrived to ferry them to the Border Patrol station — and an uncertain, but hopeful, new chapter.