Pace faster than US and UK, 7 times that of India 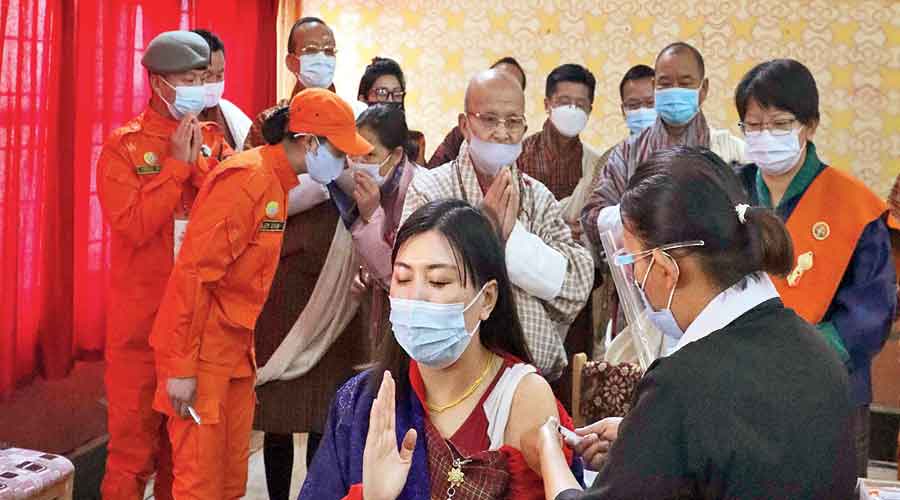 The Lunana area of Bhutan is remote even by the standards of an isolated Himalayan kingdom: It covers an area about twice the size of New York City, borders far western China, includes glacial lakes and some of the world’s highest peaks, and is inaccessible by car.

Still, most people living there have already received a coronavirus vaccine.

Vials of the Oxford-AstraZeneca vaccine arrived last month by helicopter and were distributed by health workers, who walked from village to village through snow and ice. Vaccinations proceeded in the area’s 13 settlements even after yaks damaged some of the field tents that volunteers had set up for patients.

“I got vaccinated first to prove to my fellow villagers that the vaccine does not cause death and is safe to take,” Pema, a village leader in Lunana who is in his 50s and goes by one name, said by telephone. “After that, everyone here took the jab.”

Lunana’s campaign is part of a quiet vaccine success story in one of Asia’s poorest countries. As of Saturday, Bhutan, a Buddhist kingdom that has emphasised its citizens’ well-being over national prosperity, had administered a first vaccine dose to more than 478,000 people, over 60 per cent of its population.

The vast majority of Bhutan’s first doses were administered at about 1,200 vaccination centres over a weeklong period in late March and early April. As of Saturday, the country’s vaccination rate of 63 doses per 100 people was the sixth highest in the world, according to a New York Times database.

That rate was ahead of those of the United Kingdom and the United States, more than seven times that of neighbouring India and nearly six times the global average.

Bhutan is also ahead of several other geographically isolated countries with small populations, including Iceland and the Maldives.

Dasho Dechen Wangmo, Bhutan’s health minister, attributed its success to “leadership and guidance” from the country’s king, public solidarity, a general absence of vaccine hesitancy, and a primary health care system that “enabled us to take the services even to the most remote parts of the country”.

“Being a small country with a population of just over 750,000, a two-week vaccination campaign was doable,” Dechen Wangmo said in an email. “Minor logistic issues were faced during the vaccination but were all manageable.”

All of the doses used so far were donated by the government of India, where the drug is known as Covishield and manufactured by the Serum Institute of India, the world’s largest vaccine producer. Bhutan’s government has said it plans to administer second doses about eight to 12 weeks after the first round, in line with guidelines for the AstraZeneca vaccine.

Will Parks, the representative in Bhutan for Unicef, the United Nations agency for children, said the first round was a “success story, not only in terms of the coverage but also in the way the vaccination drive was executed collectively from the planning to the implementation”.

“It involved participation from the highest authority to local community,” hesaid.

The campaign has relied in part on a corps of volunteers, known as the Guardians of the Peace, who operate under the authority of Bhutan’s king, Jigme Khesar Namgyel Wangchuck.