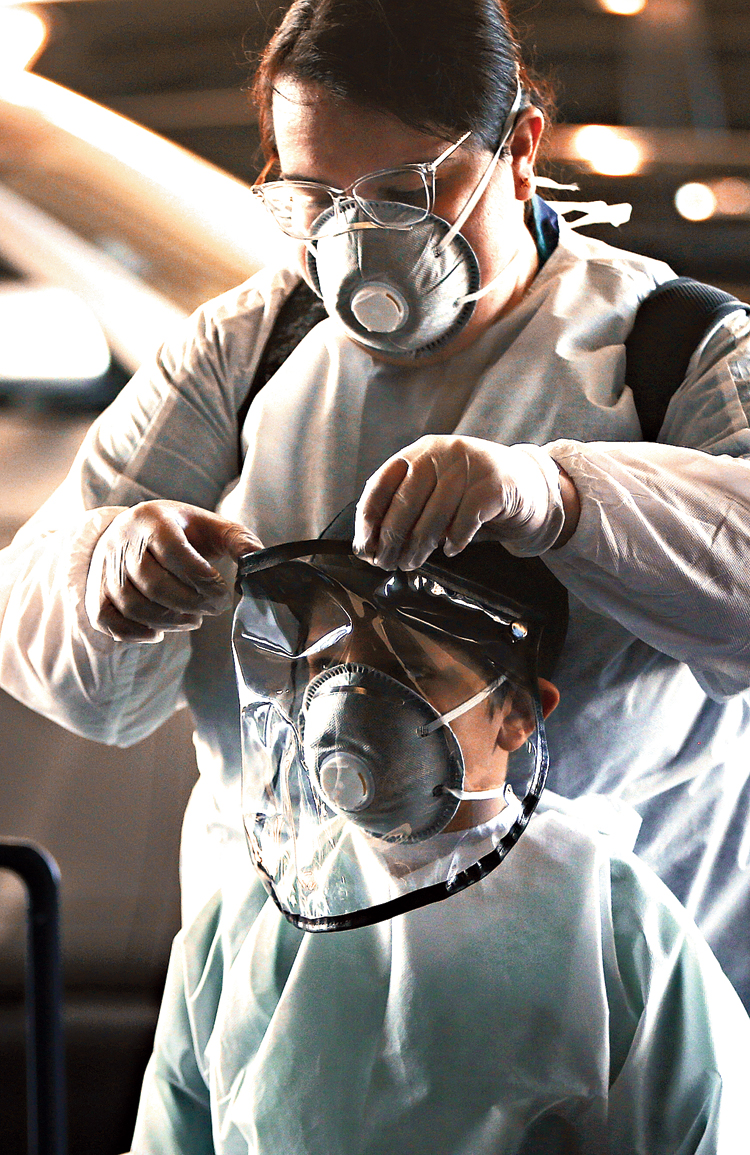 New York resident Stefanie Ruiz Diaz adjusts the face shield on her nephew Matias before boarding a flight to Miami at the Silvio Pettirossi airport on the outskirts of Asuncion, Paraguay, where they were visiting family.
(AP)
Vivian Lin And Thomas Fuller/New York Times News Service   |   San Francisco   |   Published 24.04.20, 07:33 PM

The thought of getting on a plane is far from most people’s minds at the moment, as they shelter in their homes. But some people have no choice but to fly now, whether it is returning from a long trip or rushing to leave a country as a visa expires.

In the days of the coronavirus, travellers are often taking extreme precautions to protect themselves. They wear anything from plastic ponchos to laboratory goggles to biohazard suits. They wipe down tray tables and arm rests with disinfectant. Some passengers say they avoid using the lavatory, even on long transcontinental flights, believing there is a higher risk of infection there. Many pack their own food, and keep their protective gear on even as they sleep.

Lacking definitive information about how long the virus might linger on clothing or even one’s own hair, they reasoned that more protection was better than less.

When Billy Chan flew home to Hong Kong from London in mid-March, he wore a disposable protective suit, goggles and an N95 mask. He changed his mask twice during the 13-hour flight, using hand sanitiser each time.

“I didn’t see anyone go on or off the plane without a mask,” said Chan, who needed to return to Hong Kong to renew his visa to Britain. Most passengers, he reported, wore goggles or sunglasses as well.

“I didn’t eat, I didn’t drink, I didn’t wander around on the plane,” he said.

Stacie Tan, who flew to her home in Malaysia from Oregon on April 1, wore goggles, gloves and a mask on the plane.

“I knew that someone might look at me and laugh,” Tan said. “It’s better than lying in the hospital, right?”

The model Naomi Campbell posted a photo of herself on Instagram accessorised in pink surgical gloves, a turquoise face mask and baggy white coveralls, the kind normally worn when removing asbestos.

Linsey Marr, an expert in airborne disease transmission at the Virginia Polytechnic Institute, said it made sense to wear protective gear on an airplane, given the tight quarters.

“I think the most important thing to do would be to wear a face covering, a mask of some sort,” said Dr Marr, who studies how viruses spread in the air. “Goggles aren’t a bad idea, especially if they will prevent you from touching your eyes.”

While a full-body protective suit “can’t hurt”, she said, the most important thing is to cover your nose and mouth, wash your hands a lot and avoid touching your eyes.

“Certainly, I wouldn’t want to sit next to, or right in front of, or right behind someone else,” Dr Marr said.

The Centers for Disease Control and Prevention does not explicitly advise against flying, but it does warn that “crowded travel settings” could increase a person’s chances of infection, and there are few travel settings as crowded as a sold-out flight.

“Depending on your unique circumstances, you may choose to delay or cancel your plans,” the agency says.

What it means to fly safely in the face of the coronavirus threat is likely to evolve in the coming months. Emirates, the Dubai-based airline, announced last week that it had begun conducting rapid coronavirus tests on passengers waiting to board, and said it hoped to scale up the practice to cover more flights.

laska Airlines says it is keeping all middle seats vacant in economy class on its flights through May.

American Airlines and United Airlines, the two largest American carriers, did not respond to queries about their policies or recommendations concerning personal protective gear.

Brian Parrish, a spokesman for Southwest Airlines, said the most common protective gear worn by its staff were face masks and gloves.

“Customers travelling with Southwest are welcome to wear personal protective equipment,” Parrish said. “The only exception to this policy would be any equipment that might interfere with the safe operation of the aircraft or the safety and comfort of other customers.”

Vicky Ding, who travelled with her mother and brother to Beijing from New York by way of Hong Kong on March 18, wore a rain jacket, hairnet, a mask and goggles. Her mother brought plastic shower curtains to place on the seats, but they did not end up using them.

“The airlines were still serving food, but half the people didn’t eat it,” Ding said. She drank a protein shake through a straw.

Brian Campbell, who visited his parents’ house in Oklahoma from California in mid-March, said he wore a mask for the entire journey, starting from his ride to the airport, to avoid bringing the virus with him. His taxi driver in Oklahoma commented on the mask and questioned whether it was necessary.

“We don’t have a culture of wearing a mask around,” Campbell said. “Hopefully, now we’ll move more in that direction.”

Chan, who flew to Hong Kong in March, says he felt the precautions he had taken were justified when the Hong Kong government announced, two days after he landed, that five people who were on his flight had tested positive for the virus.

“It was tough wearing the N95 the whole time, and suffocating,” he said. “I looked really weird and awkward.”

But in hindsight, he said, “it was all necessary”.

The European Commission will next month present a set of rules for the safe reopening of air travel when coronavirus pandemic lockdowns end, including social distancing in airports and planes, the EU’s transport chief said on Wednesday.

Transport Commissioner Adina Valean said that some social distancing rules in airports and planes will have to be respected to guarantee the safety of passengers.

“All this should be part of those guidelines and probably by mid-May we can put forward this strategy we are working on,” Valean said on Twitter.

Airlines have raised concerns that measures to slow the spread of the pandemic could blight profitability long after travel restrictions end.