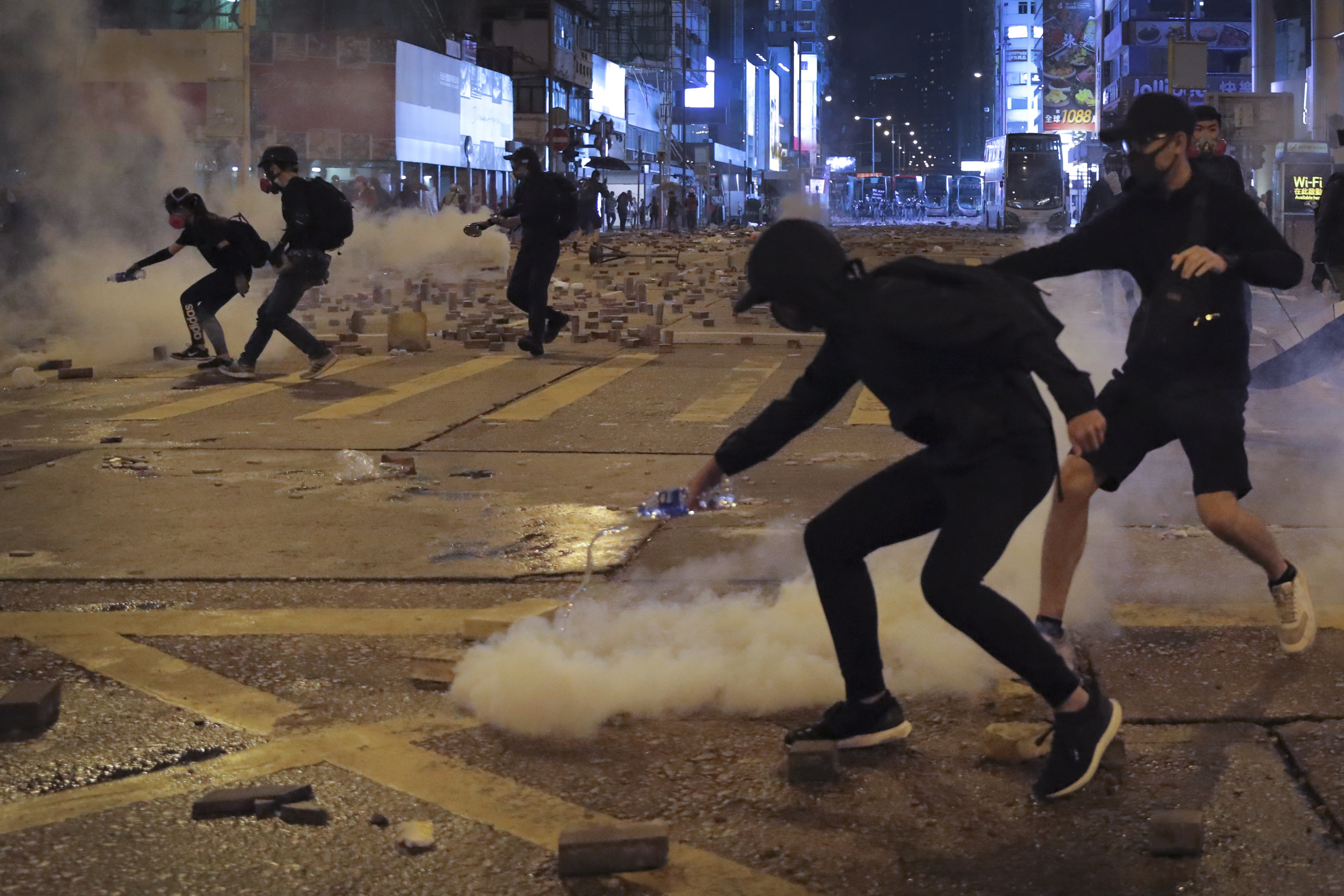 On a Hong Kong street corner, a young protester found himself staring at the end of an angry police officer’s handgun. He was shot.

Across town on an overpass, a middle-aged man argued with rowdy protesters, accusing them of lacking patriotism for the Chinese motherland. He was set on fire.

By nightfall, both were in the hospital, fighting for their lives.

The actions on Monday were the violent expressions of a city on edge and seething with resentment. The protesters are furious with a police force they see as acting with impunity, while their detractors are angry with the increasingly destructive demonstrations.

Months of anti-government protests have thrown the Chinese territory into its worst political crisis in decades, with no end in sight.

The movement, which started as a fight over an extradition bill, has morphed into a broader call for democracy and police accountability in the former British colony. But neither side seems to agree on what the future should look like under Chinese rule — and neither seems willing to compromise.

Carrie Lam, the city’s embattled chief executive, denounced the unrest on Monday, saying the escalating violence would not force the government to give in to the protesters’ demands. She called those who had set the man on fire “enemies of the people”.

Tensions had been building for days, following the death of a student last week who fell from a parking garage amid demonstrations.

The protesters see him as a martyr, and have depicted his death as another sign of excessive police violence. In response, they called for the city to join in a strike on Monday, disrupting transit en masse and messing up the morning commute.

Events across the city, including classes at most of its universities, were cancelled.

Monday’s unrest was ugly from the outset. The police officer drew a handgun on the protester as commuters, snarled by roadblocks set up by demonstrators, looked on in disbelief. Several shots rang out, and the 21-year-old man crumpled to the ground in the middle of an eerily deserted intersection.

As blood pooled on the asphalt, a crowd of angry pedestrians surrounded riot police officers who had arrived as reinforcements.

“Murderer!” some of them cried, while an officer doused the crowd with pepper spray.

Anger over the shooting quickly unspooled across several districts in the city of more than seven million people, drawing office workers in the central business district and residents in working-class neighbourhoods.

The scale of the transit disruptions on Monday was not as large as a citywide strike that protesters staged on a weekday in early August.

Yet the clashes between protesters and the police were intense by any measure; the shooting was only the third time the police have shot a protester since the demonstrations began in June.

Notably, some clashes occurred on the fringes of leafy university campuses that have in recent months generally been off limits to such violence. Protesters threw Molotov cocktails and glass bottles at police lines, while officers responded by firing tear gas and rubber bullets.

Thousands of black-clad protesters also turned up for a flash mob-style demonstration in Hong Kong’s central business district around lunchtime, creating a starkly surreal aura in an area filled with luxury malls. Some front-liners used orange traffic cones, bricks and wooden poles to set up barricades on main roads.

On the side of a Giorgio Armani store, a screen with a video ad that showed sleek models parading down a runway was defaced with graffiti: “They shoot, they murder, they are well-paid.”