The burning of fossil fuels like coal and gas supercharged phenomenon that has scorched South Asia in recent weeks, two studies have found 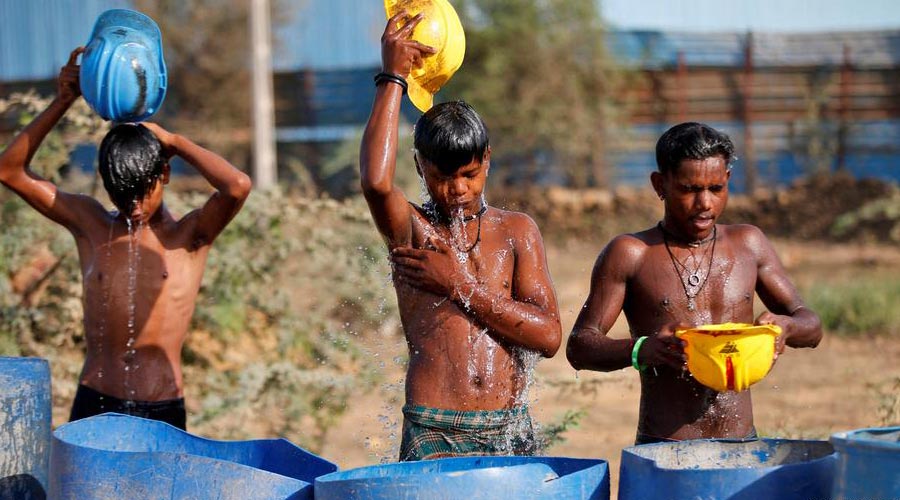 Construction workers are among the most vulnerable to deadly heat waves
Deutsche Welle
Deutsche Welle   |   Published 27.05.22, 10:52 AM

Climate change has strengthened a heat wave that for several weeks has been scorching the homes of more than 1 billion people.

The blistering heat — reported to have killed at least 90 people across India and Pakistan — would have been 1 degree Celsius cooler and 30 times less likely if people hadn't warmed the planet, according to a study published Monday by scientists from the World Weather Attribution (WWA), an international group of climate scientists. Last week, an estimate from the UK Meteorological Office said human influence had increased the likelihood of extreme heat a hundredfold.

The analyses underscore the extent to which carbon pollution is already wreaking havoc on society. The heat has sparked forest fires in India, melted glaciers that triggered flash floods in Pakistan and caused blackouts in both countries that have made it even harder for citizens who can afford air conditioning to stay safe. Crop yields have suffered at a time when global hunger is creeping up and wheat supplies have been rocked by Russia's invasion of Ukraine.

"With future global warming, of course, heat waves like this will become more common and hotter," said Krishna Achutarao, an atmospheric scientist at the Indian Institute of Technology Delhi and co-author of the WWA study.

Experts have warned that  the effect on crops is particularly worrying.

By last year, a series of crises — conflict, climate, COVID and economy — had already "undermined decades of progress" toward food security, according to a report published last Wednesday by the World Meteorological Organization, a United Nations agency that deals with weather. The number of undernourished people had plateaued in the 2010s after having fallen for decades, but is estimated to have risen sharply in 2020.

In addition, Russia's invasion of Ukraine has now disrupted grain exports from two of the world's biggest wheat exporters. Earlier this month, India, the second-largest wheat producer after China, banned exports after heat scorched farms and ravaged crops. An estimated 10% to 30% of its wheat was hit at a time when crops were supposed to ripen the most, said Aditi Kapoor, a risk management expert at the International Red Cross Red Crescent Climate Center and co-author of the WWA study. "[First] the farmers are affected, and then when the prices go up, it's the poor people buying the food who are affected," she said.

When storms and heat waves strike, WWA scientists across the world work at breakneck speeds to model the chance of extreme weather occurring in today's climate. They then compare that data with that of an imaginary world without human influence. The results are published as pre-print studies before they have undergone peer-review, so policymakers and the public can understand the role climate change played while it's still fresh in their minds.

For most weather extremes, the guiding question is whether global warming played a role or not. But with heat waves — all of which have already been made hotter and more likely by climate change — the question is simply by how much.

Since the start of the Industrial Revolution in the late 18th century, humanity has released vast quantities of sunlight-trapping gases that act like a greenhouse around the Earth. This has raised average temperatures, which brings with it a dramatic intensification of hot extremes. The biggest source of greenhouse gas pollution is burning fossil fuels like coal, oil and gas, as well as razing forests and farming animals that belch methane.

A study published in the journal Energy Research & Social Science last year found 20 companies were responsible for more than a third of the emissions from fossil fuels and cement production that heated the planet between 1965 and 2018, including the pollution from burning fuels they sold to third parties. The four biggest investor-owned fossil fuel companies — Chevron, ExxonMobil, BP and Shell — were responsible for 11% of the emissions.

The companies did not immediately respond to a DW request for comment.

People working outdoors during the daytime — like farmers and builders — are the most vulnerable to heat waves, along with elderly people and those with underlying health problems. In 2010, a heat wave in India killed 1,344 people in the western city of Ahmedabad alone. In 2015, a heat wave in Pakistan killed more than 1,000 in the capital, Islamabad.

Since the current heat wave began, an estimated 90 people have died across the two countries, according to WWA. But that figure is likely an undercount. Doctors can calculate the rise in excess mortality months after a disaster, but official statistics rarely capture the full extent of heat-related deaths.

Heat waves can have knock-on effects across the global climate. They can melt glaciers, leading to flash floods like the ones that tore Pakistan and washed away bridges in May. Hotter air also holds more moisture, resulting in heavier rainfall — though other climatic factors can work in the other direction. In the last week, northern Indian states like Assam and Arunachal Pradesh were struck by twin catastrophes of heavy rain and heat.

To save lives during heat waves, governments can warn residents ahead of the danger, coordinate health care workers to protect the most vulnerable groups and set up cooling centers to provide people with shade and water. In the last five years, 130 cities in India have rolled out heat action plans, according to the WWA. "Definitely, there's a need to scale it up much more," said Kapoorof the International Red Cross Red Crescent Climate Center.

Still, such solutions cannot help indefinitely. Many of those working on farms or building sites cannot afford to stay at home, where it may be cooler. A recent report published by the Intergovernmental Panel on Climate Change summarizing the academic literature on the effects of climate change found that "hard limits to adaptation" have already been reached in some places. More limits will be met as the planet heats up.

People have already heated the planet by about 1.1 degrees Celsius (2 degrees Fahrenheit) since the start of the Industrial Revolution. World leaders signed an agreement in 2015 to try to limit global warming to 1.5 degrees Celsius by the end of the century. Instead, most are pursuing policies that are set to nearly double that upper limit.

If global warming reaches 2 degrees Celsius, the WWA report found, a heat wave such as the recent one to hit India and Pakistan would become between two and 20 times more likely than it is today — and an extra 0.5 to 1.5 Celsius hotter.

"The human body can only get rid of heat up to a certain point," said Achutarao.