With Covid under control, local govts engage in a binge of construction projects 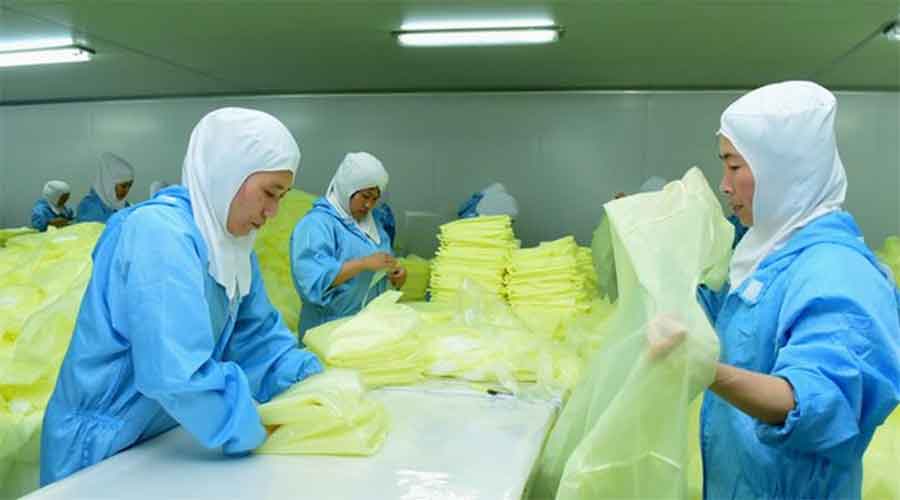 Chinese companies are making up a greater share of the world’s exports, manufacturing consumer electronics, personal protection equipment and other goods in high demand during the pandemic.
Twitter/ @WSJ
Keith Bradsher   |   Beijing   |   Published 20.10.20, 12:32 AM

As most of the world still struggles with the coronavirus pandemic, China is showing once again that a fast economic rebound is possible when the virus is brought firmly under control.

The Chinese economy surged 4.9 per cent in the July-to-September quarter compared with the same months last year, the country’s National Bureau of Statistics announced on Monday. The robust performance brings China almost back up to the roughly 6 per cent pace of growth that it was reporting before the pandemic.

Many of the world’s major economies have climbed quickly out of the depths of a contraction last spring, when shutdowns caused output to fall steeply. But China is the first to report growth that significantly surpasses where it was at this time last year.

The US and other nations are expected to report a third-quarter surge too, but they are still behind or just catching up to pre-pandemic levels.

China’s lead could widen further in the months to come. It has almost no local transmission of the virus now, while the US and Europe face another accelerating wave of cases.

The vigorous expansion of the Chinese economy means that it is set to dominate global growth — accounting for at least 30 per cent of the world’s economic growth this year and in the years to come, Justin Lin Yifu, a cabinet adviser and honorary dean of the National School of Development at Peking University, said at a recent government news conference in Beijing.

Chinese companies are making up a greater share of the world’s exports, manufacturing consumer electronics, personal protection equipment and other goods in high demand during the pandemic.

At the same time, China is now buying more iron ore from Brazil, more corn and pork from the US and more palm oil from Malaysia. That has partly reversed a nosedive in commodity prices last spring and softened the impact of the pandemic on some industries.

Still, China’s recovery has done less to help the rest of the world than in the past because its imports have not increased nearly as much as its exports. This pattern has created jobs in China but placed a brake on growth elsewhere.

China’s economic recovery has also been dependent for months on huge investments in highways, high-speed train lines and other infrastructure. And in recent weeks, the country has seen the beginning of a recovery in domestic consumption.

The affluent and people living in export-oriented coastal provinces were the first to start spending money again. But activity is resuming now even in places like Wuhan, the central Chinese city where the new coronavirus first emerged.

“You’ve had to line up to get into many restaurants in Wuhan, and for Wuhan restaurants that are popular on the Internet, the wait is two or three hours,” said Lei Yanqiu, a Wuhan resident in her early 30s.

George Zhong, a resident of Chengdu, the capital of Sichuan province in western China, said that he had made trips to three provinces in the past two months and has been actively shopping when he is home. “I spend no less than in previous years,” Zhong said.

China’s economic growth in the past three months came in slightly below economists’ forecasts of 5.2 per cent to 5.5 per cent. But the performance was still strong enough that stock markets in Shanghai, Shenzhen and Hong Kong rose in early trading on Monday.

The country’s broadening recovery could also be seen in economic statistics just for September, which were also released on Monday.

Retail sales climbed 3.3 per cent last month from a year ago, while industrial production was up 6.9 per cent.

China’s model for restoring growth may be effective, but may not be appealing to other countries.

Determined to keep local transmission of the virus at or near zero, China has resorted to comprehensive cellphone tracking of its population, weeks-long lockdowns of neighbourhoods and cities and costly mass testing in response to even the smallest outbreaks.

China’s rebound also comes with some weaknesses, particularly a jump in overall debt this year by an amount equal to as much as a third of the economy’s overall output. Much of the extra debt is either borrowing by local governments and state-owned enterprises to pay for new infrastructure.