Now 79, he has always maintained that he was just fulfilling his military duties and was defiantly unapologetic throughout the course of the proceedings 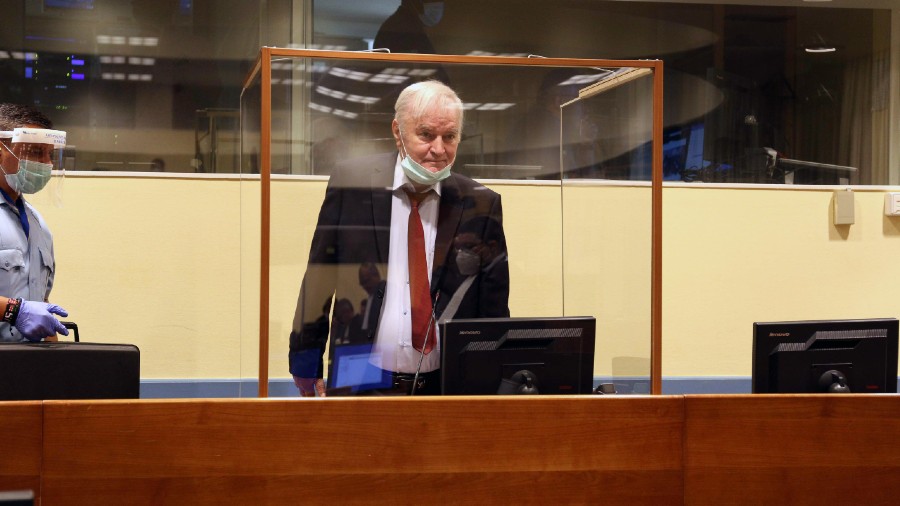 Ratko Mladic in court in The Hague in August for his appeal against a life sentence.
NYTNS
Marlise Simons And Marc Santora   |   Published 09.06.21, 03:35 AM

Nearly three decades after the outbreak of war in the Balkans, which saw some of the most shocking atrocities in Europe since the end of World War II, the conviction of the chief military commander of the bloodletting was upheld Tuesday by an international tribunal.

The commander, the Bosnian Serb former general Ratko Mladic, was convicted in 2017 of genocide, crimes against humanity and war crimes. He was sentenced to life in prison.

On Tuesday, that verdict was upheld by the International Criminal Tribunal for the Former Yugoslavia in The Hague, drawing a close to one of the darkest chapters in modern European history and ending a legal struggle that stretched back to 1995, when Mladic was first indicted.

Now 79, Mladic has always maintained that he was just fulfilling his military duties and was defiantly unapologetic throughout the course of the proceedings.

Despite securing a conviction — with the presiding judge of the original trial, Alphons Orie, saying that Mladic’s crimes ranked “among the most heinous known to humankind” — the prosecution had also appealed the verdict.

Mladic was convicted on a range of charges including attacking and murdering civilians during the 43-month siege on the Bosnian capital, Sarajevo. He was also found guilty of genocide for directing the notorious mass executions of 8,000 Muslim men and boys, after Mladic’s forces overran the U.N.-protected enclave of Srebrenica.

But prosecutors wanted the court to add another genocide verdict to include the bloodletting of 1992 — the deadliest year of the war, when some 45,000 people were killed.

The appeals panel voted 4-1 to uphold Mladic’s conviction and life sentence. One of the five, Presiding Judge Prisca Matimba Nyambe from Zambia, sided with Mladic on almost every count. But in the oral summary she read out, she did not explain the reasons behind her dissent.

Who is Ratko Mladic

Mladic’s first name, Ratko, is a diminutive form of Ratimir; in English, the name can be translated as a question: War or peace? It is a name typically given to a male baby in wartime.

Mladic told The New York Times in a 1994 interview that he was born “in what was called Old Herzegovina” — now part of the independent country of Bosnia and Herzegovina — in 1942, during World War II. Conflict was the defining theme running through his life; his actions during the war in the Balkans led to him being called “the Butcher of Bosnia.”

During World War II, the Balkans were swept up in the maelstrom of violence, with the multireligious and multinational mosaic of Serbs, who mostly had their roots in the Eastern Orthodox Christian faith; Bosniaks, who were generally Muslim; and Croats, who were usually Roman Catholics, often set against one another. About 1.7 million people in the former Yugoslavia died from 1941 to 1945.

Out of the ashes of the war, Josip Broz Tito, who became the leader of Yugoslavia, promoted a slogan to bring the fractured region together: “bratstvo i jedinstvo,” or “brotherhood and unity.”

But Tito died in 1980, and by 1991, the bonds that held Yugoslavia together had frayed to breaking point, with the country’s eventual collapse fueling years of bloody regional wars.

Mladic, who served in the Yugoslav army, was made commander of the Serbian Army in Bosnia in May 1992. After the massacre in Srebrenica in 1995 and his indictment on war crimes, Mladic at first lived openly in Serbian military headquarters, but then went into hiding and remained on the run. He was captured in 2011 and sent to The Hague to be tried.

Why the final verdict matters

The last ruling in the Mladic case comes at a time of rising fervor among Serbian nationalist groups who are committed to rewriting the history of the conflict, denying accusations of war crimes by their side and banning references to the episode from schoolbooks.

Convicted war criminals are being hailed as heroes and given prominent positions. At least one has been appointed to teach at a Serbian military war academy.

In the Serb-dominated half of Bosnia, giant paintings and posters of Mladic in his military gear appear in public areas, and he has been named the head of a war veteran’s association.

A student residence bears the name of Radovan Karadzic, the wartime Bosnian Serb political leader who is serving a life sentence for his role during the fighting.

Serge Brammertz, the Hague court’s chief prosecutor, said in a teleconference with reporters recently, “Today, glorification and denial of genocide are very much stronger than five or 10 years ago — and I have been in this job for 13 years.”

He noted that politicians throughout the region, in Bosnia, Croatia and Serbia, were still trying to use ethnic hatred to their advantage.

“The underlying attitudes are still present with many politicians,” he said. “The difference is that today they are not ashamed any more to put out their lies publicly.”

What has the tribunal accomplished?

When the tribunal was first announced in 1993 — even as the fighting still raged — the goals were to hold perpetrators of the worst atrocities to account and to establish a solid historical record of the events in the hope that it could provide the basis for reconciliation.

Over the years, more than 160 people have been indicted and some 80 trials conducted, featuring more than 5,000 witnesses offering often heart-wrenching accounts of the barbarity they lived through.

Supporters of the tribunal say that it is too early to tell what role the court records will provide in helping heal a still-divided region.

Wolfgang Petritsch, an Austrian diplomat who served as the U.N. High Representative in Bosnia and who still travels extensively in the region, said, “I’m rather pessimistic. All three countries maintain they were victims of the war and are promoting revisionist views, questioning the facts and their roles.”

He singled out Serbia for its failure to confront its past.

“Serbs never accepted they were the perpetrators,” he said. “They accept that killings happened during the war. But they do not want to be called a genocidal nation.”