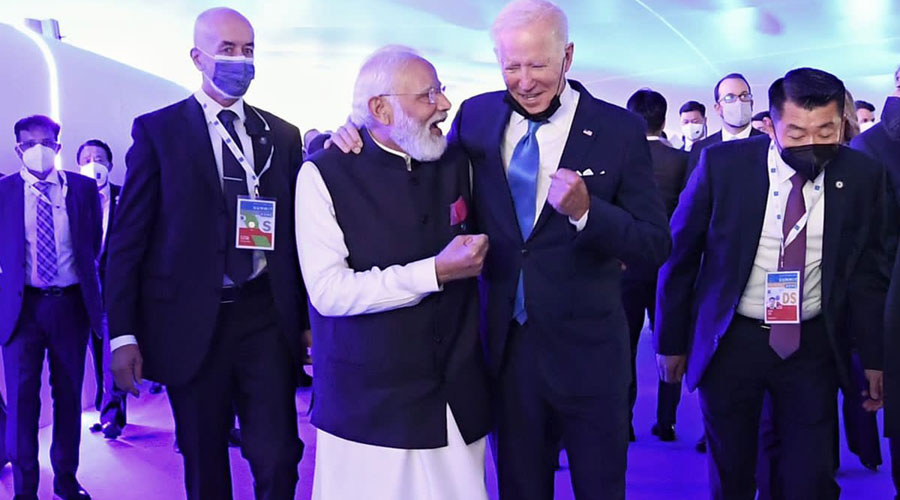 US President Joe Biden would travel to Japan for the second in-person Quad summit during which he would hold a bilateral meeting with Prime Minister Narendra Modi, his national security advisor said Wednesday.

Formed with Australia, India, Japan, and the United States, Quad was an initiative of the Trump Administration, which Biden has elevated to the leadership level. There have so far been three summits, two of them virtual.

"We believe that this summit will demonstrate both in substance and in vision that democracies can deliver and that these four nations working together will defend and uphold the principles of a free and open Indo-Pacific,"  US National Security Advisor Jake Sullivan told reporters during the daily White House news conference.

"While he's in Tokyo, Biden will also launch a new and ambitious economic initiative for the region, the Indo-Pacific Economic Framework (IPEF), which will be a 21st century economic arrangement, designed to tackle new economic challenges," he said.

"The framework," he said, "will involve work ranging from setting the rules of the digital economy to ensuring secure and resilient supply chains to managing the energy transition to investing in clean, modern high standards infrastructure."

Biden will be joined in person by the Prime Minister of Japan for the launch of IPEF and virtually by leaders from a number of Indo-Pacific partners from down under to southeast Asia to northeast Asia.

"On security and economics, on technology and energy, on investment in infrastructure, we think this trip is going to put on full display President Biden's Indo-Pacific strategy and that it will show in living colour that the United States can at once lead the free world in responding to Russia's war in Ukraine, and at the same time, chart a course for effective, principled American leadership and engagement in a region that will define much of the future of the 21st century," Sullivan said.

Before arriving in Japan, Biden is scheduled to travel to South Korea for a summit meeting with its leaders.

"The message we're trying to send on this trip is a message of an affirmative vision of what the world can look like if the democracies and open societies of the world stand together to shape the rules of the road to define the security architecture of the region to reinforce strong, powerful historic alliances," Sullivan said.

"We think putting that on display over four days bilaterally with the ROK and Japan through the Quad, through the Indo-Pacific economic framework, it will send a powerful message.

"We think that message will be heard everywhere. We think it will be heard in Beijing. But it is not a negative message and it's not targeted at any one country," he said.

"It's targeted at an audience the world over about what American leadership working flanked by allies and likeminded partners can deliver for people everywhere," he added.

"And we think we go into this trip very much with the wind at our back with a strong case to make that we have what it takes to be able to deliver against the security and economic challenges of our time," Sullivan added.

US: Voting for Green card applications