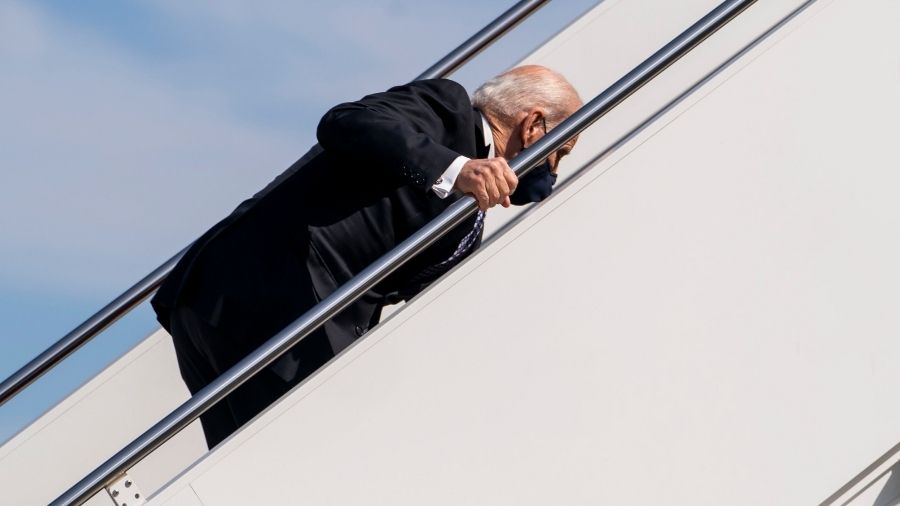 US President Joe Biden is doing "100% fine" after he tripped multiple times while jogging up the stairs to board Air Force One on Friday, according to a senior White House official.

Biden, 78, stumbled as he climbed the plane's steps, initially appearing to trip, get up, then trip a second time. He struggled to get up the second time for a brief moment, before making it up, turning to give a salute before entering the cabin.

"So, as you know, it's pretty windy outside, it's very windy. I almost fell coming up the steps myself," White House principal deputy press secretary Karine Jean-Pierre said while briefings reporters on the presidential plane on the way to Atlanta, Georgia where Biden was to meet members of the Asian-American community which has been shocked by a series of shootings in massage parlours.

Jean-Pierre would not say if he hurt the foot that was recently broken.

"He's doing great. All I can tell you is he's doing fine. He's preparing for the trip today and he is doing just great," she said in response to a question.

She repeated that he was doing just fine when asked if Biden got checked out by a doctor.

Biden had broken his foot in November, just after celebrating his 78th birthday and winning the race for the White House, making him the oldest president in US history.

Biden fractured his foot after he slipped while playing with his dog, Major. The Biden family has two dogs, Major and Champ, both German shepherds.

During the 2020 campaign, the Biden campaign released a summary of Biden's medical history, which showed the former vice president was healthy and fit for the presidency.