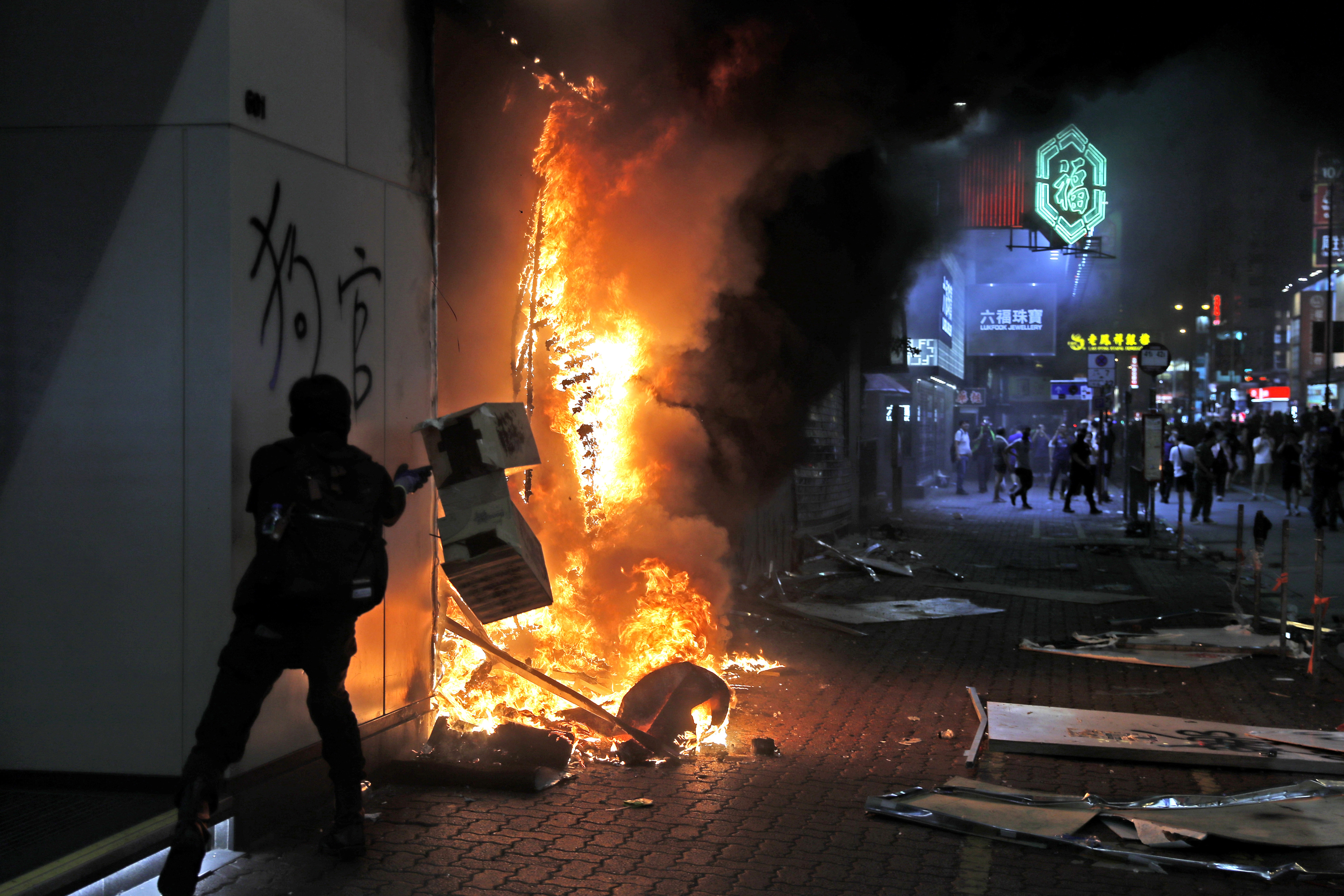 The police in Hong Kong fired tear gas and protesters set fires in a bank branch and subway entrances on Sunday, as tens of thousands of people protested despite an official ban on their activities and attacks on the march’s promoters.

The demonstration, which began peacefully before outbursts of vandalism and clashes between the police and protesters, was a display of continuing support for the months-long movement even in the face of increasing restrictions by the government.

The march, passing by some of the most iconic centres of Hong Kong’s South Asian community, also featured a call for solidarity with the city’s ethnic minorities.As violence escalates between demonstrators and the police in Hong Kong, protesters have started writing “last letters” to their loved ones, in case they don’t return.

Demonstrators, who started in Tsim Sha Tsui, a crowded commercial district on the southern tip of the Kowloon Peninsula, planned to march to West Kowloon, site of an arts district and a high-speed rail station that links the city to mainland China. They assembled along a promenade beside Victoria Harbor and chanted slogans while the protest anthem “Glory to Hong Kong” was played.The Hong Kong subway system, which has sustained widespread vandalism from protesters in recent weeks, closed stations near the march’s route.

Protesters broke windows in several stations on Sunday and painted graffiti over the protective barriers installed around the entryways. They also set fire to an entrance to the Mong Kok subway station and a Bank of China branch.Around 3.15pm, the police fired tear gas at protesters near the Tsim Sha Tsui police station. Shortly after that, some protesters threw firebombs into the station, briefly setting a tree alight.

The police also deployed a water canon truck that sprayed blue liquid apparently laced with an irritant on some protesters and journalists.The Civil Human Rights Front, the organiser of large, peaceful marches this summer it estimated were attended by up to two million people, applied to host the event on Sunday. But the police rejected the application, saying that such demonstrations have often been hijacked by vandalism and violence.

After that denial, the group backed out of hosting the march, but one of its leaders, Figo Chan, and other pro-democracy figures called on people to turn out anyway.

“I’m not afraid of arrest, of jail, of getting beaten up or gashed,” Chan said Sunday before the march. “But I hope people understand that to fight for democracy, freedom and justice, we must sacrifice. We use peaceful, rational and nonviolent means to express our demands. We are not afraid of arrest. What I fear most is everyone giving up on our principles.”

Another Civil Human Rights Front leader, Jimmy Sham, was attacked by men with hammers on Tuesday in Kowloon. Sham was released from a hospital, but was continuing to receive treatment and not able to attend the march, the group said.

That attack led to expressions of support for Hong Kong’s ethnic minority communities during the protest Sunday. Some unconfirmed reports said Sham’s attackers were paid South Asian men, and people in the protest movement said they were worried that could lead to retaliatory attacks.

Some demonstrators on Sunday stood outside the Kowloon Mosque and Islamic Center with signs calling on others to respect the building. “Be nice to religion,” one sign read.

As the police water canon moved past the mosque, its gate and steps were doused with a stinging blue liquid that officers sprayed at protesters holding signs outside.

“What can we say?” said Yaz Bhutta, a 28-year-old salesman, throwing his hands in exasperation after seeing the stained steps. “The police are crazy people, spraying chemicals at our mosque. This is where we come and worship every day.”

Picking up a broom, he brushed streams of the blue liquid into drains.

Kamil Kaka, who is from southern India and has lived in Hong Kong for more than a decade, said he was a little worried that protesters could target South Asians like him.

But Kaka, 32, said he thought Hong Kong people should have a right to protest, as he stood on a side street in Tsim Sha Tsui, watching demonstrators stream down the district’s main thoroughfare.

“People are fighting for their freedom,” Kaka said.

After the attack on Sham, another protest supporter was seriously injured in an assault on Saturday evening. A 19-year-old man was stabbed in the neck and abdomen near a subway station in northern Hong Kong as he distributed fliers calling on people to join the march. He is hospitalised in serious condition, the government said.

A 22-year-old man was arrested in the attack. The local news media quoted witnesses who said the attacker had shouted that Hong Kong was a part of China, and that protesters were damaging the city.

Chinese officials and the state news media have denounced the protests as a separatist movement.