After the latest climate activist action at the Barberini Museum in Potsdam, German museums are stepping up security measures to protect their collections 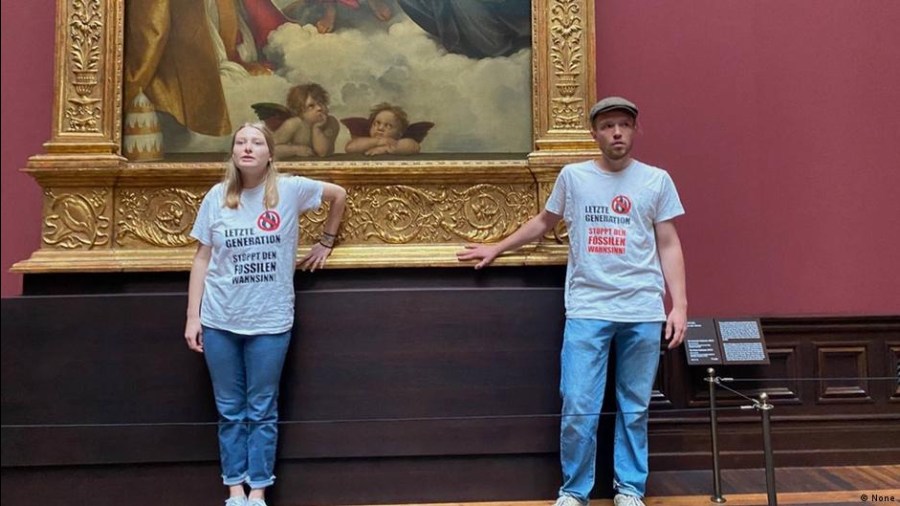 From the United Kingdom to Italy and Germany, climate activists have been attaching themselves to or attacking celebrated artworks to bring attention to their key demand: ending new gas and oil extraction projects.

Following unprecedented wildfires and the worst drought in centuries in Europe, activists say they want to better communicate the severity of the climate crisis and the need to end burning the fossil gas and oil that fuel it.

On October 14, two activists from the "Stop Oil" organization threw tomato soup at Van Gogh's famous "Sunflowers" at the National Gallery in London. In doing so, they asked the question, "What is worth more, art or life?" The painting's frame was damaged.

Though protected by a glass pane, the painting's historic frame was badly damaged and must now be restored. The museum has since released a statement that it will be closing its premises until October 30.

On Last Generation's website, Aimee von Baalen, the organization's spokesperson, classified the attack on Monet's painting as follows: "Monet loved nature and captured its unique and fragile beauty in his works. How can it be that so many are more afraid of damage to one of these images of reality than they are of the destruction of our world itself, whose magic Monet so admired?"

She added, "There will be no time for admiring art if we fight each other over food and water!"

This attack has caused outrage in the art world. The German Museums Association (DMB) spoke of an impending end to enjoying art and the exploitation of cultural assets. Museum founder and art patron Hasso Plattner, whose foundation runs the Museum Barberini, emphasized in an interview with the "Potsdamer Neuesten Nachrichten" that it would become "more difficult to impossible" to find lenders for exhibitions at that museum in the future.

The museum's first reaction, besides contacting the lenders of the current exhibition, was to increase security measures. "The attack on a work of the Hasso Plattner Collection, as well as previous attacks on works of art, including at the National Gallery in London, have shown that the high international security standards for the protection of artworks in the event of activist attacks are not sufficient and must be adapted," said Barberini Director Ortrud Westheider on Monday evening.

The security expert of the DMB and the Hasso Plattner Foundation, Remigiusz Plath, recommends glazing the artworks and deploying more staff.

But glazing of large formats is nearly impossible, he adds. Sometimes, only placing a glass pane in front of a painting is feasible, he noted. "And these measures, as well as more staff, cost a lot of money, and not all museums can afford that," says the expert. A work is only 100% safe if it's stored in a cellar.

The art of climate protest

He referred to particular paintings and sculptures that "make narrative sense and resonate with the climate crisis itself."

On July 1, UK activists glued themselves to the frame of J.M.W. Turner's 1809 romantic painting, "Tomson's Aeolian Harp," which portrays a bucolic outer London landscape around the Thames River that could be regularly flooded by 2030, according to climate experts.

The action at the Manchester Art Gallery included spray-painting the words "no new oil" on the floor.

"Symbolism is one of the ways humans have understood our world for tens of thousands of years," Bramwell said, referring to another July action where he and others affixed themselves to a copy of Leonardo da Vinci's "The Last Supper" at The Royal Academy in London.

"It is possibly one of the most iconic representations of Western values and spirituality," he said of the work. The painting also resonates with "crop failure" and the increasing malnutrition linked to climate change. "We have a whole generation for whom it may be the last supper," he said

This symbolism was highlighted when two members of Italian climate activist group Ultima Generazione (Last Generation) glued themselves to the ancient statue of the priest "Laocoon" at the Vatican Museums. The priest of Apollo in the city of Troy warned his fellow Trojans against taking in the wooden horse left by the Greeks outside the city gates.

But, as with the appeals of today's climate scientists, very few listened — and the city was destroyed.

"This statue reminds us of the sad story of the Greek priest that tried to save himself, his children and all citizens of Troy," said Laura, an Ultima Generazione activist. She added that their action was symbolic of a movement "united by the will of influencing our government to make the right choices in order to mitigate climate change."

Art actions have a long tradition

The exploitation of art to make a political statement has a long and often extreme tradition.

Bramwell refers to the art vandalism of a British suffragette who used a meat cleaver to slash a portrait of philosopher Thomas Carlyle in London in 1914 — and subsequently went to jail for her feminist culture action.

Just Stop Oil say they have a lot of "respect and love for art itself as an institution."

"We're not slashing paintings as the suffragettes have done," Bramwell said. What he calls "dissident and iconoclastic" actions are carefully planned to cause as little damage as possible to the targeted works.

The work was partly chosen because an art restorer advised Bramwell and his team that it had the requisite layers of paint and lacquer to withstand a light adhesive.

The painting was examined by the gallery's conservation team following the action. "'The Hay Wain' suffered minor damage to its frame and there was also some disruption to the surface of the varnish on the painting — both of which have now been successfully dealt with," a spokeswoman from the gallery told the Museums Association in the UK.

After Ultima Generazione activists glued their hands to the glass panel protecting Sandro Botticelli’s "Primavera" at the Uffizi Gallery in Florence on July 22, they said they had consulted with experts about a suitable glue. "It’s important for us to value art, instead of damaging it, like our governments do with the only planet," the group said in a statement.

German climate activists Letzte Generation (Last Generation) have also recently adopted the strategy throughout Germany, including on August 24 when two members glued their hands to the painting "Thunderscape With Pyramus and Thisbe" by Nicolas Poussin at the Städel Museum in Frankfurt.

"The painting today is symbolic of the destructive course of current politics," the group said in a statement. It depicts Pyramus lying on the ground with the sword next to him he used to tragically kill himself after making a wrong assumption about his lover.

This came a day after two Letzte Generation members affixed themselves to the frame of Raphael's "Sistine Madonna" in the Old Masters Picture Gallery in Dresden.

Letzte Generation activists then went on to glue themselves to a painting in Berlin's Gemäldegalerie, Cranach's "Rest on the Flight into Egypt," and Rubens' "Massacre of the Innocents" in Munich's Alte Pinakothek.

Olaf Zimmermann, the executive director of the German Cultural Council, was among the official voices condemning the actions.

"As much as I can understand the despair of the climate activists, I say clearly that the actions of sticking oneself to frames of famous works of art are clearly the wrong way to go," he said in a statement following the first two actions by Letzte Generation. "The risk of damaging the artworks is very high," he said.

"The works put in danger belong to the world cultural heritage and need to be protected as well as our climate," he added.

Indeed, the Munich museum reported that the frame of the Rubens painting was damaged through the action. "It is not legitimate to damage unique testimonies to humanity's culture to denounce given climatic problems," said Bernhard Maaz, the director general of the Bavarian State Painting Collections that manages the Alte Pinakothek.

"A painting like 'Massacre of the Innocents' as well its historic gilded frame have an invaluable cultural-historical value," added Maaz.

But Just Stop Oil's Simon Bramwell, who was a co-founder of the Extinction Rebellion climate activist movement, said it was time that the art world stand with the climate cause.

While major art institutions like the London's Tate gallery and the Van Gogh Museum in Amsterdam have refused sponsorships from fossil fuel companies such as BP and Shell in recent years, Just Stop Oil want deeper commitments — including a complete shutdown until governments promise to end new fossil fuel projects.

"Art institutions need to become the adults in the room," he said, referring to a lack of government action on the climate crisis.