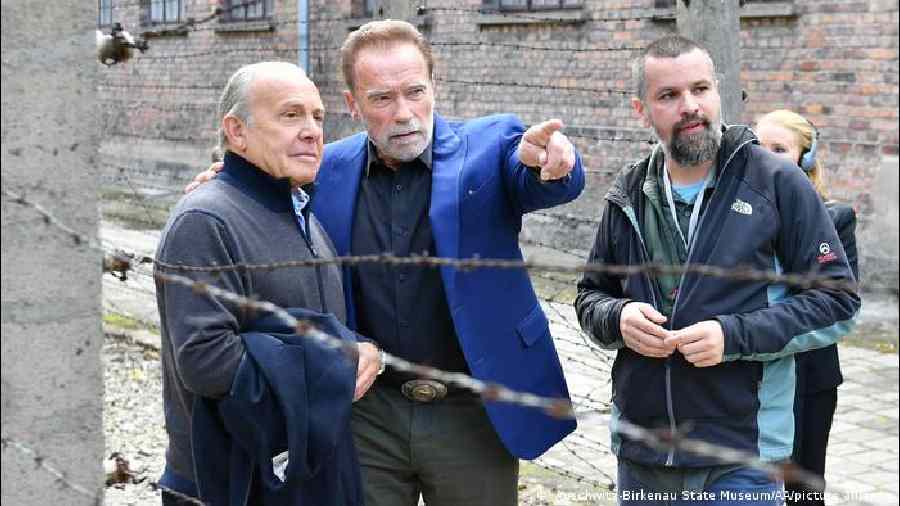 Hollywood star and ex-California Governor Arnold Schwarzenegger visited the former Nazi death camp at Auschwitz in Poland Wednesday as part of his effort to help stamp out hate.

The visit was linked to Schwarzenegger's work with the Auschwitz Jewish Center Foundation, whose mission is to fight hatred through education. Austria-born Schwarzenegger, now 75, recently received the foundation's inaugural "Fighting Hatred" award for his work in combating hate speech on social media.

The recipient of @AuschwitzJCF Award for Fighting Hatred @Schwarzenegger visited the @AuschwitzMuseum today to honor all the victims of the camp and deepen his knowledge about history that would help him fight against prejudices nowadays. pic.twitter.com/6tt6Nebela

Speaking alongside Auschwitz Jewish Center Foundation Chairman Simon Bergson, the son of Auschwitz survivors, Schwarzenegger said: "He was born after the Second World War to this wonderful Jewish family, and I was the son of a man who fought in the Nazi war and was a soldier. One generation later, here we are. ... We both fight prejudice and hatred and discrimination."

"Let's fight prejudice together — and let's just terminate it once and for all,'' Schwarzenegger said.

Bergson said: "Arnold and I are living proof that within one generation hatred can be shifted entirely. Governor, thank you for joining us here today."

Schwarzenegger and Bergson visited the exhibition at the Auschwitz Memorial Museum and placed candles at the camp's "Death Wall," where prisoners were lined up and shot.

Schwarzenegger also met Holocaust survivor Lidia Maksymowicz, who was a prisoner at the camp as a 3-year-old child. "People like her can help us to never stop telling that story about what happened here 80 years ago. ... This is a story that has to stay alive," he said.

Before leaving, Schwarzenegger told visitors that, although he had never been to Auschwitz before, he would certainly return, using his trademark line, "I'll be back."

In March, Schwarzenegger made headlines with a social media video addressed directly to the Russian people. In it, he warned them that they were being lied to by their president, Vladimir Putin.

He spoke of the deep trauma experienced by his own father after having served the Nazis and being similarly lied to, saying he returned home from the war a physically and emotionally broken man.

It is estimated that about 1.1 million people, mostly Jews, were murdered by the Nazis at Auschwitz from 1940 to 1945.