Anger as Picasso mural torn down in Oslo

Artwork removed from side of building facing demolition 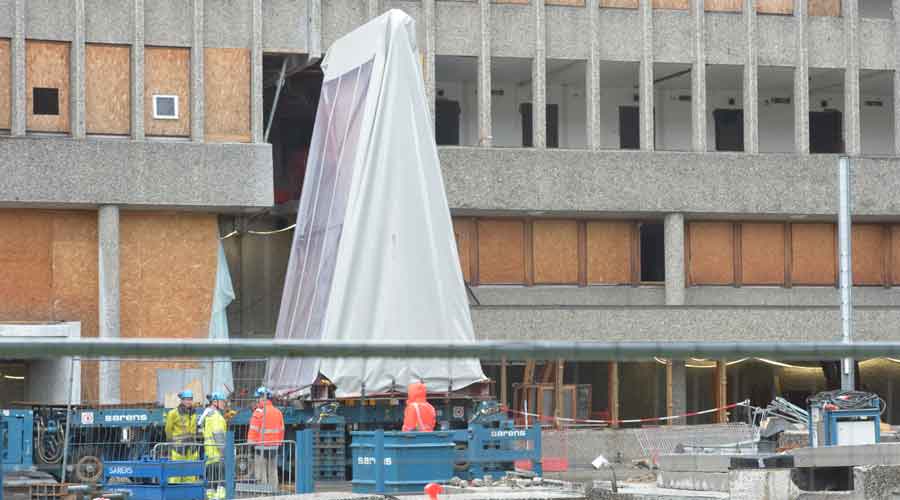 The artwork "seagull" by artists Pablo Picasso and Carl Nesjar is removed before demolition of the Y-block in the government quarter in Oslo, Norway, on Tuesday
AP
Thomas Rogers   |   New York   |   Published 01.08.20, 12:26 AM

Since the 1970s, Oslo’s modest government quarter has been dominated by a huge work of art: The Fishermen, a concrete mural by Pablo Picasso and the Norwegian artist Carl Nesjar that overlooks the district’s central square.

The mural, on the wall of a government building known as Y-Block, has long been one of Norway’s most high-profile pieces of public art. That is, until today.

To the outrage of preservationists, art-world figures and Nesjar’s daughter, the Norwegian authorities removed the work early on Thursday as part of plans to demolish Y-Block, which was damaged in a 2011 terrorist attack.

At noon on Thursday, a crane placed The Fishermen onto two trucks which drove it away for storage. The building’s other Picasso mural, The Seagull, was removed from inside on Tuesday. Both will eventually be incorporated into a building in a new government quarter planned for the site.The mural’s removal was the culmination of a years-long fight between the authorities, who argue the demolition is necessary for security reasons, and activists, who believe the decision represents a crime against Norwegian cultural heritage.

The fate of Picasso’s artworks has been in limbo since 2011, when the right-wing terrorist Anders Behring Breivik detonated a car bomb nearby, killing eight people and damaging the building. Breivik later murdered another 69 people, mostly teenagers, on an island near Oslo.

Despite protests against Y-Block’s planned demolition, the Norwegian authorities have insisted a vehicle tunnel running underneath the building poses a security risk, and that it is not safe for government business to take place inside.

Nesjar’s daughter, Gro Nesjar Greve, has launched a lawsuit together with the grandson of Erling Viksjo, Y-Block’s architect, to stop the government from repurposing the murals in the new quarter. She said that her father, who died in 2015, was distraught when he learned of the plans to relocate the mural. “This was his main life achievement, and they are just taking it down,” she said in a telephone interview.