Advertisement
Home / World / Fear, anger and the desire for retribution

Fear, anger and the desire for retribution

'The events of September 11, 2001, became the hinge on which all of recent American history would turn, rewriting global alliances, reorganizing the US government, and even changing the feel of daily life' 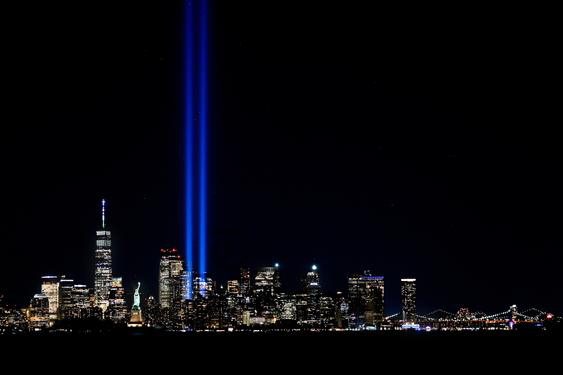 The Tribute in Light, an installation commemorating the September 11 attacks, in Lower Manhattan, on Friday, the eve of the 20th anniversary of the attacks.
(Chang W. Lee/The New York Times)
Paran Balakrishnan   |   New Delhi   |   Published 11.09.21, 09:39 AM

There are moments that define a generation. Ask any American who’s old enough where they were on November 22, 1963, when President John F. Kennedy was shot, and it will be a case of instant recall that leaps back across the years, dissolving decades.

The defining moment of the 21st century came at 8.46 am Eastern Standard Time (6.15 pm IST) when a plane sailed almost gracefully into the North Tower of New York’s very distinctive World Trade Center.

I remember vividly that I was at my desk when someone in front of a TV screen yelled, “Come and see this.” Another journalist colleague remembers watching in stunned disbelief as first one plane, and then a second plane, crashed into the landmark Twin Towers, shattering the calm of a sunny autumn morning. The shock gave way to action as he rapidly gave orders to put together the early editions of his newspaper that had to be ready by 8 pm. The photographs of the dreadful events hadn’t yet been flashed around the world, so he got a photographer to shoot images from the TV screen.

Even now, though, it’s tough to comprehend how traumatic 9/11 was for Americans. This was the first time ever that an enemy force had attacked Mainland America and killed large numbers of people -- in the case of the September 11 attacks 2,996 people were killed, including more than 400 emergency workers Of course, the Japanese attacked Pearl Harbor in 1941, killing more than 2,400 Americans. But don’t forget that Pearl Harbor is nearly 3,200km from the US mainland.

When the first plane hit the North Tower, Americans watching their TV screens thought some terrible accident might have taken place. Then, 17 minutes later, the second plane smashed into the South Tower. “When the first plane struck, I wondered if the pilot had died at the controls,” said one person. Then came the awful realisation the US was under attack. “First came fear. Who could it have been?” he recalled. He added: “That was swiftly replaced by anger and a feeling of they must pay for this.”

In the ensuing roller-coaster of emotions came the realisation that this had been an intricately planned attack aimed directly at disabling both the government and New York’s financial district, which could in some ways be called the country’s beating heart. Less than an hour later, American Airlines Flight 77 crashed into and brought down a part of the Pentagon. United Airlines Flight 93 crashed into a field outside Shanksville, Pennsylvania, after the passengers, who had heard about the earlier crashes, fought with the hijackers. We’ll never know if its target was the White House or the US Capitol.

The world was in shock for weeks after the attacks. President Vladimir Putin immediately called President George Bush Jr to offer all assistance in tracking down the culprits. The US quickly zeroed in on Osama bin Laden though we’ll never know what led them to him. Could it have been the fact that bin Laden’s tribal rival Ahmad Shah Massoud had been assassinated just two days before 9/11 that triggered their suspicions? Security analyst and journalist, Peter Bergen described the Massoud assassination by killers dispatched by bin Laden as “the curtain-raiser for the attacks on New York and Washington”.

Looking back, the events in the wake of 9/11 became almost predictable. America unleashed the global “war on terror” to defeat Al Qaeda and “every terrorist group of global reach” that mushroomed into the wars in Afghanistan and later Iraq (though Iraq was unconnected to 9/11). The US began within weeks bombing Taliban-ruled Afghanistan, aiming to flush out bin Laden. Unfortunately, the US reckoned without Osama’s greatest ally – Pakistan. The Pakistan Army was able to whisk many Taliban fighters out of Afghanistan before the Americans could get at them. And they also somehow managed to spirit Osama out from the Tora Bora caves.

Would the US have left Afghanistan if they had captured or killed bin Laden immediately? That question will have to remain in the realm of historical ‘What If’ parlour games (like what would have happened if the Germans had successfully invaded Britain?). Since they didn’t get their hands on him, they embarked on the longest war in US history. While they were hunting down bin Laden, they thought they would mould Afghanistan into a country that was more acceptable in Western eyes. Was the civilising mission beyond an army of occupation? Almost certainly. What also is certain is that the lives of many Afghans have suddenly changed for the worse with the chaotic exit of US forces.

How was India impacted by all these events in our region? Before 9/11, the US had leaned quite heavily on India for information about Al Qaeda and bin Laden. But once the Americans had arrived in force in Afghanistan, they needed Pakistan more than anyone else. Supplies had to land in Karachi and be transported to Kabul or other parts of Afghanistan. And Pakistan quickly learnt the carrot-and-stick approach of dealing with the Americans. They’d hand over a wanted terrorist anytime the Americans got really incensed with them. And they’d ambush a supply truck if the US squeezed them too tightly.

The US generals must have known the Pakistan Army was playing them. But they never, either due to lack of will, ability or both, effectively turned the tables on Pakistan. The US soldiers in the field certainly knew the Taliban frequently fled back to Pakistan after an attack.

There are many reports that the Pakistan Army would sometimes give covering fire as the Taliban scampered across the border. On one occasion, US soldiers fired back, resulting in the deaths of about 20 Pakistan soldiers. “Let me be clear. Many Americans died in Afghanistan because of Pakistan’s ISI,” said former US senator and naval reservist intelligence officer Mark Kirk, several years ago, after a trip to Afghanistan. Kirk suggested the US should tilt towards India and encourage us to play a bigger role in Afghanistan. Fortunately, that’s a temptation India has always resisted.

How was the Iraq attack to dislodge Saddam Hussein connected with the US quagmire in Afghanistan? Bush in his State of the Union address identified “an axis of evil” -- remember that phrase? -- of rogue states that supported terror and were developing weapons of mass destruction and Iraq was at the top of the list (though as we now know the Iraqis were not developing weapons of mass destruction). In the axis of evil were also Iran and North Korea. One way or another, the US fought in countries they should never have been in. While the US took its eye off the ball, the country that could really challenge its power was quietly rising: China.

Worse still, according to historian and journalist Garrett M. Graff in the Atlantic Weekly: “The events of September 11, 2001, became the hinge on which all of recent American history would turn, rewriting global alliances, reorganizing the US government, and even changing the feel of daily life.” He adds: “In an embrace of cynicism and realpolitik, we relied on allies – most notably, Egypt, Pakistan and Saudi Arabia – that made our fight more bloody and more costly.”

There’s no doubt that America’s capitulation to the Taliban and the handover of Afghanistan to the Islamist group is a humiliating conclusion to Bush’s “war on terror,” one that has no doubt heartened jihadists around the world. Bin Laden had tauntingly described the United States in an 1998 interview with the US network ABC as a “paper tiger.” For India, the Taliban comeback adds to the enormous security problems it’s already facing from Pakistan and China.

Still there can never be any questioning America's global influence. It has offered the world a vision of being a better place even if it often has not lived up to its high standards. "A shining city on a hill," was how President Ronald Reagan put it. Twenty years later "the shining city on a hill" looks badly tarnished and we are all the poorer for it.

Tom still carries 9/11 with him