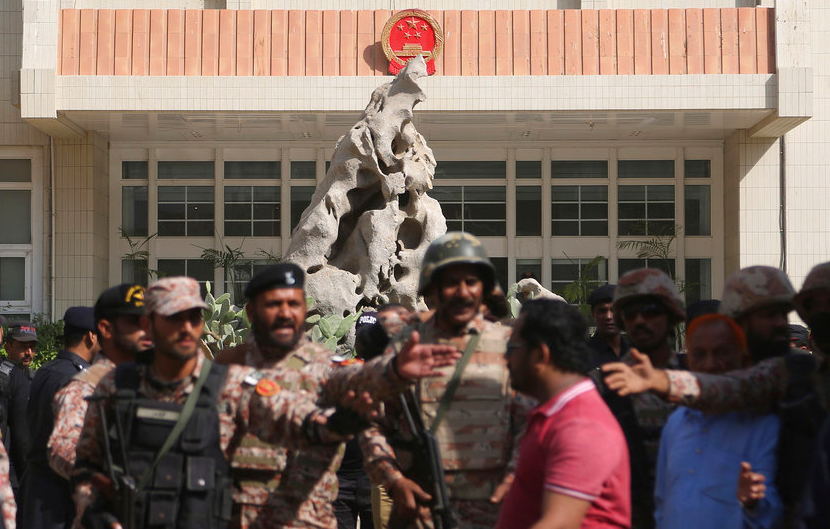 Three heavily-armed suicide bombers on Friday stormed the Chinese consulate in Karachi, killing four persons including two policemen, before being shot dead by security forces who foiled the daring attack in the high-security zone, authorities said.

The attack was claimed by the outlawed Baloch Liberation Army (BLA) which said it would not tolerate “any Chinese military expansionist endeavours on Baloch soil”.

The consulate, located in the posh Clifton area of Karachi, came under attack early on Friday morning.

The three bombers were killed before they could enter the facility as forces successfully foiled the attack, Karachi police chief Amir Shaikh said.

“Food supplies and medicines were also recovered from their possession,” officials said.

“We have received two dead bodies of policemen and an injured Chinese security guard who is under treatment,” said Seemi Jamali, the executive director at Jinnah Hospital. Two civilians, a father and his son, were also killed, officials said. The Sindh government and the Pakistan Army confirmed that three terrorists were killed in the operation.

The heavily-guarded E-Street neighbourhood is considered a red zone. It is home to a number of upscale restaurants, diplomatic missions and schools.

Schools and eateries were on lockdown until a clearing operation is completed.

Residents said they first heard firing and explosions around 9.30am (local time). “The terrorists first attacked the checkpost outside the consulate and detonated a hand grenade in the area,” Shaikh said.

He added that the attackers had parked their vehicle at some distance from the consulate before moving towards the building.

Defence analyst and security contractor Ikram Sehgal, whose company guards were posted at the consulate, said the attackers first engaged in an exchange of fire with the policemen.

After the cops and civilians were killed, Sehgal said, the attackers moved towards the gate of the consulate. However, the guards were quick to usher civilians and consular staff into the building and shut the gates behind them.

The paramilitary rangers then reached the spot and engaged the attackers, he said. Sheikh said that all Chinese staffers “are safe and secure”.

The BLA separatist group shared the photographs of the attackers.

“Karachi: Fidayeen of BLA attacked the Chinese embassy in Karachi,” it said in a tweet. BLA has been designated as a terrorist entity by Pakistan.

“The failed attack against the Chinese Consulate was clearly a reaction to the unprecedented trade agreements that resulted from our trip to China.

“The attack was intended to scare Chinese investors and undermine CPEC. These terrorists will not succeed,” Khan said.

Sindh Chief Minister Murad Ali Shah contacted the Chinese consul general and assured him that the situation will be taken under control.