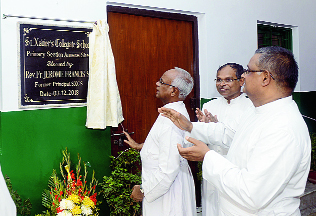 St Xavier’s Collegiate School aims to open a kindergarten section by 2020, acknowledging that the trend of early schooling is here to stay and that its decision to catch them younger might have come “a little late”.

Father Benny Thomas, principal of the Jesuit institution with a history spanning more than 150 years, said the addition of 16 rooms to the Wood Street campus was crucial to the plan to have a kindergarten section with 220 seats.

The admission process is likely to start in September 2019.

“The entry level in our school is currently Class I. We do have a preparatory class (one section with 40 students) that is reserved for Christians. But with 16 additional rooms being built, we will be able to invite many more students to our institution,” Thomas said.

The foundation ceremony for the proposed building was held on the Feast Day of Saint Francis Xavier.

St Xavier’s Collegiate School is among the last of the top Calcutta institutions to lower their entry level in keeping with the demand for kindergarten seats. In several schools, parents are ready to submit applications for admission soon after their children turn two.

Age eligibility for admission to Class I is five-plus. At St Xavier’s, there are around 1,400 applicants for 160 seats on an average.

While Montessori schools could be worried about losing more students, St Xavier’s is looking to be on a level playing field with the other top institutions.

“During interactions with applicants for admission every year, we spot a bunch of bright and talented kids. When we invite them to come to us, some stay put where they are because of the large amounts of money their parents would have already invested. If they had these admission opportunities the previous year, maybe they would have come and joined us,” principal Thomas said.

The target for completion of the annexe is 18 months.