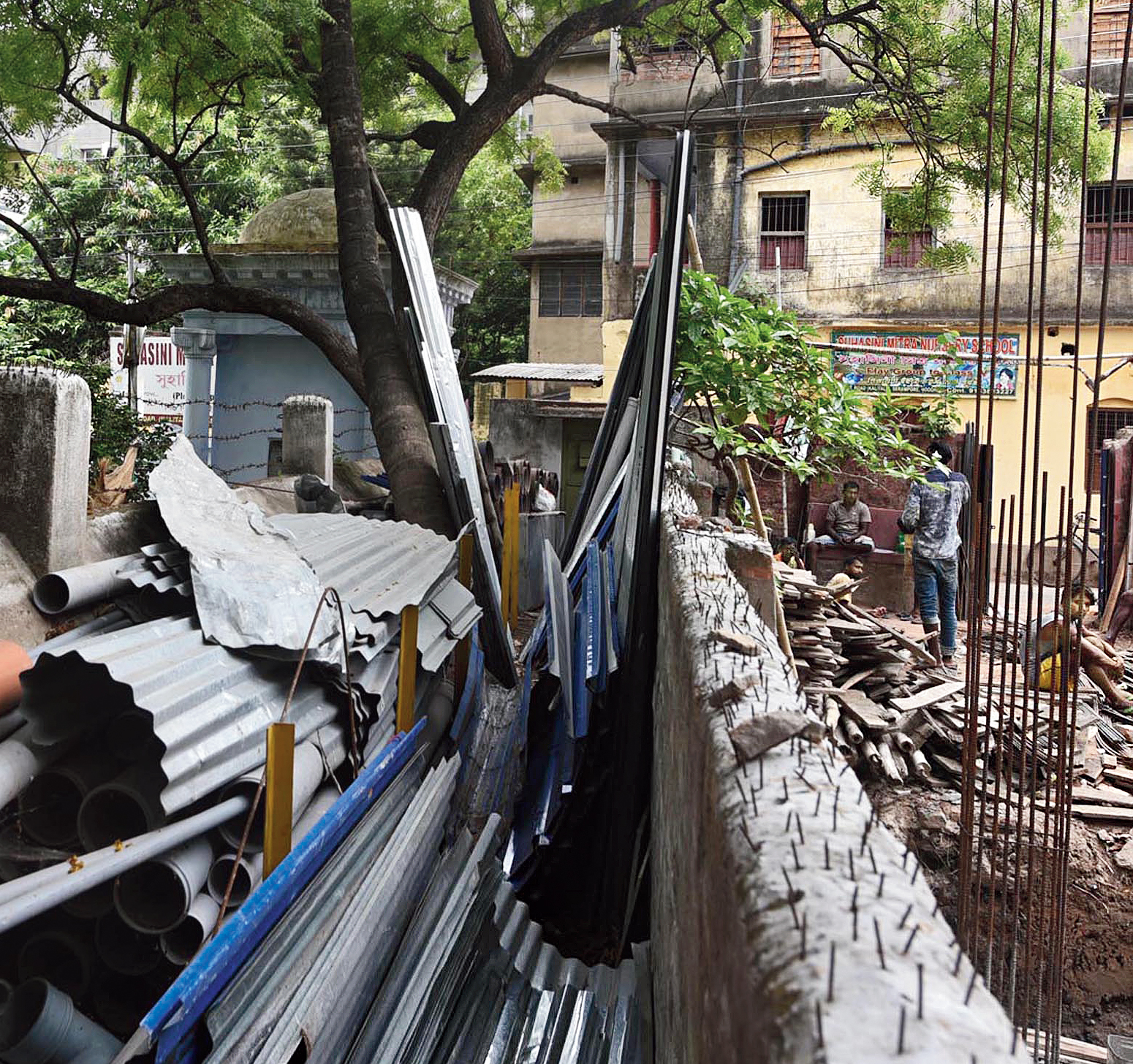 The passage along the wall of William Carey’s cemetery before it was cleared.
Picture courtesy Neline Mondal
Subhankar Chowdhury   |   Serampore(Hooghly)   |   Published 09.06.19, 07:51 PM

The passage after it was cleared.
Picture courtesy Neline Mondal

A local hardware shop owner said he had cleared on Saturday the passage, running parallel to the perimeter wall of William Carey’s cemetery in Serampore, of corrugated sheets and iron pipes.

The cemetery caretaker also confirmed on Sunday that goods of the hardware store stacked on the alleyway had been removed.

The Metro had highlighted on Saturday how the stored materials posed a threat to the safety of the wall.

A picture shared with Metro by Chandernagore resident Neline Mondal, who went to the cemetery on Sunday to pay tribute to Carey, the 18th century British missionary and educator,on the occasion of his death anniversary, suggested that the passage has been cleared.

Dina Mahato, the caretaker of the almost 200-years-old cemetery, said the corrugated sheets and iron pipes were removed from the passage over the past two days.

“The passage is almost clean now. Some of the items have been placed towards the wall of a vacant plot that runs parallel to the cemetery wall,” said Mahato, who has been guarding the cemetery for close to two decades.

Till Friday the passage measuring 5ft wide was so clogged with hardware items that the walkway could barely be spotted.

A wooden door that remained locked till Friday blocked one’s entry to the passage.

Dibyendu Dutta, who runs the hardware store on GT Road and lives in the house at the end of the passage between the construction site and the cemetery, used to stock his wares in the alleyway for lack of space in his shop.

“Although the entire passage is mine, I have removed the wares as it was being alleged that they were putting pressure on the cemetery’s perimeter wall,” Dibyendu told Metro on Sunday.

The local councillor, Rajib Dutta, said he had asked Dibyendu to clear the space at the earliest.

On Sunday, the walkway was distinctly visible. Mahato said the door had been opened to remove the goods.

“The danger to the cemetery’s perimeter wall came from the corrugated sheets and iron pipes that rested on it. The wall is sure to collapse if this goes on,” Neline had said on Friday.

Neline said she was relieved to see that the danger to the wall did not exist anymore.

“But what still pains me is the fact that the compound of the cemetery, spread over a parcel of land measuring a little more than two acres, is in a state of mess. As I placed a garland on William Carey tomb, I found that even it is not cleaned properly. Creepers and plants have eaten into the perimeter walls and except for a coat of white lime on the cemetery and portions of the boundary wall there is nothing to suggest anyone cares for the place,” she said.

“The wall could crumble because of lack of upkeep,” Neline added.

Mahato said the cleaning of the compound happens only on August 17, when teachers of Serampore College assemble at the cemetery on the occasion of Carey’s birth anniversary.

The Serampore College, which was founded by Carey on July 15, 1818, owns the cemetery.

Bidyut Banerjee the vice-principal of the college, told Metro: “I would speak to the college trustee and the Serampore municipality on putting up a signage and carrying out the cleaning of the compound on a regular basis.”

The cemetery, which lies in neglect with heavy overgrowth of shrubs and plants, is located on Brojo Dutta Lane, tucked off the foot of Serampore flyover that arches over the rail line and lands on another part of GT Road.

Carey was interred at the cemetery along with Joshua Marshman and Willam Ward — the formidable trio credited with sowing seeds of modern education in Bengal. The college is about 2km away from the cemetery, where the entire family of Carey is interred.

The college was all decked up when the bicentenary celebration was held in last December, but no one has even bothered to put up a signage on the entire Brojo Dutta lane to help one track where the cemetery is located.