The king’s men, the king’s promises

Identity politics of the heartland kind has arrived in Bengal this election season. It has triggered new aspiration and coaxed a shower of sops. Narrating the Rajbanshi story 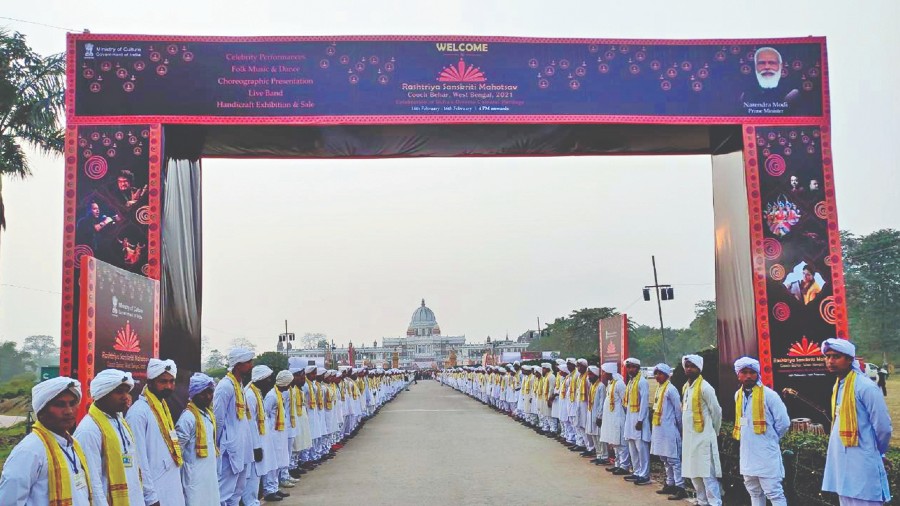 A battalion in the name of the erstwhile princely state of Cooch Behar in the central paramilitary forces, a Rs 500-crore cultural centre, a Rs 250-crore statue of social reformer Panchanan Barma. These were some of the things promised to the Rajbanshis by the Union home minister, Amit Shah. Trinamul boss and Bengal chief minister Mamata Banerjee announced the creation of a Narayani Battalion in the state police recently, constituted a development board for Nashya Sheikhs or Rajbanshi Muslims with eight members, announced several crores of grants for the Rajbanshi Language Academy, the Rajbanshi Development and Cultural Board and a second campus of the Panchanan Barma University. The rollout goes on and on.

The Rajbanshi identity is a many-layered thing. Ajit Adhikari, a schoolteacher in Cooch Behar, says, “The community has been divided into several groups at different points of time. Before Independence, the Rajbanshis lived in the princely state of Greater Cooch Behar. It comprised present-day Cooch Behar, parts of Rangpur (now in Bangladesh), parts of Assam, Bihar and Nepal.”

When India became independent, Cooch Behar wanted to join the Indian territory, not as a part of the state of West Bengal, but as a C-category state that would be directly under the central government. Says Adhikari, “That is mentioned in the chukti patra or condition of ascension to the Indian state. But that did not happen.”

The Rajbanshis are an indigenous people, Adivasis; they were also financially backward at the time of Independence. In the early 20th century, Panchanan Barma, one of the social reformers and intellectuals from within the community, led a social drive. Schoolteacher-cum-social activist Ratan Barma narrates how Panchanan Barma, his postgraduate degree in Sanskrit and an LLB notwithstanding, faced discrimination in British India. He was deliberately overlooked for the post of a sub-divisional administrative officer. Says Barma, “So he came up with his own theory that the Rajbanshis were actually ‘bratya Kshatriyas’ meaning Kshatriyas who had been intentionally kept aside by society. He asked people to adopt the sacred thread and take the position of Kshatriyas, who are believed to be right after Brahmins in the Hindu caste hierarchy.” 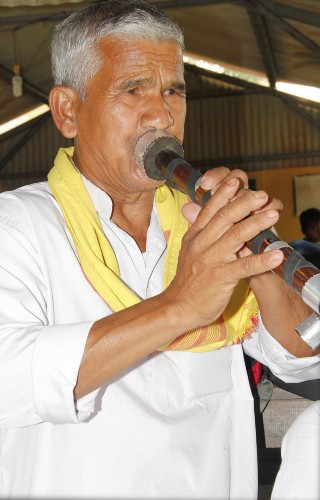 A member of the community plays the mukha banshi
Courtesy, David Roy

“It divided us in more ways,” says Adhikari. It seems a section of people wanted to be listed as Scheduled Tribes (ST).

So today, when community leaders Ananta Ray Maharaja and Bangshibadan Burman want themselves to be declared STs, the followers of Panchanan Barma do not like it. And a third category, those who got themselves an education and have earned a position in society, do not want to be listed as SCs or STs.

Cooch Behar went to the polls yesterday — 21 seats in all.

Despite promises aplenty, successive governments in Bengal did little for the Rajbanshis. Says Barma, “During the Congress era, many schools and colleges came up. It was not a government initiative though. Educated Rajbanshis donated land and so on, later the government took over these schools. But other than this, the four things that we Rajbanshis hold dear — bhasha, itihas, sanskriti, sahitya (language, history, culture and literature) — nothing noticeable happened in these fields during the Congress rule.”

Dipak Ray, who is the dean, faculty of arts, commerce and law of Raiganj University in North Dinajpur, talks about the Rajbanshis during the Left rule. He says, “Rajbanshis are chiefly farmers and their livelihood comes from the land. This was something that was not taken into consideration by the Left Front government.” He continues, “They have deprived us of many things. The Barga andolon or fight for land rights that was led by the CPI(M) did not address the natives of Cooch Behar.”

The Communist era was punctuated with people’s protests in the region. Says Barma, “It started with Hitasadhani Sabha, chiefly a civilians’ group that led a demand for good administration in the 1960s. It did not last long. In the 1970s, the Uttarkhanda andolan started. There was a demand for a separate state. Then in the 1990s, the Kamatapuri andolan was born. The demand for a separate state grew stronger, and this time 15 districts of Assam were also included. And in 1998-99, people like Ananta Maharaja and Bangshibadan Burman led the Greater Coochbehar Andolan. This is still going on.”

According to Ray, the ultimate proof of the CPI(M)’s indifference was the distribution of harmoniums among the tribal people of north Bengal in 2010. The harmonium was distributed among Garos, Oraons, Mundas, Malpaharias, and also the Rajbanshis. Ray says, “They are not aware of the culture of the tribes of Bengal. Rabhas and Bodos play the kham sandhrung, a kind of drum. And we, Rajbanshis, play the dotara, sarinda and byana.”

The Rajbanshis are also very proud of their language. Panchanan Barma was the first person to insist that Rajbanshi is a language distinct from Bengali. But most of the literature of the Rajbanshis was oral. “We have to document it and for that we need funds, we need patronage. We are trying hard to include Rajbanshi language under the Eighth Schedule of the Indian Constitution,” says Barma. Ray informs that when Mamata Banerjee came to power in 2011, she did open a university in the name of Panchanan Barma and also started two language academies — first came the Rajbanshi Bhasha Academy, next came the Kamatapuri Bhasha Academy — she has also announced the setting up of 200 Rajbanshi schools. “But,” says Barma, “Here too, there is a controversy. Kamatapuri and Rajbanshi are one and the same language. Many believe that a separate academy for Kamatapuri was not required.”

If the Trinamul did all this, the common grouse is also that it pandered to the local Muslim community so much that the Rajbanshis began to feel sidelined in their own land. “Be it land issues or employment, Muslims have been getting preferential treatment,” says Barma. And then, given its location on the Bangladesh border, Rajbanshis continue to face the consequence of a continuous process of infiltration. Once again, the ground opinion is that the Trinamul government did nothing to arrest this.

The BJP’s interest in the Rajbanshi community is relatively new. In 2019, addressing a rally in Cooch Behar, Prime Minister Narendra Modi said, “Didi is scared and frustrated. She backs anti-nationals. You trusted her too much but she betrayed your trust.” In all likelihood, a tangential reference to the infiltration issue. It has been two years and five Lok Sabha seat wins since then, and now once again home minister Amit Shah has promised to act on the old resolve.

But what is that realistic and basic demand Rajbanshis would hold one and all political parties to? Says Ratan Barma, “We want that the children of the soil should be given priority when it comes to employment. There should be 70 per cent reservation in government jobs for the original or indigenous people.”