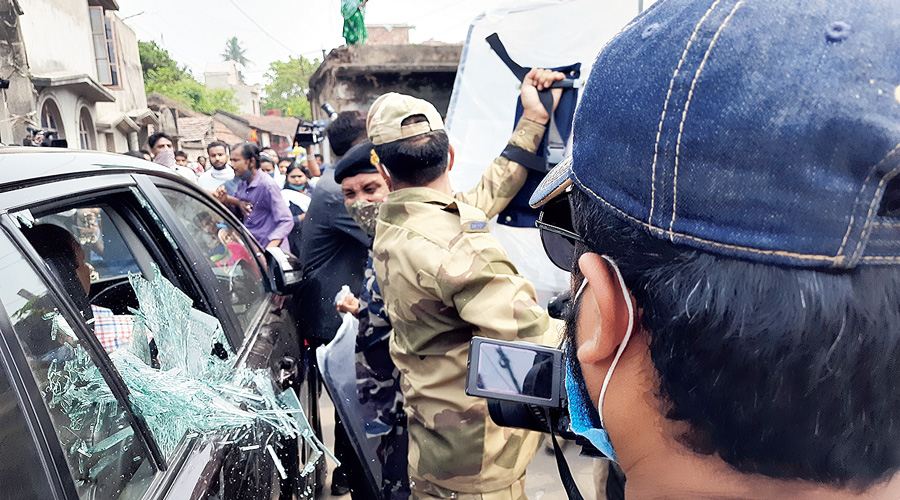 The fourth phase of Assembly polls in Bengal was marked by widespread violence with five persons losing their lives in two separate incidents in north Bengal, while scuffles with candidates and complaints of electoral malpractices were reported from elsewhere on Saturday.

The most violent phase of the polls also witnessed a lower voting percentage compared to the previous three phases. A total of 44 Assembly segments spread across five districts went to the polls on Saturday.

The day started with the death of Ananda Barman, an 18-year-old first-time voter. Barman died on the spot soon after casting his vote in the morning at a booth (5/285) in Cooch Behar’s Sitalkuchi after some unknown goons had opened fire.

Voters queue up to vote at a booth in Cooch Behar district.
Amit Kumar Karmakar and Main Uddin Chisti

The Trinamul Congress sent a memorandum demanding proper action against the central force jawans claiming the Sitalkuchi firing to be a classical instance of excess by them during the polls.

Amal Das, who is claimed to be a BJP supporter, was found hanging in Patlakhawa in Cooch Behar.

Although the BJP claimed he had first been murdered and then hanged by Trinamul-backed goons, district authorities said the matter was being probed and no direct link was established between the death and the elections.

Besides, BJP’s Kasba candidate Indranil Khan was injured when a group of people heckled him in front of a booth.

The BJP candidate from Chinsurah, Locket Chatterjee, was also heckled by a group of people allegedly backed by the Trinamul.

During the scuffle, the car of the candidate was damaged. Locket alleged that some people deployed to distribute hand sanitisers and gloves to the voters were influencing voters inside the booth to vote for the Trinamul Congress.

The car of another BJP candidate, Payel Sarkar, from Behala (East) was also ransacked at Haridevpur when she visited a booth. A car in the convoy of BJP’s Bally candidate, Baishali Dalmia, was ransacked near a booth in Liluah in Howrah.

There were complaints of electoral malpractices. A voter in the Jadavpur Assembly segment had to cast tender vote after he found that his had been cast in the morning.

At Kasba, the BJP and the CPM alleged that their election agents were driven out of some booths by Trinamul-backed goons.

The Indian Secular Front also alleged that its polling agents were prevented from entering the booths in some areas of Bhangar in South 24-Parganas.

In Howrah’s Domjur, BJP candidate Rajib Banerjee alleged that one of his polling agents had been driven out of the booth.

CPM’s Jadavpur candidate Sujan Chakraborty accused Trinamul of trying to disrupt the voting by threatening and throwing out polling agents of the CPM and other parties.

“At a booth in Jadavpur, Trinamul workers threw chilli powder in the eyes of our polling agent. They tried to provoke us but we kept our cool and ensured that polling agents stayed put till the end. We had complained about the incident to the Election Commission but they did nothing,” Chakraborty said.

The car of another CPM candidate, Mohd Salim, was attacked by alleged Trinamul goons at Chanditala in Hooghly. Salim was on his way to visit a polling station in his constituency when a group of Trinamul supporters rushed towards his car and slammed on its body, said a CPM leader in Hooghly.

The leader added that Salim had escaped unhurt.

Amid the violent incidents throughout the day, the polling percentage seemed to have taken a hit in the fourth phase of the polls.

“Although elections would continue till 6.30pm, it does not appear polling percentage would not touch 85 per cent mark, which was a common feature in the first three phases. Violent incidents could have left a mark on the voter turnout today (Saturday),” said a source.

Another official said as a number of Assembly segments where elections were held on Saturday are located in urban areas, the polling percentage was expected to go down.

“It had been seen in the past that polling percentage remains low in the urban areas. The violent incidents might have played a role, but the urban area factor should also be kept in mind while we say the voting percentage is lower in the current s phase,” added the official.

Sources in the Election Commission said more than 150 complaints were lodged by political parties during the day and all of those attended and required steps were initiated within 30 minutes in majority of the cases.