As the state votes, Malda and Murshidabad residents spoke about their despair, resentment and hopes 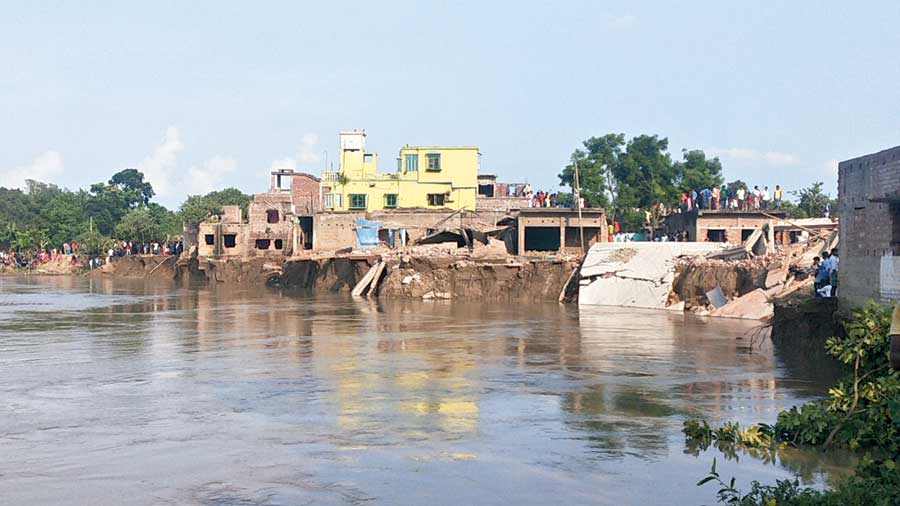 In 1927, Oscar Hammerstein II had penned Ol’ Man River. Set to tune by Jerome Kern and sung by Paul Robeson, the song became a milestone. Later, it inspired Bhupen Hazarika to write a song on another mighty river.

The song, which spoke about the pains, thoughts, lives and aspirations of people dwelling on the banks of the Ganga, still resonate in Malda and Murshidabad — located on the left and right banks of the river.

As Bengal votes, these residents spoke about their despair, resentment and hopes.

“Ganga gilchhe amader, bochorer por bochor (The Ganga is gobbling us up, year after year). We light lamps, we pray in temples and mosques, but nothing changes. Whether it is the house of a Hindu or a Muslim, she devours it all),” says Bishu Mondal, a resident of Manikchak in Malda, the block through which the Ganga enters Bengal from Jharkhand.

Over the years in Malda, the river has changed the geography of three blocks. Similar is the situation on the other bank, where seven blocks starting from Samserganj in the west have been affected by continuous erosion.

“It is not only a question of land. The lives of thousands of people have been doomed. Affluent families who owned houses, mango plantations and agricultural fields have become penniless overnight. Many of them, like me, now live in small huts built on government land and work as daily labourers,” says Golam Hossain, a resident of Panchanandapur that is under the Mothabari Assembly seat in Malda.

Asina Khatun, an 18-year-old resident of Manikchak, has had to give up studies because the Ganga has swallowed her school.

“No new school was built.

I had to quit studies. We need to travel 5km to collect ration. Is this development? There hasn’t been an inch of progress in our area and people who had indulged in corruption are now switching parties. We don’t protest as we have to live and survive here,” she says.

The affected residents point out that even Swadhin Sarkar, the BJP MLA of Baishnabnagar, the Malda block through which the Ganga enters Bangladesh, is a victim of erosion.

“The river destroyed his house a few years ago,” says Minati Mondal, a Baishnabnagar resident.

In Malda, the Ganga moves along a stretch of 180km from west to east, covering four blocks.

In Murshidabad, it flows along a distance of 105km through seven blocks.

The residents who bear the brunt of the river’s fury allege that there is complete silence in the power corridors of Delhi. The Narendra Modi government that has taken up the National Mission for Clean Ganga, often referred to as the “Namami Gange” campaign, seems to have forgotten about those who live on the banks of the river, the residents complain.

“We are no better than refugees…. Every year, hundreds of people on both banks lose their land and homes. Yet, no initiative is being taken by the central government. The Prime Minister speaks about keeping the Ganga clean, takes boat rides in Varanasi but seems to be oblivious of the distress that we face here in the downstream of the river,” says Amzad Ali, a resident of Samserganj, one of the affected districts of Murshidabad.

In Samserganj, two villages have been completely eroded by the river, forcing hundreds of residents to shift to other places.

They say no comprehensive plan has been drawn up to arrest the erosion. “Occasionally, the Farakka Barrage Authority carries out some anti-erosion work, and so does the state irrigation department. There is no concrete plan,” says Bishu Choudhury, a Baishnabnagar resident.

Residents say the political parties have not shown much interest in improving their lot. The Congress, which still considers Malda and Murshidabad its bastions, is busy retaining its support base. Trinamul is diligently trying to prove that it has carried out an array of development projects while the BJP is polarising voters, the residents say.

“It is shocking to see that there is no specific plan for the rehabilitation of the erosion victims. A handful of people who get lucky receive land or a house under some government scheme. The rest of us have to fend for ourselves. Landlosers are offered employment or financial assistance for projects but we don’t have any such option. We have supported various parties but our situation has not changed,” says Sanjay Majhi, a resident of Jalangi, another block in Murshidabad.

The locals say that although the BJP has elaborated how it intends to develop Gangasagar, revive the Adi Ganga in Calcutta and improve riverfronts in Howrah, it has been silent on developing the banks of the river.

The BJP leadership on both banks of the Ganga admit that no major work has been done but try to pass the buck on to the state government.

“It is true that a lot needs to be done. Over the years, the Centre has devised multiple plans but the benefits did not reach the people because of the state government,” says Manik Sarkar, a BJP district general secretary of the Murshidabad (north) committee.

Sreerupa Mitra Choudhury, a BJP Kisan Morcha leader who is contesting elections from Malda, claims that a couple of months ago, central water resources minister Gajendra Singh Shekhwat had taken stock of the situation in Baishnabnagar and held meetings with Farakka Barrage Project (FBP) authorities.

“But Trinamul should tell the public why erosion haunts the lives of the people at Mothabari, Manikchak and Ratua where the FBP has nothing to do and anti-erosion measures are to be taken by the state irrigation department,” she says.

What can be done

Even amid the despair, hope lingers among the residents, thousands of whom are dependant on the river.

From fishermen to farmers, people make a living because of the Ganga, which has blessed them with fish, vegetables and crops in abundance. “The fertile silt deposits of the river largely help the farmers,” says Hariswami Das, a schoolteacher in Baishnabnagar.

According to river experts, improvement in infrastructure like construction of safe riverine ports for steamers, fishery projects and regular cruise services along the Ganga can improve the situation.

“Along with specific plans to check erosion, development of such infrastructure can boost economic activities and help those who have lost land,” says Tuhin Subhra Mondal, a river expert.

The Ganga, considered sacred by Hindus, is an epitome of amity in Bengal.

Unlike most states upstream, the majority of the people who depend on the river in Malda and Murshidabad are Muslims.

This is because in both districts, the minorities form over half of the population and the majority of them live in blocks through which the Ganga passes.

“The Ganga is our life source, our mother, our source of livelihood,” says Mohammad Liaquat, a Jalangi resident.

For generations, Ali’s family has been dependant on the Ganga, whether it is for a pot of water to cook rice or for fishing or other daily chores.

This message of inclusiveness needs to be emphasised, social researchers believe, at a time the BJP has been trying to use the Ganga as a religious agenda to reap political dividends.

“This is something amazing here in Bengal and is in consonance with the rich legacy of amity that the state has upheld for decades. People here share their distress and aspirations together, cutting across religious lines,” says Soumen Nag, a social researcher in Siliguri.