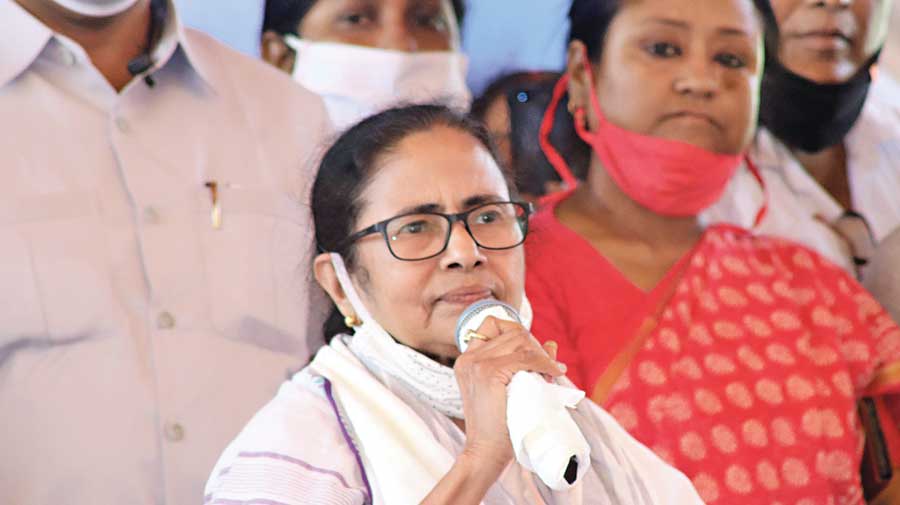 Chief minister Mamata Banerjee on Saturday accused the BJP of funding Muslim leaders from the state and outside to split the community’s vote bank for political gains in the ongoing Assembly elections.

Without naming the Indian Secular Front (ISF) chief Abbas Siddiqui and AIMIM chief Asaduddin Owaisi, Mamata alleged that the BJP was spending crores to use these parties to split the Muslim vote. She appealed to the community not to be influenced by them at all.

Her concern about the possible split in her Muslim support base became evident in her speeches in Muslim-dominated Raidighi and Kulpi in South 24-Parganas.

“A friend of the BJP has come from Hyderabad (Owaisi). They have also engaged a youth from Furfura (Sharif). They have joined hands...BJP is spending crores of rupees on them. They are trying to divide the minority community. Do not support them...Voting for them will mean voting for the BJP,” she said in Kulpi.

ISF chief Siddiqui has been drawing huge crowds, particularly Muslim youths, in the election rallies of the Sanjukta Morcha, outshining that of Trinamul and the BJP. Trinamul initially did not pay much importance to Siddiqui but after he joined hands with the Left Front and Congress to form Sanjukta Morcha, the situation markedly changed.

Siddiqui has influence in Hooghly, Nadia, and the North and South 24-Parganas. Trinamul’s concern is with 26 seats in Muslim-dominated rural belt of south Bengal where the Sanjukta Morcha is riding on Siddiqui’s popularity. Trinamul is also worried about the presence of the AIMIM in Murshidabad and Malda.

Trinamul insiders acknowledged the huge gathering in the Morcha rallies and activities of Owaisi’s followers in Malda and Murshidabad had become a matter of concern, which Mamata made clear in her back-to-back speeches in Raidighi and Kulpi.

“We have around 31 per cent Muslim voters in the state, who are actually the deciding factor in some 100 seats. In 2011 and 2016, most Muslims backed the Trinamul. But such consolidation of Muslim votes appears difficult this time as both the ISF and the AIMIM are likely to eat into our support base among Muslims. This will hit us hard as the BJP is trying to consolidate Hindu votes by polarisation,” a senior Trinamul leader said. “Mamata Banerjee is quite aware that a significant split in the Muslim vote could shatter her hopes of retaining power.”

Her concern became obvious in her speech in Kulpi, when she reminded Muslims that because of a split in their votes, the united battle against BJP in Bihar polls was failed.

“Don’t allow anyone to split your votes....it will only benefit the BJP. We (the Opposition) lost the Bihar election this way. I will not allow that in Bengal," she said, asking people to vow not to vote for any party except Trinamul. “This will help the Muslims and Hindus to survive, as well as the culture of Bengal,”she said.

Mamata in Kulpi also alleged the BJP was paying people to attend their rallies. “Just because they give me Rs 500, will I go to listen to Amit Shah’s meeting? His hands are dripping with riot’s blood, blood is dripping out of his eyes. Chhi! Chhi! Chhi! Which Bengal am I looking at?” Mamata said.

Mamata on Saturday said she did not give ticket to former Raidighi MLA and actress Debashree Roy as there was anger against her among the people. Trinamul also fielded Musaraf Hussain, son of former Congress MLA Motahar Hossain, from Muraroi in Birbhum, replacing its present MLA Abdur Rahaman tested Covid positive.