Amit Shah and J.P. Nadda promise a safer Bengal for women while chief minister Mamata Banerjee asks why the BJP was silent over Hathras 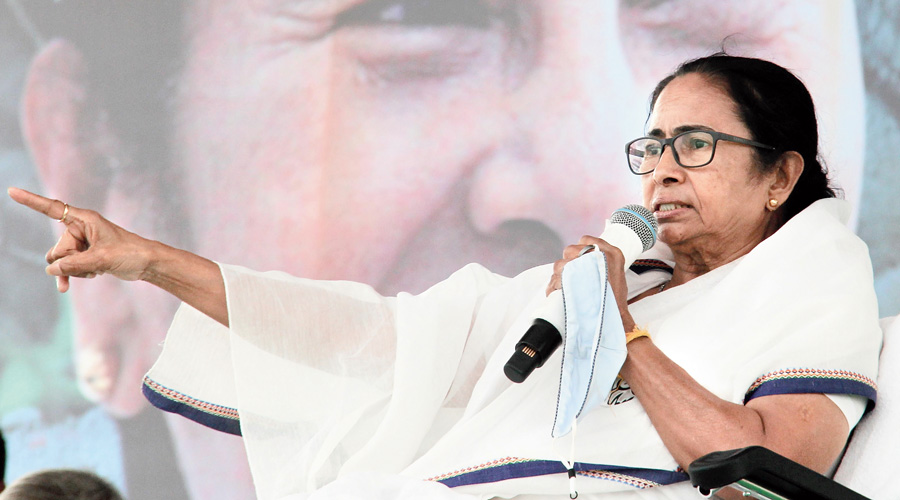 Shova Majumdar, the octogenarian mother of a BJP worker in Nimta of North 24-Parganas, on Monday died of month-long injuries allegedly at the hands of Trinamul goons, her death prompting Union home minister Amit Shah and BJP national president J.P. Nadda to promise a safer Bengal for women and chief minister Mamata Banerjee to ask why the BJP was silent over Hathras.

Anguished over the demise of Bengal’s daughter Shova Majumdar ji, who was brutally beaten by TMC goons.

Echoing Shah’s words Nadda also took to Twitter. “I pray for peace for the soul of Nimta’s old mother Shova Majumdar. She had to give her life because (her) son Gopal Majumdar is a BJP worker. BJP will always remember this sacrifice. She was also Bengal’s ‘mother’ and Bengal’s ‘daughter’. BJP will always fight for the security of Bengal’s mothers and daughters,” Nadda tweeted.

The use of the words “mother” and “daughter” in the posts appeared to be a direct jibe at Mamata’s poll slogan, “Bengal only wants its own daughter”.

Mamata, at a poll rally in her constituency Nandigram, reacted to Shah’s tweet by reminding him of atrocities against women in other states, especially those ruled by the BJP.

“I condemn any attack on women...I cannot digest attacks on mothers and sisters. Some people are raising questions about our Bengal...I would like to ask them what is the condition of women in states like Uttar Pradesh, Delhi, Rajasthan? How far are they safer there? Where were you when the Hathras incident occurred? Did you close your lips with leucoplast?” Mamata said.

Allegations against Trinamul were refuted by her party colleagues Saugata Roy and Partha Chatterjee.

“The BJP is trying to encash on the death. The woman’s death has nothing to do with politics,” Roy said.

Chatterjee added the clash was the result of a family issue. “There was no political angle. The woman died of old-age ailments.”

On February 26, Shova and her son Gopal were allegedly assaulted by Trinamul activists at their home under ward 4 of North Dumdum Municipality.

The BJP claimed Gopal was attacked because he was key to developing the party organisation in the area, and Shova was injured when she tried to save her son from attackers. “She was punched on her face and also beaten with sticks...” said a relative.

Nimta police are investigating the case. A group of BJP workers, led by BJP’s general secretary Sayantan Basu, demonstrated in front of the Nimta police station demanding the arrest of goons.

Archana Majumdar, the BJP’s North Dumdum candidate, visited the family on Monday and alleged the doctor called in to write Shova’s death certificate was “threatened” to fudge it.

As Archana is a doctor, she signed the death certificate, she said.

A delegation from the BJP Bengal women’s wing called upon governor Jagdeep Dhankhar on this issue. They demanded charges against the accused in the FIR include section 302 of IPC (punishment for the offence of murder) and that the matter be moved to and tried at a Fast Track court.