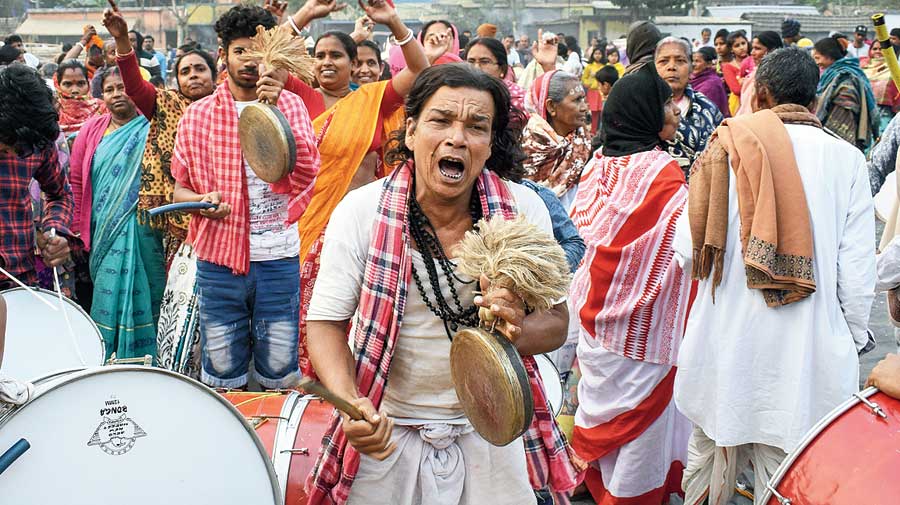 Krishna Kirtania, a resident of North 24-Parganas’ Gaighata, is unsure about whom to vote.

A member of the Matua community, Krishna had voted the BJP — like most others in his community — in the 2019 Lok Sabha polls. Early on Sunday, Krishna visited Thakurbari, the headquarters of the Matua sect in North 24-Parganas’ Thakurnagar, in search of clarity.

He spoke through the day with both factions of the Thakur family — one owing allegiance to Trinamul and the other to the BJP. The members of the family are direct descendants of Harichand Thakur, the founder of the Matua sect. The area votes on April 22.

In 2019, Krishna and nearly the entire Matua community had been sure that the BJP would solve their problems over Indian citizenship. The community had helped the BJP to win two crucial seats in the Matua-dominated constituencies of Bongaon and Ranaghat.

When the Narendra Modi government introduced the contentious Citizenship Amendment Act, the Matuas had thought their problems would finally be solved. Things, however, have changed in the last 21 months as these lower-caste Hindu refugees from Bangladesh await the implementation of the CAA, but there is no clarity on when it would be done.

The uncertainty over the CAA’s future, combined with the continuous efforts of the Trinamul Congress and other political parties as well as apolitical outfits to call the BJP’s apparent bluff has worked to a certain extent. The Matuas seem to be a divided house.

A source claimed that multiple factors, especially the confusion over the BJP’s true intentions regarding the implementation of the CAA, had alienated a section of the Matuas from the party.

“In 2019, almost 100 per cent of the 50 lakh-odd Matuas had voted the BJP. This time the number will be lower,” said the source in the All India Matua Mahasangha, an apolitical platform of the community that’s headed by Bongaon BJP MP Shantanu Thakur.

For people like Krishna, a major concern is the exclusion of the 15 lakh Bengali-speaking people in Assam from the National Register of Citizens. The NRC drive in Assam and its outcome — an issue Trinamul has highlighted in its poll campaign — has caused a degree of scepticism among the Matuas about document-based citizenship.

“Yes, it is true that some of our people feared that they would be delisted if they failed to show documents because most of them don’t have papers dating back to the time of their immigration. It is practically impossible,” said Mohitosh Baidya, the general secretary of the Mahasangha.

However, Baidya added: “We’ve held several meetings with our people at the ground level. We explained to them that the NRC and the CAA are different. The clause for the NRC in Assam was specific to the Assam tripartite agreement. In Bengal, the issue is different and all of us will be given citizenship.” He said the Matuas would vote for the BJP again.

The Matua movement began when the CAA of 2003 put forth “illegal migrant” as a category within the legal framework of Indian citizenship. Under the provisions of this Act, lower caste Hindus like Namasudras, who had migrated from Bangladesh after 1971 or were born in India to migrant Bangladeshi parents, became vulnerable to possible disenfranchisement.

The Act eventually became an ostensible trap to detain or arrest Bangladeshi refugees as “illegal migrants”. The deletion of the names of about 15 lakh Bengali-speaking people in Assam was also a result of the Act.

Left-leaning economist Prasenjit Bose, who has been trying to convince the Matuas about the fallacy of the citizenship tripod, said the main problems began with the 2003 amendment.

“This is the notorious Act which neither the BJP has withdrawn so far, nor Trinamul has ever raised its voice against in their endeavour to win the hearts of the Matuas. Both parties are basically cheating the Matuas,” he said.

Bose and his team have organised several meetings in Matua-dominated areas in Nadia and North 24-Paragans to convince people that they are citizens of India and the BJP has been trying to use them by dangling the citizenship carrot only for political gains.

According to him, the response of the people is an indication that the Matuas are finally realising that the BJP has taken them for a ride.

Bose may blame both the BJP and Trinamul for the confusion, but for the Matuas the choice is between these two.

Biman Biswas, 46, who claims to be a member of the All India Matua Mahasangha, said: “I am yet to decide who to vote for. The BJP has assured us citizenship. But so far it has delivered nothing. They have not even said that the provisions of the 2003 citizenship Act will be removed. If the categorisation of illegal migrants remains in the Act, many people will be trapped and detained since they will not be able to submit documents either in support of religious persecution or about their stay here.”

What has added to the woes of the Matuas is the delay in the framing of CAA rules. The Act came into being in December 2019. In March 2021, the government was allowed an extension till July 9, 2021, for the framing of the rules.

Trinamul is trying to use the loopholes in the BJP narrative to regain ground among the Matuas.

Leaders like Jyotipriya Mallick, Saugata Roy and Bratya Basu have in the past few months invested considerable time trying to regain the faith of the Matuas. Mamata Banerjee herself has addressed the community and has tried to convince them that since they are already residing in the state, they wouldn’t need new proof of citizenship.

“We believe we have been able to win back a substantial portion of the Matua people. I have myself explained to them that the BJP is basically a Manuvaadi party and in their scheme of things there is no place for Dalits like the Matuas…. We’ve exposed the BJP’s lies,” said Basu, adding that his party was confident of winning several seats in Matua-dominated areas.

There are at least 30 seats in North 24-Parganas and adjacent Nadia where the Matuas wield influence. In 17 of these seats, the Matuas make up around 45 per cent of the electorate. Ten of the seats are in North 24-Parganas while the remaining seven are in Nadia, which are part of the Bongaon and Ranaghat Lok Sabha constituencies.

All these seats were a strong support base of Trinamul until the 2019 Lok Sabha elections. But in most Matua-dominated segments such as Bongaon North, Bongaon South, Gaighata, Bagda, Habra, Haringhata, Kalyani, Ranaghat South, Ranaghat Northeast, Ranaghat Northwest, Krishnaganj and Chakdaha, Trinamul miserably lost to the BJP.

Minister Mullick said: “Our defeat margins don’t present the real picture. It was a sudden obsession that a large section of the Matuas had shown for the BJP for a wrong cause. Such obsession never lasts long. There will be a different story on April 22 when these Assembly segments will go to the polls.”