Ever since elections started, he has remarked on the probable number of seats his party has won in each phase, which other parties have called a mindgame 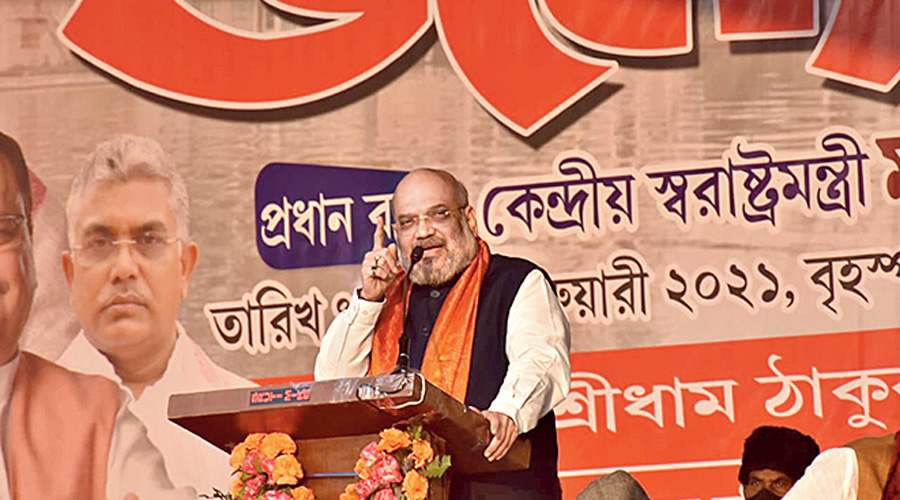 Union home minister Amit Shah on Thursday played the polarisation card in his poll campaign in South Dinajpur, a district that shares borders with Bangladesh, and has a substantial minority population.

“Mamata Banerjee keeps on labelling me and the Prime Minister’s ‘outsiders’. We want to know from common people whether we are outsiders or Indians. She has tried to build this narrative to retain her vote bank…the same reason why she is against the CAA,” the home minister said at a public meeting in Buniadpur (under Harirampur Assembly seat) of the district.

Shah also claimed that after the sixth phase of polls — held in 43 seats on Thursday — the BJP touched the majority mark in Bengal Assembly.

Ever since elections started in Bengal, Shah has remarked on the probable number of seats his party has won in each phase, which other parties have called a mindgame.

“After the fifth phase, we said the BJP will win 122 seats (out of 180). Now that the sixth phase of polling is being held today, we will touch the majority mark (148 seats). However, the remaining two phases (71 seats) are equally important to us as we want to secure 200 seats or more,” he said.

The home minister also spoke certain regional issues and old demands, such as opening of the Tentulia corridor through Bangladesh to cut the distance among north Bengal districts and between the Indian mainland by around 85km.

According to the proposal, the route would move through a 4km stretch through Tentulia of Bangladesh.

“We will work on the demand to open the Tentulia corridor. It will connect Chopra (in North Dinajpur) with Jalpaiguri district,” said Shah.