Bengal polls 2021: 10 rallies in a day in Covid-hit Murshidabad

On April 1,the district had only 90 active cases which shot up to 2,093 by Tuesday, with 389 new infections detected in the district in the past 24 hours till 9am 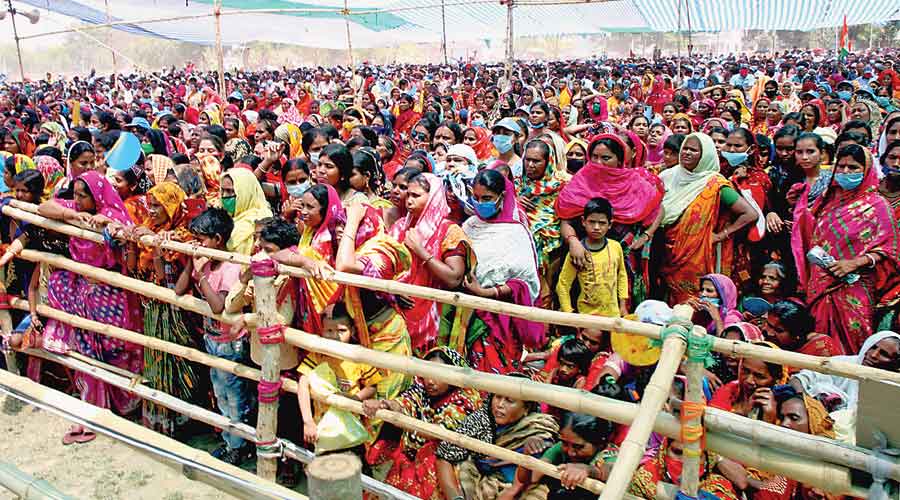 Poll-bound Murshidabad was carpet-bombed with crowd-puller events by both Trinamul and the BJP on Tuesday despite the recent surge in Covid-19 infections in the district.

Caution seems to have fallen on deaf ears in the district, going by the number of rallies and Covid infections. On April 1, Murshidabad had only 90 active cases. That number shot up to 2,093 by Tuesday, with 389 new infections detected in the district in the past 24 hours till 9am.

Despite this scenario, and all the promises by political leaders amid safety concerns, the key players of the election are yet to withdraw from poll campaigns with scant regard for basic Covid-19 safety protocols such as social distancing. 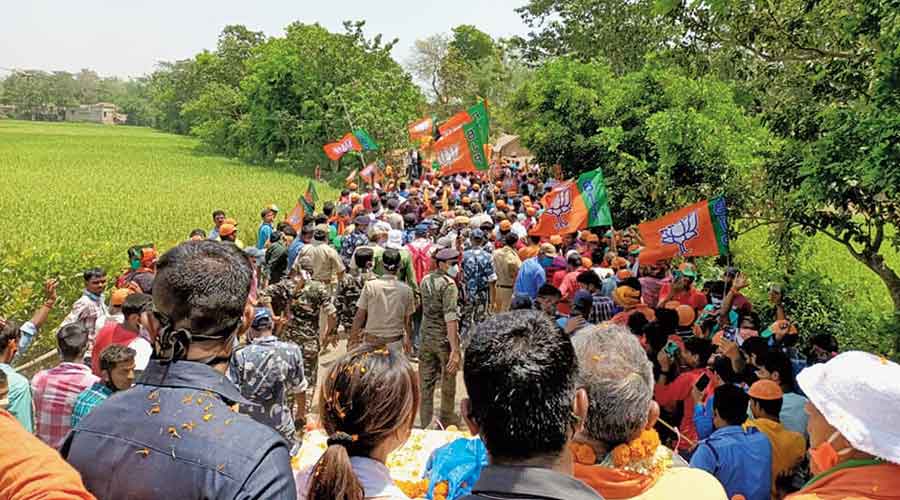 Murshidabad — a key district with 22 seats, with minorities comprising nearly 70 per cent of the electorate — witnessed three rallies by the Trinamul chief, and three more by her nephew and political heir-apparent Abhishek Banerjee.

“This is really sad, that lofty claims are being made by the parties on curbing election campaigns in view of the Covid-19 situation, but none is actually doing anything about it,” said an attendee of chief minister Mamata Banerjee’s first rally of the day at the Jiaganj High School.

Mamata’s rally at Jiaganj was delayed by an hour and started at midday, causing the two others at Sagardighi and Farakka to be delayed as well. All three reported crowds in thousands with practically no social distancing.

“It does not matter whether she speaks for three minutes, or 30 minutes, or 300 minutes, because people gather in thousands for hours before she starts speaking and spend a long time dispersing, in total disregard of the safety norms,” said a middle-aged schoolteacher at Sagardighi who would have liked to attend Mamata’s rally but stayed away because of Covid-19 fears.

“If such people (well-known leaders) come for such events in our areas, and the event is not virtual or televised, people will turn up… in the absence of major restrictions such as a lockdown,” said a Kandi-based shopkeeper, who was part of the crowd for the Irani road show.

The Congress too had plans for two road shows — which would have taken the total of such events in the district to exactly a dozen — but they stood cancelled because its state president Adhir Ranjan Chowdhury is on home isolation.

Of the major players in fray in Bengal, only the Left had sworn off all political programmes that draw crowds, on account of the grim Covid-19 situation.